Set in present-day New York, Five Star blends documentary and dramatic fiction as it tells the stories of Primo (James “Primo” Grant, a non-professional actor and former member of the Bloods street gang), a man fighting the tug-of-war battle between the needs of his family and duty to his gang, and John (John Diaz), a young man taken under the mentorship of Primo due to respect for John’s murdered father, Melvin (who once mentored Primo).

With the effort, sophomore writer and director Keith Miller (“Welcome to Pine Hill”) attempts to capture the honest intensity of gang life that — in the spirit of the cinematography, at least — is almost nostalgic of “The Wire.” Some of what Miller is attempting works: From the inquisitive-but-never-intrusive camera, to the close-up single-shot monologues that let the non-professional actors toil, to the shots of the empty street blocks throughout Brooklyn.

Unfortunately, instead of allowing us to follow these interesting characters throughout their story-arcs, Miller — much like an interfering tour-guide — stops us at each development to make sure we understand exactly what it is we are supposed to understand. And inexplicably with others, he leaves them hanging — never fully realizing their impact.

Five Star opens with a bulky, albeit well delivered, monologue from Primo about missing his son’s birth while incarcerated. This essentially sets the tone — for better or worse — of the entire hour and thirty minutes that we follow Primo through the city. We witness the difficult undertaking he has of balancing the duty he has to his gang, his place in his family and what it truly means to become a man in both of those roles; as well as the even more impossible task he has of delivering the inorganic and overly-exploitative dialogue he is given.

This is a demand that the script asks of each of its central characters. In one scene where John is sitting at the dining table with his mother discussing a summer job at the local supermarket, John’s mother (Wanda Nobles Colon, “Stills” TV series) in a cringe-worthy immediate shift of conversation suddenly asks, “Do you know about safe sex?” Unlike many other discourses, however, the proceeding interaction actually manages to work due to the genuine reaction John Diaz has.

In another, Primo and John are discussing the logistics of a drug delivery when Primo’s autistic son interrupts them. Primo switches immediately from the dutiful “five-star general” persona to caring father that could have been discussing a simple business meeting. This touching sentiment is lost, though, as Miller has Primo further explain, “Yes, he is different. He has autism but I don’t care he is different and I love him anyways.” Certainly he does, but why do we need to be explicitly reminded of this as we just saw it unfold in scene?

Nonetheless, the performance by James Grant and new-comer John Diaz are exceptional and genuine. But while Diaz is fitting in his role, it’s Grant who easily steals the film’s spotlight. Playing a dramatic version of himself, he is dexterously nuanced in his representation for a lead that could easily have been flashy and scenery-eating.

This is a movie that wants to be heard, and that is certain. Five Star has the authenticity and fine leads to elevate it above the archetypal gang movie, but instead of offering a thought-provoking, subtle film that asks its audience to invest in the subject matter, Miller sits the viewer down and lectures them every step of the way. This could (although shouldn’t) be excusable in a summer-popcorn movie, but we need to remember who the audience is here and why we are watching this movie at all (hint, it’s not to be handheld).

“It’s not like they show it on the TV,” Primo tells John towards the end of the movie when their story arcs lead them to an inevitable cross in the road. Indeed, ultimately Five Star could have been something special if Miller had heeded this as well.

A Washington D.C. local and published author who has a unique love for Quentin Tarintino movies and Ryan Reynolds (not together). 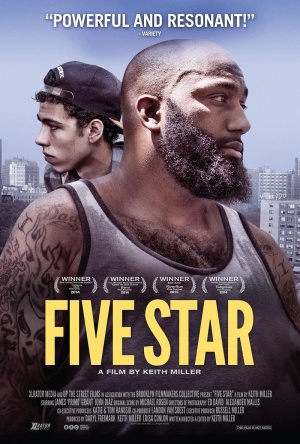