Abbie Cornish (“Seven Psychopaths”) finds herself battling ghosts both metaphorical and literal in mystery thriller Lavender, which manages to be a decent enough flick in spite of its wholly derivative construction. Cornish plays Jane, mother to a precocious daughter (Lola Flanery, “The Mist” TV series), wife to a possibly philandering husband (Diego Klattenhoff, “Pacific Rim”), and nurturer of an amateur photography obsession focused on old country houses. She’s also the lone survivor of a gruesome attack that left her whole family dead and her child self as a chief suspect.

Understandably, she’s repressed such memories, but still feels the resulting intangible emptiness. When she ends up in a rather over-the-top car crash, Jane keeps her good looks while gaining a better understanding of her past. With the help of her husband and daughter and psychologist (Justin Long, “Frank & Lola”), she returns to her childhood home to reconcile with her inner demons. None of this is particularly refreshing or new, but director Ed Gass-Donnelly (“The Last Exorcism Part 2,” who also takes a co-writing credit with Colin Frizzell) has some visual and aural flair to capitalize on creepy happenings.

Twists borrowed from better movies pop up here and there, but again the recycling is handled effectively enough. Such is the case with Lavender. It’s far too familiar to make a strong impression, but low expectations and the general simplicity inherent in unambitious fright flicks makes this a tough one to write off entirely. If that sounds like faint praise, well, then that’s an accurate assessment. There’s little to love here in Lavender, but even if the guessing leads somewhere obvious, the guessing itself is still enjoyable in a slickly scary way.

The horror genre has so many clichés and familiar motifs and stylings by now that one can bypass originality entirely and still create an entertaining experience. This is hardly a significantly commendable approach given how much more interesting originality is compared to recycled genre scraps, but execution is an extremely important element in horror movie making, so less ambitious intentions don’t automatically condemn a fright flick.

I’m not sure I can contort myself anymore to avoid giving Lavender a bad review, but the extent of such contortion so far kind of encapsulates the quality of the movie. While it’s certainly not bad, it’s still lightly forgettable and a mere mish-mash of pieces that will feel familiar to the most casual horror fan. And yet it works on some levels in spite of its predictability. Lavender is a fine watch in enough ways to give it an overall pass, but for a movie about regaining memories, its effect is curiously the opposite. Enjoy the ride while it lasts. Good luck remembering it later though. 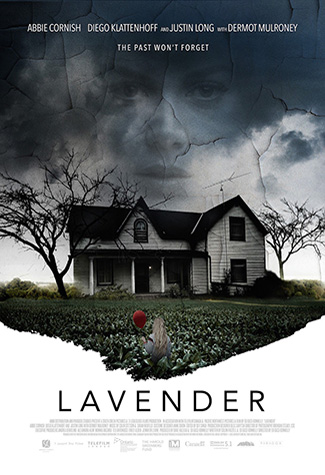