Ah, the simple joys of the family vacation. The great outdoors. The open road. The company of loved ones. The mobile home haunted by the superpowered spirit of a homicidal madman.

Charles (Greg Violand, “Carol”) is the owner of the “Toybox” — a ramshackle RV — and he’s joined by his son Steve (Jeff Denton, “ClownTown”), Steve’s wife Jennifer (Denise Richards, “Wild Things”), and their daughter Olivia (Malika Michelle). Also along for the ride is Steve’s brother Jay (Brian Nagel, “The Accident”). The family ventures into the wilds. After picking up Samantha (Mischa Barton, “Ouija House”) and her brother Mark (Matt Mercer, “All the Creatures Were Stirring”), whose own vehicle is busted, the group makes way for its first stop on the road trip: Cave paintings.

They never make it. It turns out the vehicle has a mind of its own. It breaks down in the middle of nowhere. Outside of civilization, outside of phone signal — beyond the bounds of believable human behavior, in the realm of horror movie irrationality — the RV begins to terrorize the travelers, and each is picked off one-by-one.

Tom Nagel’s supernatural horror entry, The Toybox, has an intriguing foundation — a haunted vehicle terrorizing a dysfunctional family — although it struggles to live up to the promise of its high concept. One hopes for a hint of King’s and Carpenter’s “Christine” (in terms of schlock if not subversion); maybe a sprig of Paul Golding’s “Pulse,” just for good measure. But what could have been funny and scary is a touch too forlorn and shoddy, even if it is buoyed considerably by a talented ensemble and some pleasingly out-there plot developments.

The film starts energetically enough but becomes increasingly dour as the silliness of the conceit collides with the need for characters to shout at the sky and punch tables with rage. The scares are disappointing; both tame and unimaginative. Surely there’s a wealth of opportunities for grisly-yet-relatable deaths in a moving home complete with a cooker, toilet, electricity, gas tanks, etc. — countless ways to imaginatively kill off characters. Instead we get a haunted television feeding us exposition and a dodgy parking brake. And no 20-teens horror would be complete without a bloody-faced stranger with jerky body movements.

The direction is efficient, but rarely impactful. Camera angles and focus fail to maximize a sense of fear, and throughout the film there is no real sense of space — by which I mean it never feels particularly claustrophobic inside the RV, and outside we never get a sense of being adrift in the endless wilderness. Holly Amber Church provides a suitably overwrought, yet forgettable, score which lacks personality and a recognizable hook. It’s an ongoing pity that modern horror scores tend to prioritize texture over theme.

No demon car movie, like The Toybox, would be complete without nonsensical writing. The RV drives on its own, starts on its own and reverses on its own, but it takes an hour for someone to suggest there could be something seriously wrong with the vehicle. In fact, the outspoken Jay remains conspicuously silent in the face of accusations, even though he wasn’t even in the driving seat when the zombie truck took control.

And when the vehicle runs over one of the characters, why not release the parking brake and check? At the very least retrieve the body. But no — more than one character dies before anyone starts discussing practical solutions. Nagel is caught in the quagmire of balancing scenes of grief with scenes of proactivity, creating the strange spectacle of a bunch of shocked characters apparently waiting around for the next horror movie moment.

It is to be applauded that Nagel chooses to kill off the characters you least expect first, and this speaks to the more-than-adequate characterization itself. Tensions are surprisingly textured — like how Jennifer puts subtle pressure on Steve to protect she and Olivia, and this makes him feel emasculated (particularly as Samantha is the mechanic), and this in turn only adds to his character’s believably vein-popping desperation.

Indeed, the film is at its best when horror tropes are set aside and it commits to playing out as a dark family drama. There’s a tremendous scene where Jay confronts his father about his mother; about abandonment. The performances are strong enough to sell such moments, creating a believable family dynamic — to the point where the horror moments don’t so much punctuate as puncture, deflating the drama.

From that horror perspective, it doesn’t help that the family is being terrorized by a character from the BBC’s “The League of Gentlemen,” all bottle-lens glasses and brown teeth. He even has a comb-over. It’s a cartoon element that feels incongruent more than unsettling. And there’s a scene where the RV very slowly chases someone on foot, which represents the most preposterous inability for a character to run sideways since Ridley Scott’s “Prometheus.”

Ending boldly and ridiculously — a proper exclamation mark of a finale, before a lackluster stinger — Nagel’s The Toybox has just enough about it to recommend. Regrettably, its outright horror elements are its weakest card, but it’s a shortcoming made up for in the good performances, brisk pacing and convincing character drama. 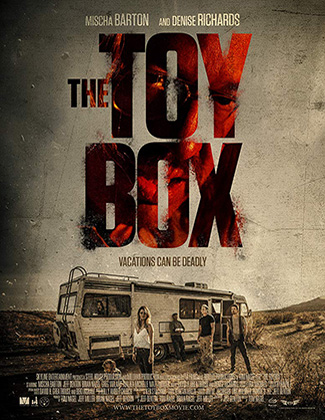