According to award-winning Israeli director Nadav Lapid (“The Kindergarten Teacher”), “art has the right to be chaotic and wild, to go to extreme and dangerous places.” If you are looking for chaotic and wild, you need look no further than his Synonyms (Milim Nirdafot), a mystifying and often maddening film that will either leave you awestruck or looking for the nearest exit. Winner of the Golden Bear and the FIPRESCI prize at the 2019 Berlin Film Festival and Lapid’s first film shot outside of Israel, Synonyms is loosely based on the director’s personal experience of having left Israel for Paris after completing his mandatory military service. As he explains enigmatically, “I left Israel not because of any specific event, but due to its very existence as the embodiment and shaper of ‘Israeliness,’ at the collective Israeli soul, the DNA of being Israeli.”

Co-written by Lapid’s father Haim Lapid, the film introduces first-time actor Tom Mercier as Yoav, an Israeli ex-patriot who wants to shed his identity as a macho Israeli soldier and become immersed in French culture, one that he sees as celebrating the arts. In bondage to his heritage, Yoav carries with him the burdens of being an Israeli with its history and present day political conflicts. Paradoxically, the film does not mention the fact of the resurgence of antisemitism in France and the departure of many Jews to Israel. Ultimately, however, Yoav is no more enamored with Paris than he is with Tel Aviv, and the interchangeable synonyms he constantly repeats reflect the similarity of his experience in both cultures.

As captured by the hand-held camera of cinematographer Shai Goldman (“Doubtful”), the film opens with the view of a young man’s feet walking briskly through the streets of Paris. As he enters an old building near the River Seine and opens the door to his room, there is nothing inside but empty space — no furniture of any kind. Leaving his back pack in the middle of the floor, he does what any normal person would do in a cold and empty house. He strips naked, takes a bath and begins to masturbate until he is disturbed by sounds coming from the next room. Jumping out of the bath naked, he discovers that he has been robbed of all his possessions and frenetically runs through the building knocking on doors for help but to no avail, a suggestion perhaps that Paris will not be as welcoming as he thought.

With nothing left to do to protect himself from the cold, he gets back into the tub in a state of hypothermia and awaits redemption or death whichever comes first. Yoav is jostled back to life the next morning, however, by two young neighbors, Emile (Quentin Dolmaire, “My Golden Days”), the son of a wealthy entrepreneur and a would-be writer and his partner Caroline (Louise Chevillotte, “Lover for a Day”), an accomplished oboist, poster children for the French bourgeoisie. Though Yoav is a total stranger, Emile gives him the clothes and financial support he needs to keep going.

Refusing even to speak Hebrew, Yoav is repelled by Israel calling it “evil, despicable, disgusting, odorous,” among other choice adjectives he learned from his pocket-sized French dictionary. He does not even smile when Emile tells him that, “No country can be all of those things at once.” Possibly suffering from PTSD, Yoav is disillusioned about what he believes to be his country’s obsession with security and takes his anger out on his own body, freezing it, starving it, and prostituting it.

According to Lapid, Yoav is “banging his head against a wall called Israel. But it’s also because he is banging his head against himself.” His diet consists of the same dish every day, a plate of spaghetti with crushed tomatoes, the cheapest meal possible. He advertises for work as a model, but has to endure abuse at the hands of the “artist,” the only one who answers his ad. He is fired from his job as a security agent for the Israeli consulate when he takes pity on a lineup of immigrant applicants who are waiting in the pouring rain. Shouting that there is “no border,” Yoav allows them to enter the embassy without being processed.

Along the way, Yoav meets some fellow Israelis, but they only serve to reinforce his preconceptions. One is tasked by the embassy to create incidents in order to confront gangs of neo-Nazis, while another aggressively hums the music to the “Hatikvah” in the face of Metro travelers interested only in getting home after a day’s work. Though Emile is apparently sexually attracted to Yoav, he does not act on his impulses but, instead, helps him in his desire to become a French citizen by arranging a marriage to Caroline.

In the citizenship class, Yoav has to sing “La Marseillaise” as well as the Israeli national anthem in his own language, but he goes through the motions of reciting the words without feeling or commitment. Synonyms is a polarizing film which basically mirrors Lapid’s view of the Israeli army as a reflection of the nation’s damaged soul. While it lacks a coherent narrative and will test your endurance, Synonyms is a unique experience which raises important questions about the nature of our identity, our ability to come to terms with who we are, and our willingness to celebrate it. 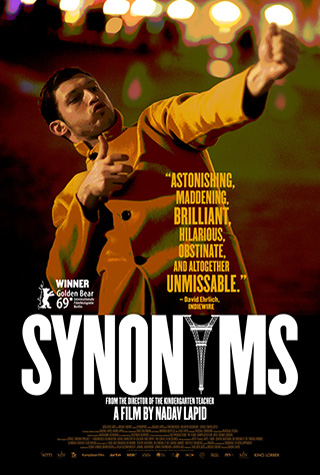