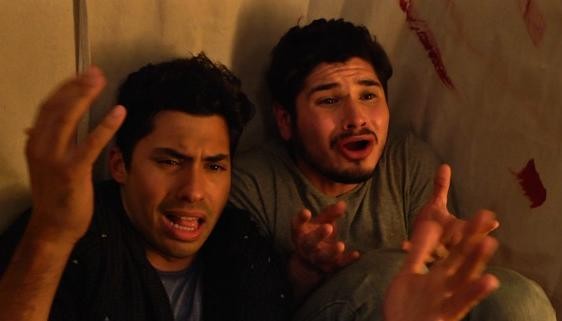 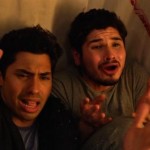 Not having a good day.

And here I thought “A Haunted House” or what has become of the Scary Movie franchise (“Scary Movie 4,” “Scary Movie 5“) was as deep as the horror parody cesspool went. No, to my surprise it apparently goes much, much deeper. Ghost Team One, with its liberal use of profanity (most of which is painfully unnecessary) and half-witted sex jokes, is proof there are yet undiscovered depths.

It’s two main protagonists are Mexican guys because, well, I suppose it is an easier way to make a joke funny when observing that tacos look a lot like vaginas. Sergio (Carlos Santos, “La Agencia” TV mini-series) is a semi-soft spoken, courteous guy who wants to find a respectable girl to love. Brad (J.R. Villarreal, “The Death and Life of Bobby Z“) is a brash, obscenity spewing asshat, whose life’s goal is to make everything around him relate somehow to sex. From their interactions, I’d guess they would not be best of friends if they weren’t roommates in a two story bungalow in suburbanish Los Angeles that they also share with a bigoted, recovering drug addict named Chuck (Tony Cavalero, “Aim High” web series) who hates them both, and a poltergeist of a Chinese prostitute. A horny, Chinese prostitute poltergeist, mind you.

Soliciting the help of local hottie Fernanda (Fernanda Romero, “3 Geezers!“) and some random Craigslist guy with a camcorder (there is a joke in there somewhere, but I missed it like I missed the point of this movie), the boys seek to definitively prove the ghost exists via security cameras — Ghost Team One parrots “Paranormal Activity” — and Ouija board gamesmanship. The roomies also want to score with their co-investigator: Sergio takes the friendly, roundabout route; Brad chooses to take the unabashed, direct route. Neither path, as written by Andrew Knauer and Arthur Pielli, is particularly funny or successful.

That’s partially because for a movie pronouncing so much sex and lewdness from the onset, Ghost Team One is remarkably prudish. If there was nudity I can’t recall (IMDb lists Sarah Chapman as “Flasher” so there may be a quick flash of boob), but what does leave a distinct impression in my head is that during one of the better scenes in which the guys try to “connect” with the ghost, the pornographic pictures taped to the wall from Playboy, Penthouse, Hustler, insert-name-of-random-porn-mag-here were blurred so as to not show the assets of the models. I’m guessing this was done last second during editing due to some warnings from legal over contractual/copyright issues but it highlights the notion that this sex romp has the thrust of an inexperienced teenager. 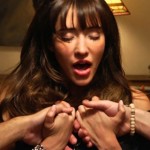 Bad enough, I know, but once it is apparent the big payoff isn’t “coming” (that pun is comedy gold, folks), Ghost Team One abruptly changes course from watching two bumbling idiots trying to get laid to one in which Tony Cavalero sheds whatever self-esteem he may have had to make a complete fool of himself. I won’t give away what he’s shamelessly asked to do in the name of comedy by directors Ben Peyser and Scott Rutherford but it’s not only offensively stupid, it’s actually kinda pathetic. I suppose that’s what you get from expecting too much from inexperienced writers and directors.

Of course, even in the hands of someone more accomplished grand results aren’t guaranteed either. I can say with some certainty, however, they would have done a better job reining in their overly excitable leads and maintaining a more fluid consistency throughout the picture though. That alone would have made this horror spoof all the easier to sit through. Unfortunately, that isn’t the case and in the end, after the final sexual insult is levied, Ghost Team One revealed itself to be just another poorly conceived parody flick. Boo. 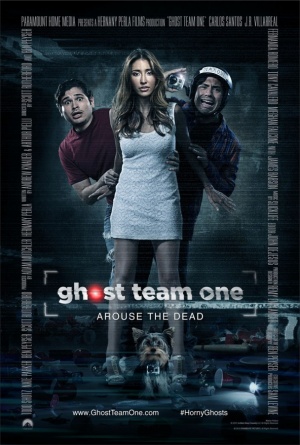