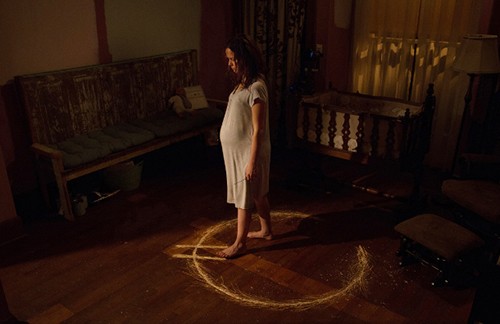 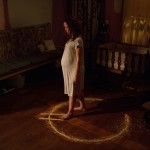 Something evil is coming.

There’s nothing more rewarding than bringing a baby into the world; sure, it’s scary, and it’s a lot of responsibility, but there’s just nothing like it — it’s a life-changing experience. That’s what I hear anyway. I’m not a mother, and I don’t expect to be any time soon, but my friends have kids and they’re amazing people (both parents and kids). The stories my friends tell and the way their faces light up when they talk about their kids are proof enough for me.

So, of course, something as beautiful, uplifting, and rewarding as this experience is going to be ripe for the horror genre. Immediately, one thinks of “Rosemary’s Baby” — directed in 1968 by Roman Polanski (based on the 1967 novel by Ira Levin) — an amazing film that captures the mother’s primal instinct to protect her child. It also illustrates the vulnerability of that same mother who is frightened, unsure, and needs guidance and protection from her doctor and her loved ones. Matt Bettinelli-Olpin and Tyler Gillett try their hand at this familiar trope in Devil’s Due, which is part of the now ubiquitous found-footage sub-genre of horror films.

The film begins with Zach McCall (Zach Gilford, “The Last Stand“) stalking his bride-to-be Samantha (Allison Miller, various television gigs) in that pseudo-creepy/sweetly romantic way cheesy rom-coms teach men that women like (he’s outside her house with a camcorder and breaks into her room the night before their wedding because he just has to see her). He explains that his father had followed his family around with a camera, and while Zach found it weird then, he finds it endearing now, so he tells Sam that he wants to start documenting their family history. Now that the camera presence is explained, the viewers are treated to scenes from their wedding and reception, but the story truly begins on their honeymoon in the Dominican Republic. The familiar excursions and beach trips are documented here, but on their last night, Zach and Samantha find themselves lost and unable to find their way back to the hotel. A friendly cab driver pulls over to help out; once his fares are in the taxi, the driver offers to take them to an exclusive bar where they can live it up for just one more night. The bar is, of course, hidden away behind dark alleys and dilapidated buildings, but it’s full of people having a great time. Alcohol flows freely, and tension builds as we realize Sam’s purse is being stolen with the camera inside; it builds more when we realize that the couple, now unconscious, have been brought into a cavernous room with strange symbols on the walls and floor. An odd ceremony takes place, and our view is cut off after a powerful light emits from the floor at the peak of the event. The next thing Zach and Samantha know, they’re back in their hotel waking to hangovers and the necessity of getting to the airport on time. Life returns to normal as the happy couple gets back to their everyday lives, until Samantha comes downstairs one day with a positive pregnancy test. And so begins the journey toward parenthood, but with more uneasiness and strange “pregnancy brain” occurrences than most doctors would be comfortable with. 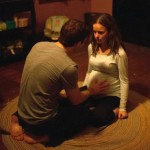 From here on out, Devil’s Due is pretty much what you expect it to be. As the due date approaches, Samantha’s erratic behavior intensifies, from attacking an SUV that got too close in a parking lot to scratching out odd symbols on the hardwoods in the nursery. Violent outbursts that are initially chalked up to common nerves become more concerning as Samantha isolates herself and won’t allow Zach to help or comfort her. We see everything going on between the strained couple because the found-footage from Zach’s camera is supplemented by cameras set throughout the house by strangers keeping watch over the expectant mother. They’re also keeping steady watch over the outside of the house, as we discover with Zach late one night. The irony of the whole format in Devil’s Due is that we are never given any explanation as to how the footage is eventually “found.” You have police interrogation footage blended with Zach’s “family history” footage blended with the “security” cameras installed without their knowledge, but no rationale as to how it came to our collective awareness. There’s even one extraneous hiking scene blended in that, while disturbing in its own way, is dropped into the narrative with no transition or explanation before we’re returned to the footage of the house. If you’re so inclined, you find your own ways to explain it away, but generally, you’re still left with a feeling of, “What the heck was that about?”

Having seen so many films of this sub-genre, I didn’t go into Devil’s Due with the highest hopes, but admittedly, there were a few moments where I was pleasantly surprised by the effective tension produced by Zach’s and Samanatha’s experiences. Overall, however, there’s nothing new for fans of a good jump scare and people creeping around in the dark. It’s all been done numerous times before, and usually with more panache. If you were intrigued at all by the trailer and just want to see something that will help you pass away the time on a discount-day at the theater, this might do the trick — don’t expect much, though, in the way of creative writing or impressive acting. If you’re looking for a great horror flick to get under your skin, I’m afraid that, like me, you’ll have to stick to old classics like “Rosemary’s Baby,” and keep waiting, hopeful that there’s a new classic somewhere on the 2014 release calendar. 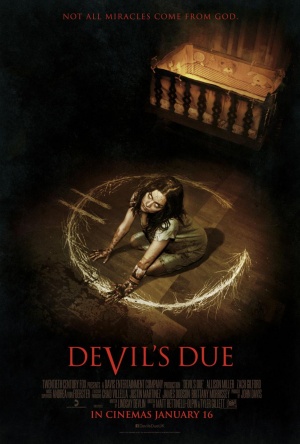