On their honeymoon to Miami, Holly and Trevor Davidson (Graci Carli and Rod Luzzi) decide they’re going to try out all the touristy things they can find. After being disappointed by a shoddy palm reader (because visits to psychics is a touristy thing to do), they encounter a strange man in the street who suggests they visit Vjestica (Barbara Van Fleet), an old woman who can truly tell them their future. Trevor documents their arrival with his trusty camcorder, as Vjestica greets Holly by name and leads her into the house. Something traumatizing occurs, and Holly runs screaming from the house, never sharing with Trevor (or with us) what happens. In the days that follow, the newlyweds discover she is pregnant and, forgetting their nightmarish experience in Miami, they soon begin planning for their new family with Trevor’s parents and younger sister who have gifted them with a new home and a freshly decorated nursery.

But, of course, what’s a horror movie pregnancy without a woman exhibiting strange behavior?

Holly becomes very intense and agitated, destroying the nursery in a fit of rage and verbally attacking her aunt at her baby shower. Meanwhile, she drinks wine, smokes cigarettes, and makes sexual advances on both her father-in-law and young sister-in-law, Marissa, and blames it all on hormones. Concerned, Marissa (Emily Rogers) works to enlist Trevor in a plan to get Holly some help and to save their family from a dark curse.

The Devil Incarnate fails on every level, but mostly because every last element associated with horror film curses is used — strange symbols, women speaking in tongues, blood sacrifices, unexplained family lineages, and, you guessed it, rituals that also involve all of the above — with reckless abandon. Oh, and let us not forget first-person camerawork . . . we can’t leave that now-horror-norm out of the discussion. Once Trevor and Holly return home from their honeymoon, the responsibility of documentation falls to Marissa, a generalized “emo” teen who creeps around her own house like an intruder (yet, as evidenced by the rest of the film, she is clearly part of the family, so her sneaking around is either a poorly developed character flaw or a shameless way to get more found-footage into the movie). Jon Bosworth’s story forces exposition through Marissa’s FaceTime conversations with a friend who finds out everything we need to know (Google to the rescue!) about Holly’s weird past (which isn’t much). The conversations are absurdly brief and are a lazy technique to show us how disturbed Marissa is by Holly’s behavior. Her “plan” to save Holly includes a rushed visit back to Vjestica’s house to return an amulet necklace and a somber breakfast in a diner during which Trevor spots the strange man who directed them to Vjestica in the first place.

Characters appear and disappear in the story with little to no rationale, including Trevor’s and Marissa’s generous parents who can’t leave the house fast enough one day and Holly’s aunt who brings an apparently very disturbing, but never-explained, ceramic doll as a baby shower gift. To top it all off, an abandoned frame story is presented in the beginning that is never sufficiently closed — the viewer is left to fill in the chronological gaps between the end of the story and the movie’s introductory scene set in a police interrogation room. The bigger mystery is why we watched this movie to begin with.

There have been plenty of films that try to blend the uncertainty and anxiety of having children with demonic possession and curses, and every single one of them has done it better than The Devil Incarnate. Bottom line, if the pregnant woman in question isn’t named Rosemary and hasn’t been brought to your attention either by a filmmaker named Polanski or by an author named Levin, just stay far, FAR away.

'Movie Review: The Devil Incarnate (2013)' has no comments 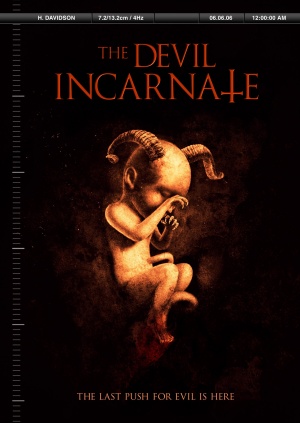