Most recently used as the filming location for “The Martian,” the Wadi Rum (pronounced Ramm) desert in Jordan was described by actor Matt Damon as, “one of the most spectacular and beautiful places I have ever seen, and like nothing I’ve ever seen anywhere else on Earth.” It is this awe-inspiring background shot by cinematographer Wolfgang Thaler (“Paradise: Hope”) that is the location for first-time director Naji Abu Nowar’s masterful coming-of-age film Theeb, one that has been described as an “Arabic Western.” Co-written by Nowar and Bassel Ghandour, it is the story of a young Bedouin boy who must fight for survival against unknown enemies in the stark, unforgiving desert where “the strong eat the weak.”

Theeb is set in the Arabian Hejaz Province during World War I just prior to the Arab Revolt for independence from the Ottoman Empire. It is the time when British soldier and archaeologist T.E. Lawrence fought for Britain against the Turks and championed the cause of Arab independence. Theeb (“Wolf” in Arabic), an expressive boy about ten remarkably performed by Jacir Eid Al-Hwietat, is the youngest son of the late chief of a Bedouin tribe somewhere on the Arabian Peninsula. Unlike David Lean’s “Lawrence of Arabia” which favored the cause of Arab nationalism, Theeb appears to support the traditional cultures that have lasted for thousands of years.

The film begins as Theeb’s older brother Hussein (Hussein Salameh Al-Sweilhiyeen) teaches him to shoot a rifle and kill a goat. In the background, a voiceover delivers another type of lesson: “In questions of brotherhood never refuse a guest,” the narrator tells us. “Be the right hand of the right when men make their stand. And if the wolves offer friendship, do not count on success. They will not stand beside you when you are facing death.” When two travelers, British officer Edward (Jack Fox, “Blood Moon”) and his Arabian guide Marji (Marji Audeh), come to their father’s home, Hussein follows the teachings of hospitality to strangers and agrees to guide them on an undisclosed mission to the “Roman Well,” located along the old pilgrimage route to Mecca.

Shot from the boy’s perspective, the mischievous Theeb secretly follows them but tension erupts quickly when he receives a stern warning from the Englishmen after playing with the small mysterious wooden box he is carrying. When the travelers discover that the well is red with the blood of the men the English soldier was supposed to meet, they know they are being watched and must prepare for a shootout with deadly consequences. Left alone after he is separated from his companions, Theeb is at the mercy of a wounded Turk (Hassan Mutlag Al-Maraiyeh) known only as “The Stranger,” and is uncertain whether the Turk is friend or enemy.

In an interview, the director described the moral dilemma and asks the question, “What would happen if you were stranded with your worst enemy but needed their help to stay alive? Surprising plot twists and deepening adventure leads us to the answer. Winner of the Venice Horizons Award for Best Director and Jordan’s submission for Best Foreign Language Film at the 2016 Oscars, Theeb is not only a coming-of-age story but a film with a powerful message about a traditional society on the cusp of change and, for the Bedouin pilgrim guides, a lament for the loss of a way of life. The loss is palpable as the trains they call “The Iron Donkeys,” invade the great silence of the desert and, with their thick black smoke, like a veil of tears, hide the ineffable beauty of the night sky. 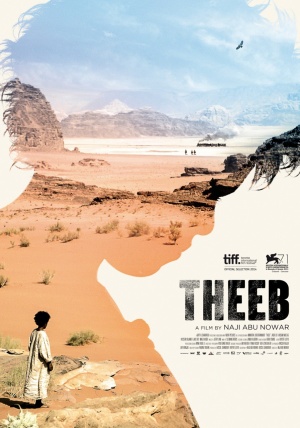