Can number three keep pace with its predecessors? Well, they say the third time around is a charm, right? Right?

Well, not always. This time around our lovable ogre Shrek (Mike Myers) sets course with his trusty sidekicks Donkey (Eddie Murphy, “Norbit”) and Puss In Boots (Antonio Banderas) to find the heir to the throne of Far Far Away, Arthur (Justin Timberlake, “Alpha Dog”). Along the way, they find themselves in a host of situations, some funny, some not so. However, while they’re out, Prince Charming (Rupert Everett), who still simmering over his losses in the previous movies, devises an ingenious plan to take over the castle and set himself as king. It’s up to Fiona (Cameron Diaz) and her girlfriends to save the kingdom while her husband is away.

As expected, visually Shrek the Third delivers fantastic CGI (computer generated imagery). Stunning landscapes, fluid motions and a keen attention to detail are all accounted for. Yet, I couldn’t help but want more. The graphics, while extremely well done, are basically the same as the previous movies. I’m from the school of going above and beyond and I felt the animators should have added a new ‘WOW’ factor. You can’t sit on your past triumphs in this town if you want to stay ahead of the game.

Also, as expected, we’re given a very healthy dose of adult humor, wrapped around innuendos and read-between-the-lines dialogue (we’ve got to trick the children of course). As with all movies, some jokes hit and some miss. Mostly, the antics in Shrek the Third are singles intermixed with a few doubles; the only home run I can think of was during the Pinnochio interrogation — even I was getting confused with all the double speak. Yet as stated previously, while there are funny moments, I’ve basically seen the same material in the first two movies.

What I was pleasantly surprised by was the influx of new characters. I suppose it has to be done to keep things fresh, nonetheless, some interesting characters make their debut. Fiona surrounds herself with Sleeping Beauty, Cinderella, Rapunzel and Snow White (reminded me of the Fox Force Five from “Pulp Fiction”). Prince Charming amasses a group of ne’er do wells in which Captain Hook, Rumpelstiltskin, the Wicked Witch and even Geppetto (among many others) are a part of.

In closing, it seems almost ridiculous that I’ve reviewed Shrek the Third. This movie is a beast and it doesn’t matter if it receives so-so or poor reviews; everyone and their mother will flock to the theaters to see it. And so long as my Apple Jacks box has big Shrek head on it, this film will make money — gobs and gobs of it. It’s only question mark is, will it be able to sustain the momentum when “Pirates of the Caribbean: At World’s End” comes out later this week? 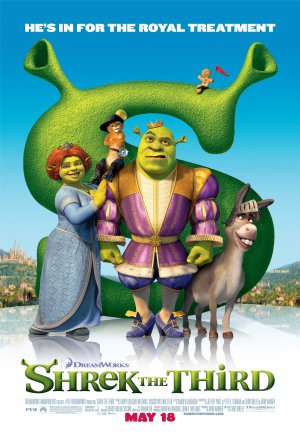