I’ve been fired from a few jobs in my 36 years of life. There was this time I got canned from Tile City for ‘purposely’ breaking ceramic tiles. There was another time I was escorted off of a construction site for cursing off the foreman. It was so bad I was removed from the IBEW! Seeing as I had my experiences with losing my job, I figured it would be fun to watch Fired! and see how other people reacted when they got kicked to the curb.

The movie starts off simply enough: Annabelle Gurwitch is being told by Woody Allen that her voice is too high pitched and that she looks like a retard when saying her lines. Ultimately, he wouldn’t be needing her for his new play. So after wallowing in her despair for a few days, Gurwitch decides to seek solace by talking to her friends, then ordinary people and policy makers. Through it all, she realizes that, as with all traumatic experiences, making fun of it and ultimately finding humor in it helps one cope. Hell, you can even make a living off of it . . .

But let’s cut to the chase. The problems with Fired! is tri-fold. First and foremost, Annabelle Gurwitch is one annoying lady. Woody Allen is correct when he said her voice was painful to the ears. I found it very distracting and it actually made the movie seem so much longer than the 71 minutes it is (this is very bad for a documentary). Secondly, Gurwitch tries like hell to be funny in the same vein as the mock interviews done so brilliantly in shows like “The Daily Show” and “The Colbert Report.” She fails miserably. Lastly, I felt only an egotistical whiner would make a spectacle about themselves getting fired. I felt zero compassion for her — hell, she’s an actor for Christ’s sake! If you decide to pursue that as a career, you should expect to be unemployed or at the very least be prepared for some major setbacks.

There is but one saving grace to Fired! and that is the segments in which she is able to parade her showbiz friends in to recant some of their bizarre firings. Hearing Tim Allen recall his short few days as a union pin fabricator is funny. Not so much as to why he got fired but more as to his convoluted work theories. Andy Dick is always great for a few laughs, even if his segments were a bit too long. The David Cross scene is insightful in a wacky sort of way. He recommends a few activities to pass the time, that may be of use to us all (even in times of peace):

Illeana Douglas takes the cake though. She reminisces about her time as an Armani model and — believe it or not — a coat checker. I literally laughed out loud as she walked through what she did to get canned from these jobs that required zero skill.

Aside from a few intermixed moments of insight or laughter, Fired! is rather boring and bland. Annabelle Gurwitch is not an accomplished interviewer. This greatly detracts from the serious parts of the movie when she is interviewing the General Motors workers in Lansing, Michigan. She is also not much of a comedian. Lucky for her, she has got quite the cast of famous friends who were willing to put their faces in her movie (not so lucky for them). If this movie were a job, I’d recommend doing a preemptive strike and not even show up for the first day of work (skip this movie). Find yourself another place of employment (watch another movie). 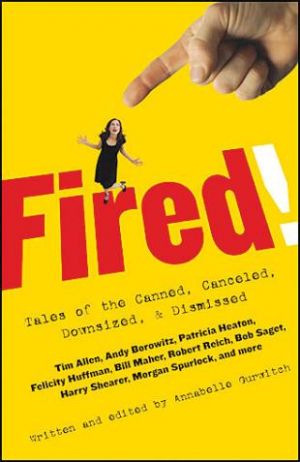