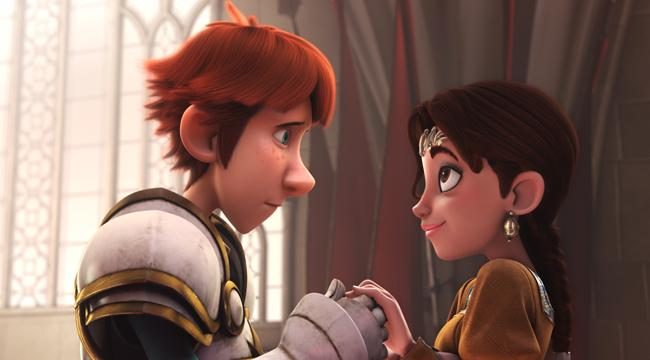 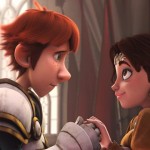 For all red-headed wannabe knights — there is hope!

Justin (voiced by Freddie Highmore, “The Spiderwick Chronicles”) is not the most heart-throbbish animated character to grace the screen. His red hair is styled in a bowl-cut (perhaps to avoid Carrot Top mentions) and his ears are a bit pointy. Fortunately, the young boy has a dream and knows how to enjoy a front lawn breakfast with his distinguished lawyer father. The dream? To become a Knight.

Second-time director Manuel Sicilia joins forces with producer/voice actor Antonio Banderas for a story about self-respect and becoming a man. The father of Justin, Reginald (voiced by Alfred Molina, “The Sorcerer’s Apprentice”), sports a magnificent Clark Gable-like pencil mustache, which oozes supreme class, but is far from tough on his young son who dreams of Knight immortality. Reginald simply wants him to follow in his own lawful footsteps, after all, Knights were done away with long ago, including Justin’s grandfather Sir Roland, but one can’t expect a kid to give up on his dream by attempting to push him in another direction. He will only push harder and do so with honor and vigor!

One may find it difficult to become attached to Justin in the first twenty minutes of the film. He is not especially funny and is outshined by flamboyant Sota (voiced by Rupert Everett, “Wild Target”), who bears a striking resemblance to Tom Hiddleston’s Loki of Marvel’s “Thor” fame — in both appearance and personality. “Power and style!” Hmm.

Yet, despite Justin’s early bore factor, he comes to life when meeting the radiant Talia (voiced by Saoirse Ronan, “The Grand Budapest Hotel”), and her illustrious Eagle Inn head ware. Throw in a wizard with a split-personality disorder and all are in for a swell time.

Justin and the Knights of Valour reaches new heights once the action is taken to the almighty Tower of Wisdom. Sure, it’s not the most original name for Knight Headquarters, but characters like Legantir and Blucher add intrigue as Knights who are devoted to finding the next master swordsman and defender of the order. Director Sicilia delivers with a jolly training montage, which features Justin in full meditation mode with palms to the sky.

The main problem of the film is that Justin doesn’t have any unique characteristics other than his own determination. Perhaps that’s the point, however, youngsters are more inclined to remember the woman with an eagle on her head or perhaps the multi-colored, multi-personality mystic named Melquiades (voiced by David Walliams, “Dinner for Schmucks”). Those are memorable characters. Even the elderly Blucher is more intriguing than Justin. And then there is the Loki rip-off. Another problem is the settings. While everything is vibrantly animated, the film is at its best during the Tower of Wisdom scenes, and it would have been nice to see Justin spend more time on this sacred land with the makeshift crocodile dragon. Bring the action to the Tower of Wisdom! Bring Loki to the Tower of Wisdom!

Manuel Sicilia has made a satisfactory film with Justin and the Knights of Valour, and as noted, there is certainly an abundance of memorable characters. All Justin needs is a little more bravado and pieces of flair (see “Office Space”). The wizard Melquiades provides plenty of laughs and all the pieces are in place for a bigger and better sequel. That seems to be the catch-phrase for all animated sequels. BIGGER. BETTER. Let there be “Justin and the Mutated Knights of Valour!”

'Movie Review: Justin and the Knights of Valour (2013)' have 2 comments 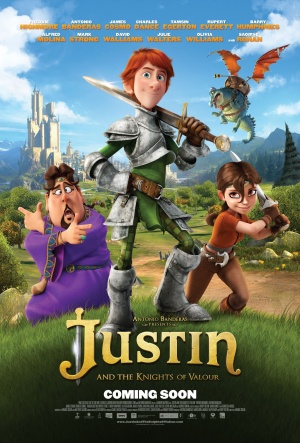