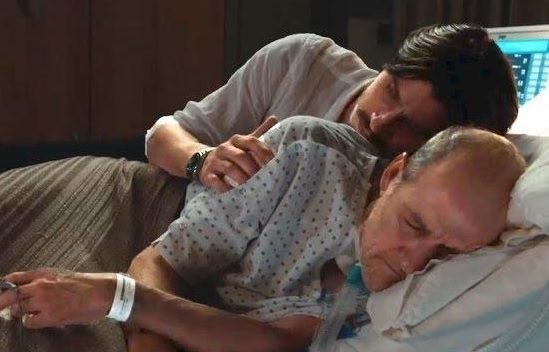 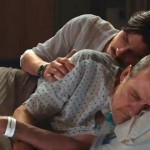 The Garrett Hedlund Dilemma: How To Avoid Outlaw Clichés and Maximize Potential.

Does the above text currently exist? No, not yet it doesn’t — but the world of cinema may demand it by 2015. The opening scenes of Andrew Levitas’ feature debut, Lullaby, have Mr. Hedlund mirroring the roles of “On The Road” and “Inside Llewyn Davis” with the usual eye squinting, chain smoking, hair blowin’ in the wind and smirking that would make Brad Pitt jealous. We don’t want Mr. Hedlund to forever remain a poor man’s James Dean, so what can be done? The answer, my friends, lies in the remainder of Andrew Levitas’ Lullaby.

Musician Jonathan Lowenstein (Hedlund) returns home to visit his cancer-stricken father (Richard Jenkins) and reconnects with a loving mother (Anne Archer), a corporate sister (Jessica Brown Findlay) and ex-girlfriend (Amy Adams). The emotionally fragile Jonathan struggles with anxiety and feelings of inferiority, which only intensify when his father expresses a wish to end his life within 48 hours.

Richard Jenkins, ever the consummate acting pro (even though he isn’t always credited as one), is a fine centerpiece for any director, especially a first-timer such as Levitas. Truly a must-watch actor, the performance of Jenkins as the ailing patriarch demands undivided attention. Surrounding Jenkins’ Robert Lowenstein, is a top-notch cast led by the aforementioned Mr. Hedlund as well as Amy Adams, Terrence Howard, Jennifer Hudson, Anne Archer and the extraordinary Jessica Brown Findlay. The lovely Adams, usually terrific (most recently in “American Hustle”), unfortunately falls flat in the little screen time afforded her and has poor chemistry with Hedlund. Terrence Howard also does little to impress, but is a safe choice as the warm and tender attending doctor. The trifecta of Hudson, Archer and Findlay are simply fantastic though, as women who bring life and humor to the ever present dark scenarios. Findlay’s “Please don’t die” speech is both oddly funny and heartbreaking at the same time.

The situating of all these characters from a central location (for the most part), however, is a wise decision of Levitas as it prevents the film from becoming a typical New York City holiday film of familiar faces. It also provides a great backdrop for the emotionally charged performance of Hedlund.

The true revelation of Lullaby lies within Levitas’ ability to capture small moments of despair, which speak volumes about the mental framework of the characters. A hospital room scene involving Meredith (Jessica Barden), a young woman with terminal cancer, is especially moving — a “pause and weep” moment, if you will. When Hedlund’s Jonathan seeks to remove himself from the confines of his father’s hospital room, he turns to Meredith and her escape is somewhere entirely different.

While the heavy moments of Lullaby will draw tears from viewers, Levitas could have trimmed the 117-minute running time by removing airplane and performance scenes altogether and extending scenes between Jonathan and Meredith, or among family members. Overall, however, Lullaby hits all the right notes, it’s just the lyrics — as profound as they are — often suffer from a lack of punctuation. 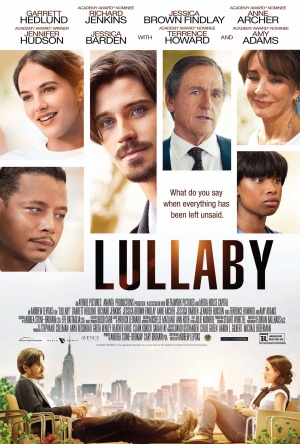