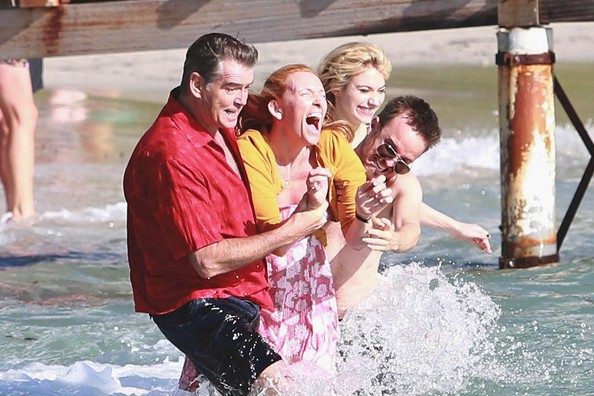 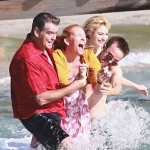 Suicide is no laughing matter. Neither is A Long Way Down, a movie that uses it as a jumping off point to bring together four people whose individual plights are supposed to draw sympathy and whose differences when combined are supposed to create laughable conflict. Of course, it’s not a comedy in the strictest sense, but it’s not a drama or a romance for that matter either. It’s basically 96 minutes of sugary drab.

The players, as pulled from the Nick Hornby novel of the same name by screenwriter Jack Thorne, are Martin Sharp (Pierce Brosnan, “The World’s End” ), Maureen Thompson (Toni Collette, “The Way Way Back”), Jess Crichton (Imogen Poots, “Filth”) and J.J. Maguire (Aaron Paul, “Need for Speed”). Martin, we come to learn, is a maligned television personality, Jess is a scorned, pampered party girl, Maureen feels helpless and invisible, and J.J. doesn’t know what his real problems are. It doesn’t really matter that we know what troubles any of them though, as 30-minutes into A Long Way Down it isn’t so hard to wish that the majority of them had taken the plunge off of the London rooftop they meet atop of.

Anyways, in a moment of brotherly love or maybe stage fright they all agree to not get suicidal again until the next holiday, in this case, Valentine’s Day (because the only honest thing about the movie is holidays are the most depressing for the depressed). Somewhere along the line, the greater public cares about “The Topper House Four” as they become known in part due to Jess’ dad (Sam Neill, “Escape Plan”) being a local politician, Martin being the shamed celebrity desperate for the limelight that he is and a story of Matt Damon faced angels. During this whirlwind of fame — getting a spot on Martin’s old show now hosted solo by Rosamund Pike (“Jack Reacher”) and an island escape — director Pascal Chaumeil does manage to give some alone time to each to provide their backstories.

The only one, however, that has any meat to it involves Maureen. She has an adult mentally and physically disabled son and I suppose her selflessness makes her sympathetic, especially later in the film. Toni Collette plays the role seriously — which such a role should demand — it’s unfortunate, however, that her co-stars and director don’t take the subject matter quite so seriously. Pierce Brosnan replays the charming, aloof role he’s mastered in every rom-com he’s been in yet again and Aaron Paul broods to the edge of being campy (apparently the only way he knows how to act as of yet). As for Imogen Poots, well, I’ve no idea what in the hell she was doing flirting from one hysterical extreme to another. She’s proven to have some acting chops, but here I just wanted her to stop and in the dark recesses my brain I gleefully imagined the other three had a side pact to kill her.

Naturally, there isn’t and they don’t and A Long Way Down ends as you’d expect a silly little Hollywood-ized movie about dealing with life’s terrible troubles should end. From where I’m sitting though, that’s taking the easy way out on a subject that doesn’t end so neatly. 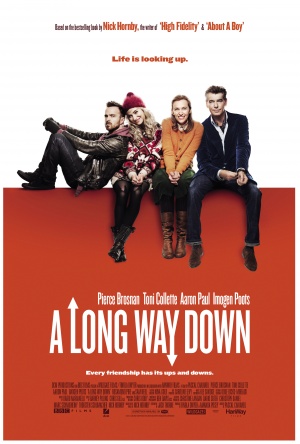