When writing about the death of Abraham Lincoln, poet Carl Sandburg said, “A tree is best measured when it’s down.” These words more than apply to the life of photojournalist Chris Hondros, a Getty war photographer and two-time Pulitzer finalist, who left a gaping hole in the world of journalism when he was killed by mortar fire in Libya in 2011. Directed by fellow journalist and long-time friend Greg Campbell with Jake Gyllenhaal and Jamie Lee Curtis listed as Executive Producers, the documentary simply called Hondros is a moving tribute to a man who inspired people not only by his iconic war photographs that captured the humanity of people caught in the middle of conflict, but by the dedication and compassion he displayed in his life.

Winner of the Audience Award at the Tribeca Film Festival, Hondros takes us behind the scenes and sheds light on one of the most risk-taking professions in the world where journalists, who used to have a safe haven while covering conflicts, have become targets of kidnapping and torture over the past decade. Adding to the immediacy of the experience, the film contains footage of Hondros in different periods of his career. Backed by the original score of Jeff Russo and the cinematography of Mike Shum, it is footage that produces in us a visceral reaction to the chaos and insanity that he was part of day after day. While Chris was passionately involved in his work, however, he did not let it run his life.

A lover of classical music and an avid reader, Chris had a sense of humor that allowed him to keep events in perspective. Beginning in Kosovo in 1999, and continuing in almost every theater of war for the next ten years including Iraq, Afghanistan, Liberia and others, friends and colleagues speak about his unswerving devotion to his craft and his ability to touch people with his sensitivity and humanity. He was there at ground zero on 9/11, the Arab spring in Egypt, and at the brutal civil war in Libya, where an assault by pro-Gaddafi forces ended his life, only a short time before he was to be married. His mother comments in the film that Chris lived a fuller life at age forty-one than many who live until one hundred.

The film shows Hondros’ heartbreaking photographs of five Iraqi children left bleeding, their bodies and spirits broken in Tal Afar, Iraq in 2005 when their car was attacked and their parents killed by U.S. soldiers who feared they were suicide bombers. Sadly however, Chris reported the cavalier attitude of many American soldiers, “Almost every soldier in Iraq,” he said, “has been involved in some sort of incident like that or another, I would say. Their attitude about it was grim, but it wasn’t the end of their world. It was, ‘Well, kind of wished they’d stopped. We fired warning shots. Damn, I don’t know why the hell they didn’t stop. What’re you doing later, you want to play Nintendo? Okay.’ Just a day’s work for them. That stuff happens in Iraq a lot.”

The Iraqi photos, however, which received widespread publicity in the U.S., defined the inhumanity of the war and may have helped change public opinion about it. The Army soldier who took part in that bloody massacre is interviewed and cannot hide his deep sense of guilt and regret. One of the most iconic shots of Hondros’ career is that of a young man in Liberia jumping for joy after launching a grenade from a war-ravaged bridge. It was a famous photo that appeared on the cover of Newsweek and the front page of The New York Times, the Washington Post, and the Los Angeles Times. It was the catalyst that propelled peace negotiations in Liberia and led to an end of the civil war.

Years later, Chris went back to Liberia and looked up the man he filmed on the bridge, discovering that his name was Joseph Duo. The two became friends and when Chris found out how directionless his life had become, paid for him to attend high school, college and law school, studies which led to his present job as a police director in his area. Filmmaker Andrei Tarkovsky asked “What is art?” and then answered, “A declaration of love — the consciousness of our dependence on each other. A confession. An unconscious act that nonetheless reflects the true meaning of life-love and sacrifice.” In that respect, the life of Chris Hondros and what he left behind — a legacy of compassion and mutual understanding that transcended all the suffering he encountered — was a true work of art. 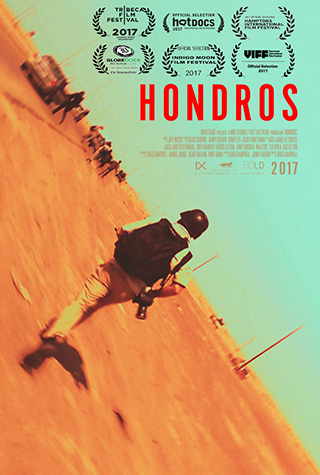