“Even though I am poor and I have AIDS, I am happy. Each day brings hope.” — Liu Ximei

Ximei, a documentary filmed in China over a seven-year period by Andy Cohen and Gaylen Ross, follows the HIV-positive titular protagonist and plain-spoken community leader named Ximei, a local “peasant” woman in her thirties. Ximei is filmed as she negotiates the government bureaucracy in remote Henan province while acting as a community activist and advocate for the 300,000 other people in the region that developed HIV/AIDS as a result of a national government program during the 1990s, whose goal it was to increase blood bank reserves at a minimal cost. The program offered a month’s wages (about five dollars) to blood donors. Tragically and stupidly, the public health workers in the province didn’t decontaminate their transfusion equipment. As a result, many local residents that took advantage of the opportunity to earn extra money, contracted HIV, either from coming in contact with contaminated medical equipment or by receiving transfusions of untested, tainted blood during treatments for an accident or disease. It took a lot of determination and wherewithal for the filmmakers to endure filming in order to uncover this scandal, made more difficult by efforts on the part of the Chinese government to obfuscate the problem or sweep it under the rug entirely. In this regard, it isn’t a stretch to designate the filmmakers as heroes as well.

Filmed decades after what was slated to be a public health program, the crew operates under challenging, sometimes hostile conditions. The camera follows Ximei as she leads protesters to complain about understaffed treatment centers and insufficient amounts of medication. Medicine is meted out only once a month, and the poorer members of the province can’t even afford the “co-pay” for a one-month supply. To exacerbate the incompetent way government officials deal with the epidemic is the policy that recipients of anti-viral drugs must fill out elaborate medical forms even though many of them are illiterate.

Amid this morass, Ximei works as a one-person community advocacy group. Her outreach projects include creation of a modest, minimalist “half-way house” for patients who can’t meet their minimal living expenses (entire families may have no breadwinner), or who simply need a place to rest on their forays to and from government medical centers. Ximei is gaunt and her legs are a bit wobbly, but her optimism and dedication are nearly preternatural. She dispenses wisdom to her community that is as thoughtful and helpful as any professional community outreach worker with an advanced degree in public health or psychological counseling. In fact, her compassion is so sincere and palpable that it practically oozes from the screen. Ximei manages to keep up the spirits of patients in her community whom she easily befriends owing to her calm, caring nature. She organizes festive events, including weddings and other celebrations. She conducts impromptu counseling sessions, even recommending that patients do “journaling” as a means of therapy. In the United States, Ximei would garner much positive media attention. If she had a Facebook page, it would overflow with thousands of “friends,” and if she possessed a Twitter feed, she’d have a multitude of followers. This is not to mention that the walls of her home would be overlain with dozens of certificates of appreciation and celebrity photos. In China, though, she barely has a home. She is harassed by local politicians who monitor her travel, and even assign an agent to surveil her daily activities.

A dramatic demonstration of Ximei’s resolve is her challenge to official admonitions that she not travel outside her community to engage in social protest or advocacy. Despite government efforts to shroud her activities, Ximei manages to travel as far as Geneva, where she discusses her efforts with a program manager from the International Service for Human Rights, who lauds her resiliency in a hostile environment, and seems to understand that what Ximei is up against is more than a disease. However, it’s not clear if he understands (or if any outsider could understand) it’s not only official policy that Ximei has to battle, but the fact that in China, the populace stigmatize people with AIDS, a way of thinking that exists even among health care workers. However, Ximei is no officious do-gooder nor is she easily discouraged. As she and her partner walk around Geneva, she stops and points out to him, the smooth, decorative pebbles that ornament an office park. As she marvels at their aesthetic appeal, she remarks that she’d like to take a few back home. Is it any wonder that the directors of the film chose her name for the documentary’s title or to frame their story?

What makes this documentary exceptional is that the camera records Ximei’s ordinary experience that — given her situation — is quite extraordinary. The film also demonstrates that the popular idea — fashionable in the mainstream media — that the Chinese have worked a “miracle” by modernizing their society is in large part due to news censorship that hides China’s “dark side.” Control over what constitutes news is more easily achieved in its state-run society with a highly-controlled press. An example of the restrictions on recording information occurs when the filmmakers, working through their interpreter, are told they are no longer welcome in the region. Not that local or national government politicians come across as malicious authoritarians. The Chinese have deftly recognized images of authoritarianism as “old school.” Instead, they present themselves as benevolent dictator types. For example, a local mayor amiably claims he can’t understand why Ximei organizes and participates in local demonstrations on World AIDS day, when she gets more attention and consideration than anyone in her community.

With Ximei, Cohen and Ross have assembled a social and cultural snapshot of a situation unlikely to be headlined in the international news section of a newspaper or on informational websites. Even if one could find information about this humanitarian crisis, it couldn’t capture the sights and sounds of the remote, underdeveloped community of Henan province or the low-key battle between a woman with dignity and optimism and an incompetent bureaucracy. The documentary isn’t slick, nor does it contain mind-boggling optics or glossy computer graphics. It doesn’t need to. The people and the message shine through. 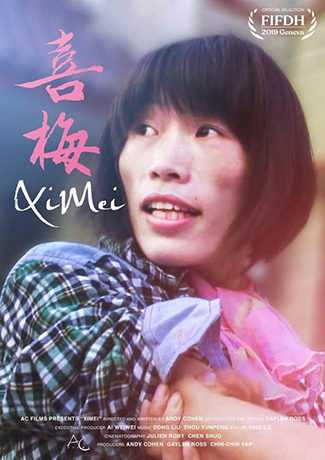