“I feel the air flowing for life’s in full swing, so tell me why I cannot breathe” — Kate Rusby, Falling

Since the dawn of human history, men’s ability to suppress the rights of women has been a measure of their power. Despite our social advances, even today women are often put into categories such as, as author Estela Welldon describes it, “Mother, Madonna, or Whore.” Accusations of being either cold and prudish or seductive and manipulative obscure the fact that sex for women is as natural and healthy a form of self expression as it is for men. Unfolding against a backdrop of adolescent sexual repression, rebellion, and loss of innocence, Director Deniz Gamze Ergüven’s magical first feature Mustang tackles the issue of gender inequality that women all over the world have to confront, the title symbolizing their strength and untamed spirit.

Co-written by the director and Alice Winocour, the film is set in a rural Turkish village near the Black Sea, and takes place in a conservative patriarchal culture that discourages the expression of femininity other than in fulfilling traditional gender roles. Though Mustang is filmed in Turkey and spoken in Turkish, because France is the director’s adopted country, it was France’s entry for the Oscars Best Foreign Language Film award in 2016. In the film, five orphaned teenage sisters, Lale (Günes Sensoy), Nur (Doga Zeynep Doguslu), Ece (Elit Iscan), Selma (Tugba Sunguroglu), and Sonay (Ilayda Akdogan) are being raised in the countryside by their uncle Erol (Ayberk Pekcan, “Winter Sleep”) and their grandmother (Nihal G. Koldas, “Kuma”). Though sad that their favorite teacher (Bahar Kerimoglu) is going to Istanbul, the girls enjoy the final day of their school year, engaging in horseplay with local boys in waist-deep water.

Their joyous exuberance is turned into something dirty, however, by a local gossip who accuses them of sexually touching themselves against the boys’ necks and, of course, it is the girls who must pay the price. As an innocent game becomes the catalyst for intimidation, the girls are taken one by one by grandma to check their virginity and are subject to beatings from their overbearing uncle. Anything potentially corrupting is taken away such as their cell phones and computers along with their makeup. Expressive, often skimpy outfits are substituted with ugly, shapeless, colorless dresses that destroy their vibrancy.

The restrictions become even more blatant after they sneak away to attend a soccer match, even though the crowd is all female (men have been refused entry after a riot). Though Erol didn’t see them at the game thanks to a relative who sabotages the electricity to the entire village, their act of rebellion is the last straw for the grandmother. The house becomes a prison as bars are put on the windows and a group of local women arrive to teach the girls cooking and housekeeping in preparation for their preordained role in life as wives and mothers. The situation is promptly described by the feisty Lale who asserts that their home has become a “wife factory,” and that their key function will be to produce children.

Even sadder, there are darker things going on which are not shown but are implied when we see Uncle Erol going into Nur’s room at night, after which the grandmother hides the sheets. Most likely aware of what’s going on but powerless to prevent it, she begins to arrange marriages for each one of them. Sonay rebels and insists that she will only marry her boyfriend Ekin (Enes Sürüm) which is agreed to. Selma, however, is not so fortunate. After her marriage to a boring partner, she is forced to undergo a gynecological examination when there’s no blood on the sheets, despite her repeated and truthful assertions that she is a virgin. While the forced marriage plan is partially successful, it leads to tragedy that we are totally unprepared for.

Anticipating that she may need to escape this prison before she is also ground down into the passive, compliant woman the family desires, Lale is secretly taught how to drive by Yasin (Burak Yigit, “Victoria”), a friendly neighborhood truck driver and her thoughts turn to other possibilities. Mustang is marked by outstanding performances by the five sisters who display an intimacy that breathes love and affection. Though the film deals with disturbing subject matter, it is not a depressing film. The remarkable performances by these outstanding young women and the connection they have with each other is exhilarating as is their willingness to assert their individuality and their humanity in the face of ignorance masked by good intentions. 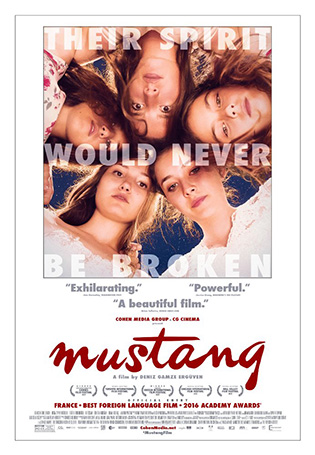