I like actors that have a knack for portraying characters with some whacked out attribute. Therefore, I like Steve Buscemi. This guy has been in 100+ movies, many of which, the parts he played had some serious issues (defects may be a better word). A few of my favorites are Mr. Pink from “Reservoir Dogs” and the zany homeless guy in “Big Daddy.” To say I was interested to see what he could dream up on his own (writing and directing) would be an understatement. Yeah, I know Interview wasn’t his first writing gig, but it is his first full release feature he’s done and the first I’ve gotten a chance to see.

On the surface Interview appears a bit clunky like your old man’s 1972 Ford Pinto. Steve Buscemi is Pierre Peders a political reporter who has seen better days. Due to a string of recent transgressions, he’s forced to walk the celebrity beat with those terrible Us Weekly and People magazine bozos. His first assignment — interview the super-hot actress Katya (Sienna Miller, “Casanova”). I had to ask myself: Did I really want to sit for an hour and a half to watch what basically amounts to an argumentative interview with a ditzy celebrity?

As you can expect, it doesn’t go very well. Pierre’s attitude sucks, as he firmly believes this line of work is beneath him. Add in the fact that Katya is over an hour late and there is a political scandal brewing in Washington and you can guess just how much worse his demeanor becomes. After three minutes of banter, it is clear he did absolutely no background work prior to their engagement and he clearly doesn’t give a shit about her. She leaves in an huff and he follows suit. Outside, he gets cracked on the head and the actress he just completely humiliated brings him to her apartment to clean up his cuts.

It’s here the movie comes together. Miller plays the role of the super sexy and manipulating vixen quite convincingly. She leads Pierre by his dick — kissing him, saying provocative things to him and enticing him with little tidbits she knows will rouse his inside reporter. She does this so well, I had to ask myself who was the seasoned veteran here? And as any poor man would do, he becomes Play-doh in her fingers. While he’s caught of-guard he spills his problems onto the carpet for her to take in and swallow whole. He’s got a fucked up brother, a job that no longer believes in him and messy home life. It’s awfully difficult to gain the upper hand in an interview after divulging that kind of information. But he continues to try and ultimately loses his bid for dominance. The twist at the end caught me off guard and was the perfect ending for the movie.

In light of the interesting drama, Interview does have a few itches that I couldn’t quite scratch. Through it all, on and off, the two characters bicker and fight like two old ladies. Pierre threatens to leave and doesn’t and other times Katya asks for him to leave and then recants. There are one too many instances where the individual should have clearly removed themselves from the situation. Even if you’re a reporter, you’ve got to know when a story isn’t worth the hassle (even if you’re transfixed by the subject). My biggest beef is with the length of the movie. While it is only 84 minutes long, it is actually 20 minutes longer than it should have been. There are quite a few lull points and some of the tit-for-tat scenes could have been skipped entirely.

All said, Interview was an unexpectedly entertaining movie. Buscemi shines once again as a guy with a shitload of problems. Miller, whom I know little about, carried herself like a professional. I’m not entirely sure if I’d go out of my way to sit and watch this again but it is definitely a movie that deserves a first look. 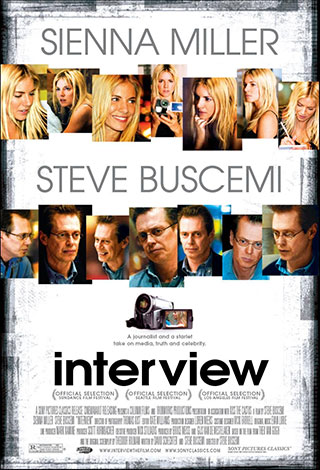