All These Small Moments is essentially real life on screen; at least how I imagine real life to be. We are privy to the small moments of a family’s life, the witness to the possible unfurling of a marriage and a young boy’s first venture into love — an ending in love in tandem with the beginning of another. As the movie begins, a regular viewer would be taken aback by the difference in pacing between a film like this and the usual theatrical drama. There are small moments of conflict, but these moments quickly dissipate or are suppressed, mimicking the restrained nature that is real life — where we want to make peace but don’t know how to, or when we argue with our mom about being too old to get ice cream after seeing the doctor, when it’s not really about that.

The actor Brendan Meyer (“The Guest”), who plays Howie, is really the star and heart of the movie. His plight is a relatable one, since I think all of us has at one point or another experienced unbridled longing for a complete stranger. In a moment of happenstance we set our eyes upon them, then suddenly they become all we can think about. We look forward to each moment, each glimpse, ardently hoping they would return a semblance of what we feel for them. Odessa (Jemima Kirke, “Untogether”), Howie’s source of affection, is a strikingly beautiful woman. That was my prevalent thought as I watched Howie watch her, with the film encouraging me to see her the way he does. The camera lingers on little details of her body, her manicured fingers, her tattoos. She looks incandescent as she is bathed in sunlight, her eyes lost in the view beyond the bus window, though there is a sense she isn’t really looking at what lies outside. It is akin to a kind of visual poetry, which has a nice parallel to the poetry Howie starts to write because he is so enamored with her.

While Howie experiences this burgeoning sense of love, we see a stark contrast for his parents. Their scenes become visually dull as their narrative is explored, with most of their interactions occurring at night or in dim, uninspiring spaces. It lacks the movement and brightness that inundates the Howie-Odessa arc. Things aren’t working out between Carla (Molly Ringwald, “Siberia”) and Tom (Brian d’Arcy James, “Molly’s Game”), because at some point they stopped trying. We do, however, glimpse what drew them to each other in the first place, the camera zooming in close to their faces, both of them taking turns to lament at the loss of what they used to be as a couple. Writer/director Melissa Miller Costanzo takes the strife further and shows how a potential separation between the two affects everyone. Even Howie’s brother (Sam McCarthy, “The Blacklist” TV series), who doesn’t seem too bothered by anything, cannot take the uncertainty of the situation. At all points, All These Small Moments just feels amazingly authentic, its focal point being our need to be desired and to feel desire. Odessa is drawn in by Howie’s desire for her, Carla and Tom attempt to rediscover their desire for each other, and Howie learns that sometimes desire should just remain an ideal.

It is hard to find any major faults with All These Small Moments, maybe because there isn’t any. It is such a reminder of the poetry and beauty in each small moment of our lives, and the hope that no matter how far we have traveled from ourselves, there is always a way back. Healing and recuperation is just as much of a reality as a broken hand, which is apt since Howie begins the movie with one. It is hard to believe that this is Melissa Miller Costanzo’s directorial debut — what magic she stirs, even in the tumultuous, it feels like “a worst fate to look away.” 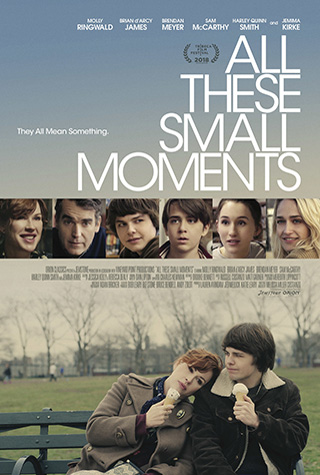