When it comes to creating horror, a key aspect is the surrounding environment. From Gothic castles to creepy houses to underground caverns to spaceships, if the characters are in a threatening environment the audience can feel unnerved. Thus, part of the work is done and you can develop further tension with set pieces and jump scares. One dangerous environment conveniently covers 70% of the Earth’s surface, and filmmakers have used the ocean to menacing effect for decades. Whether the threat is the sea itself (“The Perfect Storm,” “The Abyss”), enemy vessels (“Das Boot,” “Crimson Tide”) or oceanic predators (“Jaws,” “The Beast From 20,000 Fathoms”), the sea provides threats aplenty.

Sea Fever utilizes the menace of the sea and what lies beneath its surface to great effect. The opening underwater shots provide an eerie and unsettling visual and aural display before a human body splashes into it. There is an irony to this (very brief) sequence as it presents an unfamiliar environment and quickly disrupts the established normalcy with the sudden intrusion. Humans into water is always a disruption, and the surroundings of the human are instantly strange and threatening. From this arresting opening, writer-director Neasa Hardiman crafts an effective and immersive horror film that merges generic tropes with the understanding needed to meet and subvert audience expectations.

The film follows marine biology researcher Siobhán (Hermione Corfield, “Pride and Prejudice and Zombies”), who reluctantly undertakes essential field work abroad an Irish fishing vessel. Despite initially grating with the salty crew, she comes to bond with them and fits into the life of the boat. Then something unexpected happens and events become increasingly strange and frightening. This set-up of a small crew on an isolated vessel encountering an unknown creature almost inevitably leads to comparisons with “Alien.” The similarities include the number of crew (seven), the function of set pieces, the build-up to jump scares and the fate of the characters. A meal scene is interrupted with a strange ailment; one character insists on safety measures and gets struck for their trouble; invasion moves from the boat to the body. A comparison could also be made with another recent “Alien” homage, “Life,” but Sea Fever is far eerier and less flamboyant, relying on a dour but evocative color palette, subdued lighting and sometimes nerve-shredding suspense.

Sea Fever also innovates by playing with its genre conventions. Tropes such as the Final Girl, fake outs, kills and unreliable authority are all present, but familiarity need not breed contempt. The characters are a decent and well delineated bunch. Siobhán is a loner, devoted to lab work and numerical mapping, and actively avoids social interaction. Despite her youth, she is a woman of science who does not guess but studies behavior. Her social ineptitude as well as her bluntness and tendency to take things literally while also wanting things a certain way mark her clearly — but not clumsily — as the movie version of autistic. Visually, her brightly colored clothes and red hair contrast with the drab mise-en-scene of the boat. The fishing crew consist of young and helpful Johnny (Jack Hickey, “Mary Shelley”), the noticeably older-than-everyone-else Ciara (Olwen Fouéré, “Fantastic Beasts: The Crimes of Grindelwald”), grizzled captain Gerard (Dougray Scott, “My Week with Marilyn”), wise matriarch Freya (Connie Nielsen, “Wonder Woman”), skilled engineer Omid (Ardalan Esmaili, “The Girl, the Mother and the Demons”) and naïve young Sudi (Elie Bouakaze). This racially diverse crew for the most part avoids stereotypes, and they have a convincing (although contingent) attachment to the boat. Notably, the film displays confidence in intelligence — Siobhán and Omid are the smartest characters — but no one makes a stupid decision for the sake of plot mechanics. Consequently, we are treated to a relatable group of characters who find themselves (pun intended) out of their depth.

As they attempt to deal with the danger, Siobhán’s scientific method is applied even as tensions rise — the titular “sea fever” refers to psychosis brought on by the sleep deprivation caused by work at sea. In doing so, Siobhán embodies the voice of rationality which clashes with the crew’s superstition and faith. Initially the crew are unsettled because it is bad luck to have a redhead aboard, but she quickly has the smartest (though unpopular) ideas that the others come to accept. Rationality vs. belief is just one of the tensions that run throughout the film. Boat owners Gerard and Freya are suffering from economic troubles and this leads to reckless breaking of fishing regulations. Siobhán must negotiate the difference between lab work and the real world. Environmental concerns arise such as the impact of invaders and the crew must negotiate a fishing exclusion zone. These tensions are efficiently sketched as Hardiman’s tight filmmaking neatly incorporates such aspects as the parental grief of Gerard and Freya, Siobhán’s emotional breakdown that she tries to counter with her scientific textbook, and Omid’s family history. All the performances are strong, especially Corfield who imbues Siobhán with naivety as well as resourcefulness. Her precociousness and resourcefulness mean that to a large extent she carries the film, and the unshowy performances of her fellow actors help elevate her. Hopefully we will see more from this fine actor in the future.

Visually, cinematographer Ruairí O’Brien imbues the sea with a dark and powerful beauty, as well as creating evocative shadows in the interior of the boat. Eerie silence fills the pauses between Christoffer Franzén’s haunting score. Meanwhile, Ray Ball’s tactile production design is keenly invaded by a weird blue goo that foreshadows the much nastier invasions to come. All of these elements would make Sea Fever one to watch at any time, but the film’s release in 2020 gives it an unexpected relevance as an infection horror. Questions over how to test for infection, the necessity of quarantine, who decides whether people live or die, and taking responsibility for protecting others add an unintended, but nonetheless chilling, dimension to the film. Come the conclusion, viewers may find themselves reflecting on their own role in a time of contagion, and whom they should listen to. While it offers little in the way of originality, Sea Fever combines generic knowingness, well-drawn characters, effective atmosphere and real-world resonance to deliver a very enjoyable gothic/monster/infection horror. 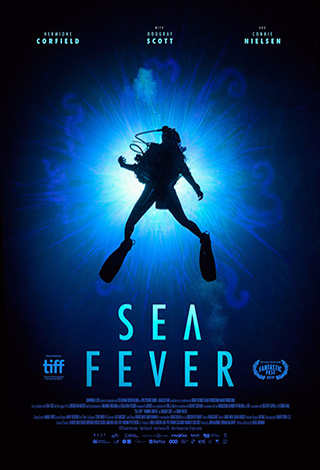