Once upon a time (in 2017), a movie was shown at the Toronto International Film Festival. Filled to the brim with stars like Richard Gere and Peter Dinklage, it promised to spin a cinematic tale based upon a famous psychiatric case study (The Three Christs of Ypsilanti by Milton Rokeach) that involved complex elements of both religion and the human mind. But for some reason, the film disappeared into the release schedule forest for many years. Was this just a sad bit of circumstances, or was there something deeper going on that no one wanted to admit? Could a movie directed by the guy who did the beloved “Fried Green Tomatoes” (Jon Avnet) and starring some of the greatest actors of the last 40 years, actually be considered “bad”? That’s an answer more interesting than how many licks it takes to get to the center of a Tootsie Pop.

The film, Three Christs, tells the story of one Dr. Stone (Gere, “Norman”), who discovers three paranoid schizophrenic patients that all believe to be Jesus Christ. First, there’s Joseph (Dinklage, “The Boss”), a devoted-opera lover who is the most genuine (yet ill-tempered) of the trio. Next up is Clyde (Bradley Whitford, “Phil”), the eldest, who suffered a significant loss and often feels he’s unclean. And then there’s Leon (Walton Goggins, “Ant-Man and the Wasp”), the most serious of the bunch, who uses his words to cut others down. By putting the three in the same space, Stone hopes that their discussions will bring something new to the psychology table. But the road to such discoveries may be well-intentioned, but certainly aren’t without dramatic bumps.

In the first opening shots, Three Christs comes off like the most vanilla of psychiatric dramas. Think “Awakenings” but with a TV movie of the week edge. There’s a legitimately crisp indie darling look (thanks to the cinematography talents of Denis Lenoir), but every other element on-screen reads as unpolished — especially the script. Avnet and screenwriter Eric Nazarian try their best to get a grasp on the material that is the cinematic definition of tricky. On the one hand, you have to stick to what authentically took place while simultaneously keeping the audience on their toes in the middle of a therapy session. But with confusing leaps of narrative fancy, overtly disgusting dialog (mostly coming from Leon’s mouth) to baffling exposition that tries to be “woke,” the script screams for a much more skilled storyteller to grab the narrative wheel.

Yet the worst issue this script suffers from is the use of individual vital players. Take, for example, the research assistant, Becky Anderson. It is known that in real life, Ms. Anderson was involved in Rokeach’s study (mostly in helping with Leon’s case). Still, her film counterpart (Charlotte Hope, “The Nun”) seems to exist purely to be dangled in front of both Dr. Stone and Leon as a carrot of sorts, or a doggie treat — whichever phrase makes you comprehend the uncomfortable nature of her development within the plot. One particular sequence, in which Becky decides to try some mind-altering drugs, sees her hallucinating flirtations towards Stone, as his wife awkwardly comes to visit him in the office. Is she there to prove some inner flaw of Stone’s? Or is she an actual well thought out female character? Avnet and Nazarian have no clue.

But perhaps the most egregious of these choices come in the form of Dr. Stone’s arc. From the beginning, this script desperately wants us to believe that Stone is a wacky, free-thinking rebel (in that late-50’s sort of way.) He supports the likes of Lenny Bruce, has “crazy” sex with his equally attractive and intellectual wife (Julianna Margulies, “The Upside”), dabbles in LSD, and (of course) isn’t down with the G.O.D. But by the end of the movie, Stone transforms into a walking Hallmark movie lesson — the kind that will make you simultaneously want a barf bag and a box of tissues.

Stone is the representation of Rokeach himself, but there’s no real knowledge as to whether Stone mirrors his real-life counterparts’ behavior to a “T” — coming across more like a superhero adaptation of a person who had god-like delusions. History would eventually tell us that Rokeach learned from the problematic elements of his behavior towards his patients. Still, Stone’s much mushier conclusion makes it seem he didn’t have the same hurdle to overcome — resulting in his journey coming off more Hollywood than Rokeach’s story ever was.

The same can be said of the performances for everyone in the cast, which range from the typical Tinseltown examples of sleepwalking to the purest cases of try-hard. Richard Gere plays Stone like every other role he’s ever done in a courtroom drama, seeming as if he’s probably yawning after each take. The three Christs themselves each make their own “interesting” choices, with Dinklage (obviously) coming across as the best of them. Goggins tries his best at making Leon come across as charismatic (despite the disgusting dialog he has to utter), and Whitford is doing his best audition for an SNL sketch.

In fact, such a description nails the majority of Three Christs problems — everything here is too silly, too over the top, and far too dated. If there ever were a time to reach through the bag of magic that the internet has to offer, this would be the moment to select the always perfect “What Year is it!?” meme. Because if any film seems like it (unfortunately) time traveled from the same year of “Patch Adams” release, Three Christs would be it. Both creations take a true part of history and replicate it in a fashion that is seeking the mush rather than the truth, embraces the quirky as opposed to the factual, and comes across as pure sloppy filmmaking. Thankfully, at least one of them has Robin Williams in it. 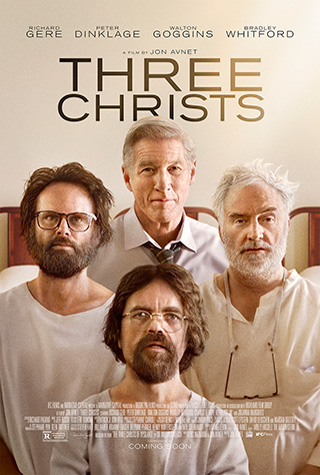