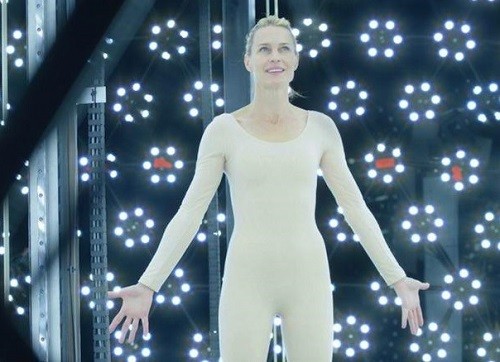 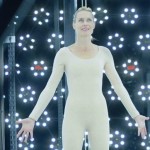 Part live-action and part animation, Israeli director Ari Folman’s The Congress presents a sharp picture of the Hollywood of the future in which flesh and blood actors have been replaced by computer images, scanned to capture them at the most productive point of their career (technology that Folman discovered already exists). Loosely based on Stanislaw Lem’s 1971 novel, The Futurological Congress, the focus is on the idea that the entertainment industry has a hold on people’s minds, turning them from rational, concerned, and involved human beings not narcotized slaves of pop culture.

Robin Wright plays herself as a 44-year old actress whose career is in a downward slide. She lives in a converted airplane hangar in the California desert with her two children, Sarah (Sami Gayle), a bright and articulate teenager, and her younger boy Aaron (Kodi Smit-McPhee) who suffers from a rare illness that is causing him to slowly become blind and deaf. When Robin receives an offer from her agent Al (Harvey Keitel) to allow the Miramount Studios to scan her image, emotions, voice, and delivery into their database to create new performances in whatever genre they choose, all she has to do is agree not to do any more acting — anywhere, not even in her backyard.

Trying to persuade Robin to sign the 20-year contract, studio boss Jeff Green (Danny Huston) berates the bad choices in roles and men that she has made over the years and all the money she has cost the studio with her erratic behavior. What he is really saying is that growing old is out-of-place in a corporate culture dedicated to churning out youthful box office celebrities. Even her agent urges the beleaguered actress to sign the contract even though she is resistant, telling her that being scanned is better than having to undergo multiple face lifts. In one of the most powerful scenes in the film, as Robin, who has reluctantly agreed to be scanned, stands in a metallic geodesic dome, Keitel, a master storyteller, tells her about how he became an agent as a boy by exploiting other children, a story designed to elicit a variety of emotions in the subject being scanned.

Fast forward twenty years, Robin is seen speeding down the highway in a Porsche convertible following a brightly-colored rainbow, surrounded by a neon ocean with cartoon ships and whales. It is clear that we are not in Kansas anymore. As The Congress shifts into animation mode, to renew her contract, Robin morphs into a white-haired animated character attending the “Futurological Congress” at the Abrahama Hotel owned by Miramount-Nagasaki. Simply by ingesting a drug, all of the attendees have assumed the persona of their choice. Among those spotted are Michael Jackson, Marilyn Monroe, John Wayne, Clint Eastwood, and even political figures like Osama Bin Laden and Che Guevara — all animated of course. Why these particular people would still have any appeal after twenty years has passed is not clear. 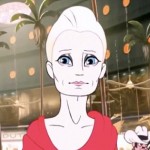 Now the star of a science fiction series called Rebel Robot Robin, Robin is asked to address the gathering in the “Great Hall,” ostensibly modeled after plans drawn up by Nazi Defense Minister Albert Speer. Here, everyone is under the influence of hallucinogens to create their own fantasy world (a false notion that hallucinogenic drugs are a substitute for reality, rather than a window into a greater reality). After new advancements are announced such the ability to “drink” your favorite celebrities — presumably non-alcoholic — Robin tells everyone to “wake up” before they lose their humanity, a message that does not go over well with the Miramount moguls and leads to a seemingly endless stream of consequences.

The Congress begins as a well-meaning and adventurous attempt to say something relevant about the current state of pop culture, but the film’s theme of the effects of ageism in Hollywood becomes muddied by a convoluted plot that dissipates the energy the film has carefully built. With the introduction of subplots that go nowhere including a romantic involvement with Dylan (Jon Hamm), the technician who worked on her films, and Robin’s search for her now adult children in the “real” world, the film strains for credulity. Ultimately, despite all the skewed attempts at profundity, what remains with us is simply what has always been there, yes, even before the advent of technology — the connection of two lonely people for each other and the unconditional love of a mother for her son. 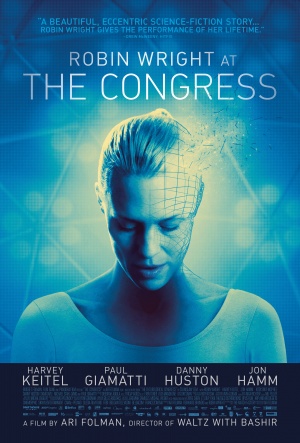