Filmed in stop-motion animation, Duke Johnson and Charlie Kaufman’s (“Synecdoche, New York”) Anomalisa is a look at loneliness and its psychological effects. Filled with existential despair, it is also funny, surreal, and thought-provoking, a film that can touch you in ways you never thought possible. Nominated for Best Animated film at the 2016 Oscars and Golden Globes, it’s subject is one Michael Stone (voice of David Thewlis, “The Theory of Everything”), a middle-aged, disheveled-looking author and customer service advocate, who has come to Cincinnati from Los Angeles to deliver a talk at a conference on the subject “How May I Help You Help Them?”

We follow Michael as he arrives at the airport and takes a cab to the Hotel Fregoli (named after a paranoid psychological condition). Michael’s world is a projection of what he has become, a slightly paranoid depressed man skimming along on the surface of life. We soon notice that everyone talks in the same voice whether male or female (the voice of Tom Noonan, “The House of the Devil”). Each “person” has the same facial characteristics, the same low energy, an effect of blandness and a robotic presence. During the ride to the hotel, Michael does his best to avoid conversing with the asthmatic cabdriver who attempts to make small talk about the weather and gives him suggestions about how wonderful the chili is in Cincinnati and that he must visit the zoo, two recommendations that seem to be of little interest to him.

After checking into the hotel, he mechanically tips the bellhop, orders room service (which he never appears to eat) and goes through the motions of calling his wife and his son whom he calls “Slugger,” but there seems to be little emotional connection. Slugger wants a toy so dad picks up the first thing he sees in a sex toy shop, a supposedly rare model of a naked Japanese Geisha that is guaranteed to not be Sluggers’ favorite toy. Out of loneliness, Michael calls Bella, the woman he deserted eleven years ago and they meet at the hotel for a drink but his inability to listen to her feelings and his fast move to invite her to his room swiftly ends the reunion.

Now unhinged by his fears, he desperately begins knocking on doors in the hotel hallway and soon meets Emily and Lisa, two fans who came in from Akron to attend his lecture. Though Emily is the more attractive and more available of the two women, Michael fixates on Lisa and, after a few drinks, invites her back to his room. It is immediately noticeable that Lisa (the voice of Jennifer Jason Leigh, “The Hateful Eight”) is not like the others. Her voice is the only one with any individuality. Lacking self-esteem, her continual put-downs of her looks and her intelligence is heartbreaking but nothing can deter Michael from his purpose. In his world of static uniformity, Lisa is an anomaly, a word he expands to refer to her as his “anomalisa,” which she loves.

Soon their experience of connection extends to a sensitively-handled sexual encounter, her singing the Cindy Lauper song “Girls Just Want to Have Fun,” and his offer to leave his wife and have Lisa move back to L.A. with him. Before he wakes up in the morning, however, his delusions express themselves in a dream in which the hotel manager summons him to the office in the hotel basement and tells him that he must stay away from Lisa, reinforced by everyone else he meets. As he eats breakfast and rehearses his speech, his attitude towards Lisa changes as if he realized his mistake of getting too close to another person.

Although Michael has delivered the same speech hundreds of times, at the conference the words seem to have lost their meaning and the audience sits silently as the speaker loses his grip on reality, talking about his unhappy life before remembering to tell people to always smile at the customer. In the speech, Michael asks the questions: What does it mean to be human? What does it mean to ache? (The second question seemingly answering the first).

For Michael, there is no one out there. It is all him in various aspects of his personality, a three-dimensional projection of his state of mind. It is only when he can look outside of himself and connect with another human being who aches as much as he does, that he can suspend his mechanical thinking and act in the moment out of the experience of who he really is, a moment that may be artificial, but whose substance is true and real and also unforgettable. 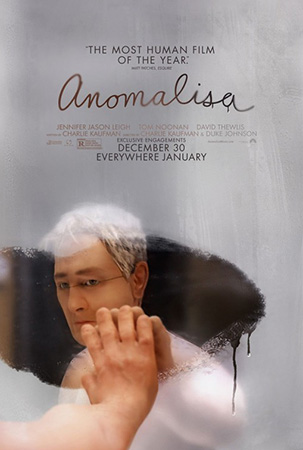