Francis Annan’s Escape from Pretoria describes the real-life adventures of political captives Tim Jenkin and Steven Lee as they attempt to leave the titular prison before their sentences are up. Set in the apartheid era of South Africa, the film spends most of its run-time within the walls of the prison itself, leaning on a fairly tight plot and strong performances by Daniel Radcliffe, Daniel Webber, and Mark Leonard Winter.

Jenkin (Radcliffe, “Imperium”) and Lee (Webber, “The Dirt”) were part of the African National Congress (ANC), which was itself illegal under the pro-apartheid government in South Africa. The ANC — you may recognize its then-president, a Nelson Mandela — worked to rid the country of the systemic racism inherent in apartheid, but it was slow going. In 1978, Jenkin and Lee planted leaflet bombs — explosives that, when set off, would shoot leaflets into the air — in Johannesburg, South Africa. In the movie, the duo is captured after setting off a series of these bombs downtown and then, after a trial in which Lee is sentenced to eight years in prison and Jenkin gets 12, they’re sent to Pretoria Local Prison, home to several other political prisoners.

Immediately, Jenkin and Lee try to find a way out of their new harsh environment. They make friends with the doyen of the political prisoners, Denis Goldberg (Ian Hart, “Mary Queen of Scots”), who agrees to lend assistance when possible. But this ain’t no ordinary lockup. In addition to the cell doors, there are multiple doors between the prisoners and eventual freedom. And then, beyond the last door, there’s still the issue of the ever-present snipers, including one sharpshooter who had been banished to the prison after engaging in excessive force at his previous police job. Kind of a daunting task, but Jenkin and pals have nothing but time to figure out a plan.

In the movie, both Jenkin and fellow prisoner Leonard Fontaine (Winter, “The Dressmaker”) are quick tempered and highly intelligent, which makes for some clashing of style, and Lee is relegated to acting as a mediator between the two. But, for all intents and purposes, this is Jenkin’s movie, and he hits upon an ingenious plan to get past each of the obstacles lying in their paths. At the same time, the prisoners need to deal with a vicious guard (played very effectively by Nathan Page, “Sleeping Beauty”) who seems to delight in tormenting his anti-apartheid charges). (Not surprisingly, the guards and warden are all portrayed as racist, incompetent, or some measure of both). The warden, by the way, is so inconsequential to the movie that he’s not even given a name in the credits, and if he had one in the movie it was mumbled as an aside. But he does take quite an interest in Jenkin — he just plain knows something is up! — although that interest doesn’t really amount to much.

There’s your basic gist: Prisoners plot escape. Since it’s based on a true story, the odds are not great that the prisoners do not, in fact, escape. But the thrust of Escape from Pretoria isn’t the destination, it’s the journey. How will Jenkin and company solve the riddle of the locked doors? How will they get past the snipers? After watching, however, I believe a little too much time was spent on planning, planning, and planning the escape. Although it was entertaining to witness the dynamic of Jenkin, Lee, and Fontaine prepare, the movie would have been served better had additional conflicts been set up more fully. Maybe the relationship between the guards and the prisoners could have been explored and exploited a bit more. Maybe one of the prisoners could have been caught trying to escape and then tossed into solitary — and, since this is a brutal apartheid regime we’re talking about here, the prisoner would then be mentally and physically browbeaten. Maybe there could have been more involvement from the other prisoners, for that matter. Goldberg and the others seem to exist to tell Jenkin that his plan stinks and not offer any alternatives. This is an additional shame, because Goldberg (as played by Hart) seemed like he could have been a very fascinating character.

Nonetheless, Escape from Pretoria is a fine film. It’s what they call good escapist fare, the kind you don’t really want to think too much about, the kind that has good intentions, but paints most of its characters as righteously good or demonically terrible. It does feature some game, solid performances by Daniel Radcliffe and Ian Hart, and it’s worthwhile if you want to while away the night watching a prison-break movie. 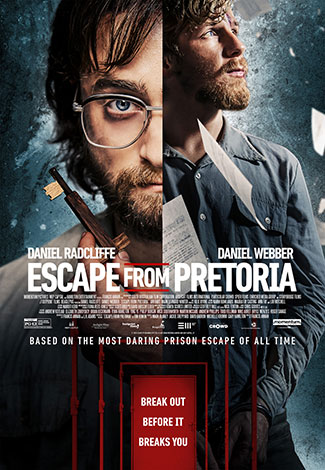