What we find scary will vary enormously. For some it’s the supernatural, for others the psychological. We may be revolted by physical suffering or horrified by social oppression. The Owners is a film that capitalizes on multiple registers of fear to create an unsettling space, both within the framework of the film and more widely, from its opening titles that recall “The Omen” to its haunting conclusion that lingers long after the credits have rolled (backwards, as another unsettling device). As a result, The Owners is scary and scarily good. Beginning as one type of horror, it then mutates into another. Yet the fear, discomfort and dread are maintained throughout, thanks to the tight direction of Julius Berg, the careful and incremental release of information in the script by Berg and Mathieu Gompel, and some committed performances, all of which combine to create an unsettling space.

Space is vital in this film, as we begin with exteriors then move inside for the majority of the action. The exteriors introduce us to four of the ensemble cast, the sound of birdsong and the charming English countryside juxtaposed with three youths getting high in a car. With brisk efficiency, we understand that Nathan (Ian Kenny, “Sing Street”), Terry (Andrew Ellis, “Teen Spirit”) and Gaz (Jake Curran, “Stardust”) are an established group of friends and also partners in crime. Efficient writing lets us know that Nathan is the leader by force by personality (up to a point), Terry is the weak follower who largely does as he’s told, and Gaz is the wild card. His unpredictability is emphasized by the arrival of Mary (Maisie Williams, “The New Mutants”), our ostensible heroine and Terry’s girlfriend, immediately suspicious of the unfamiliar Gaz. These four quickly take on the stereotypical roles of a home invasion group, their character traits becoming more overt as we see them in the house. Once inside, the space becomes increasingly threatening, but the source of the threat is fluid.

Uncharitably, our four home invaders could be thought of as chavs — working class young people with little in the way of prospects who resort to drugs and crime. Their encounter with the comfortably middle-class Doctor Richard (Sylvester McCoy, “The Hobbit: The Battle of the Five Armies”) and Mrs. Ellen Huggins (Rita Tushingham, “My Name Is Lenny”) highlights a class dynamic that becomes more apparent as the film progresses. Initially, the Huggins seem a bit strange and kooky, before their behavior becomes increasingly disturbing. Much like Mary, the audience may wonder what the hell is going on?

As our uncertainty increases, so does the menace of the film escalate, and this escalation is key to the film’s horror. Property is trashed; characters reveal their damaged histories and past sorrows; when violence occurs, it is unvarnished brutal and shocking; there are moments of outright depravity. Bobbie Cousins’ production design emphasizes durability, as the wood paneling of the Huggins’ home as well as the concrete walls of a basement and garage are used to convey comfort and entrapment, though not as might be expected. The charm of an unassuming country doctor (played by the typically unthreatening McCoy, familiar to some from TV’s “Doctor Who”) is distorted by a sinister medical smock and goggles, while recordings of a children’s program on an old tube TV and VCR become increasingly creepy, expressing an underlying sense of inertia and being trapped in the past.

Berg cuts swiftly between faces during scenes of threatened and actual violence, including some graphic use of power tools, and also utilizes long takes that further express confinement, roving around the space before returning to our starting point. These protracted shots capture escalating events, the combined effect of the filmmaking emphasizing that there is no escape. Drugged characters lead to visually inflected shots of distorted vision, and entrapment of women both physically and psychologically expresses malevolent patriarchy. At one point, even the aspect ratio constricts, the ultimate expression of entrapment as we are literally seeing less, our attention focused on a smaller space while the larger threat remains out of sight but very much in mind.

As is often the case with a really effective horror movie, the subtext is as interesting as the text. The simplest way to describe The Owners is that it shifts from home invasion to folk horror, progressing from “Panic Room” to “Get Out,” with elements of “You’re Next” and “Eden Lake” along the way. It is, consistently, a tale of class warfare. The lower class are motivated by the chance to escape their socio-economic designation, which develops into a form of revenge. Meanwhile, the middle class are threatened, then become condescending and threatening in their own right. Concerns of class immobility are made literal, including paralyzing drugs, damaged spines as well as locked rooms and chains, building to a shattering climax.

Overall, The Owners is a precise, tight, nerve-shredding film that takes a simple premise, a few characters and one location to tell an effective story with multiple meanings. It is well worth checking out, but be prepared to curl into a fetal position afterward. And if you ever thought robbing a country doctor would be a simple way to get money, think again . . . 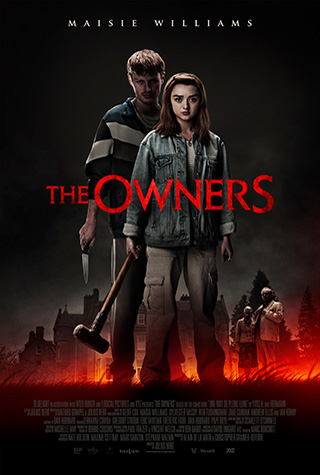