Some of you may or no may not remember, many moons ago MTV had a show called “Liquid Television” which was a show that gave air-time to independent animators. “Aeon Flux” was one of the more notable entries (as was “Beavis and Butthead”).

So I decided to give the big screen adaption a shot, as from what I can remember, “Aeon Flux” was a strange, quirky, sci-fi adventure and Charlize Theron is always a pleasure to look at. Which leads us to my review . . .

Aeon Flux is a complete and utter waste of time. I had absolutely no fucking idea what was going on (and later I didn’t want to know). The plot sucked. The action sequences sucked more. Charlize Theron in spandex, dare I say, sucked even more. There was simply nothing, and I mean nothing good about this movie. Nada.

My wife and I both looked at each other at the end of the movie and laughed. We couldn’t believe we actually sat through this 90 minute movie without gouging our eyes out. It’s simple, avoid Aeon Flux at all costs. In the similar vein of “Judge Dredd” (where the movie simply destroyed the franchise), do yourself a favor and get your hands on the original concept material. You’ll be so much happier that you did.

Movie Review: The Chronicles of Narnia: The Lion, the Witch and the Wardrobe (2005)
Movie Review: Harry Potter and the Goblet of Fire (2005) 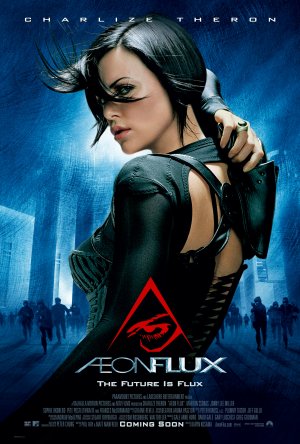