The Von Trapp family singing their way across the Alps from Austria to Switzerland in “The Sound of Music” is an iconic image in cinema history. While it has its devoted fans, “The Sound of Music” also attracts criticism for its sugar-coating of one of the darkest chapters in human history. A more somber tale of defiance against the Nazis that includes artistic performance is Jonathan Jakubowicz’s Resistance. Jakubowicz’s film tells the story of Marcel Marceau (Jesse Eisenberg, “Vivarium”), who in World War II hid and transported Jewish children as part of the Boy Scouts and the French Resistance, before becoming a world-famous mime after the War.

The Holocaust is prime material for powerful filmmaking, and such giants as “Shoah,” “Schindler’s List” and “The Pianist” cast a long shadow. Within this shadow, Jakubowicz crafts a tale that is very much his own while still echoing films that have come before. Jakubowicz’s great skill is juxtaposition, as we begin with a calm bedtime story for the young Elsbeth (Bella Ramsey, “Holmes & Watson”). Despite the homely setting, the super text of Munich, Germany, 1938 lets the viewer know what is coming. A swift Nazi attack is the first of many sudden jumps from tranquility to violence, and the film continues in this vein as we flash forward to Nuremberg in 1945. General Patton (Ed Harris, “mother!”) delivers a stirring speech about courage to American troops, and then promises to tell them a story. For this story, we flash back to Strasbourg, France in 1938, where we first meet Marcel.

Marcel’s mime act — though he describes himself as a “serious actor” — of a Charlie Chaplin impression performed in a cabaret echoes Chaplin’s own work “The Great Dictator” as well as Bob Fosse’s “Cabaret.” Later the film recalls the whimsy of “Life Is Beautiful” as well as “Jojo Rabbit,” before being interrupted with the brutality of more war-inflected dramas like “Anthropoid.” Multiple factors constitute the character of Marcel, who not only imitates Chaplin but quotes Freud and paints. He is witty and charming, amusing with his “clowning,” the role proving to be a showcase for Eisenberg’s physical comedy skills. There is a misguided belief that clowning and comedy are somehow easy, but Eisenberg/Marcel demonstrates that to be funny requires intelligence, knowledge and discipline. As the film progresses, Marcel engages with others through his performances, at first for entertainment and then for other purposes. Marcel engagement with others is often expressed by Jakubowicz and cinematographer M.I. Litten-Menz through 360-degree panning shots that express changing circumstances. Rather than recalling the work of Michael Bay or Joss Whedon, a closer cinematic cousin to this visual device might be Fernando Meirelles’ “City of God,” as an early pan around Marcel surrounded by children expresses his widening perception of their situation. Another such shot captures Marcel and the children in a well, playing a game that highlights Marcel’s move from clowning and dumb show to in-depth role-playing. Another in Nazi-occupied Lyon shows the increased danger as German troops stand on every street corner and civilians are rounded up indiscriminately.

The film’s visual development matches the development of Marcel. A mime enactment of his is cut to classical music, making his performance a deft dance between horror and humor. As the German forces advance and Marcel and his fellow Scout leaders Emma (Clémence Poésy, “Harry Potter and the Deathly Hallows: Part 2”), Georges (Géza Röhrig, “Son of Saul”) and Alain (Félix Moati, “Simon & Theodore”) lead their charges south, the lighting of the film moves from the daylight of an open chateau to surreptitious movements at night and below ground, lit by torches, lanterns and candles. This transition is heralded (literally) by Marcel silhouetted in a tunnel blowing a horn to summon the children, who are framed behind him. His placement signifies the move from light into shadow in a beautifully haunting image. When Marcel decides to join the French Resistance, the discussion with his brother Alain is lit by a lantern, the sharp contrast between light and shadow highlighting the grimmer turn of events.

When it wants to be grim, Resistance features intense action scenes captured in fast moving tracking shots, as well as tense set pieces where varying depths of field express the tiny distance between safety and danger and a smart set design provides sharp contrast between urban and rural environments. There are sudden outbursts of violence such as raids and a deeply uncomfortable torture sequence, the film’s quick changes expressing the constant and unremitting danger faced by the Resistance. A particular instance of this is the juxtaposition between an empty swimming pool and an opulent hotel lobby, which turn out to be in the same building.

The brutality in the film does lead to its main flaw, as Jakubowicz is sometimes heavy handed. At the beginning, end and also during the film, supertext informs the audience what is happening when the images do that adequately. There is also a literal and metaphorical leap of faith, which would be more annoying if it was not part of a tense set piece. The film is not subtle about its contemporary commentary, sometimes laboring the dialogue with lines like “Populists talk so that idiots can rage with euphoria and feel better about their miserable lives” and mention of the Allies putting a “cap on refugees.” While this reliance on dialogue to make a point contradicts the dictum of “show don’t tell,” it is nonetheless important to note that the political landscape in 1938 Germany has deep relevance for many countries in 2020.

Another dialogue problem is the spoken English, as the principal characters speak English with French accents, while the German dialogue is in subtitled German, including footage of Hitler. Speaking of Germans, a standout caricature is the film’s chief antagonist, SS officer Klaus Barbie (Matthias Schweighöfer, “The Command”). Introduced in a raid on a homosexual club in Berlin, Barbie is clearly VERY EVIL due to his viciousness and superiority over any non-Aryan, beating suspects to death and executing prisoners while playing the piano. He is something of a stereotype, able to murder and torture, but also a family man who wants his daughter to develop an interest in the arts. However, this persistent interest in the arts both across the heroes and villains of the film leads to perhaps its most interesting aspect.

Resistance can be read as a commentary on art and artists’ engagement with socio-political events. When asked why he performs, Marcel responds that he has no choice, which presents him as a solipsistic artist. Yet the film charts his increasing engagement with others and the type of resistance that he delivers. While Marcel and his friends encounter violence throughout, violence is never accepted as the appropriate response. The film’s title refers both to the organization and the practice itself: Take revenge or survive? Marcel’s art aids survival, not in a trite way of giving hope but in terms of practical survival techniques. Art has always been intertwined with politics, and even when artists deny political dimensions, audiences read them into the work. “Rambo: Last Blood” and “Terminator: Dark Fate” are read in relation to debates over immigration, Marcel’s inspiration Chaplin famously satirized Hitler, and Resistance itself, as noted, works as a commentary on contemporary politics in various countries.

Crucially, however, Resistance is not a triumphalist story. Despite being a film about genuine heroes, grand gestures are not the order of the day, rather everyday events and quiet or even silent acts of courage. This is perhaps why Barbie feels out of place because he is too overtly sadistic, whereas the true evil here is the impersonal war machine. If Nazism is a shorthand for mechanized state-based evil, then the tiniest act of compassion, performed by ordinary individuals, can be the most significant act in the world. The performance that closes the film focuses our attention on silent gestures, gestures that carry their own power of resistance. 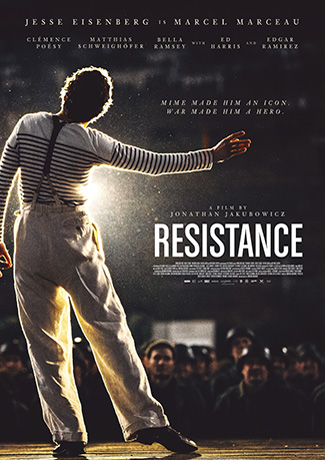