Often considered a forgotten genius, Nikola Tesla had a fascinating early life and upbringing, albeit not as impressive as his life and work in developing applications that could and would create devices that would transform electricity for practical uses. Tesla wasn’t simply an inventor (which would have been more than enough), but a visionary, a mystic, and an amateur theologian and philosopher. Teslafy Me attempts to incorporate the manifold aspects of the man’s life in a short documentary. However, whether it does so successfully requires some background into the man himself. A polymath with a photographic memory and a cosmic view of life (think of a scientific William Blake), Tesla patented at least 275 devices — most designed to enhance, even revolutionize technology. His first major contribution was the AC induction motor that he developed in the late 19th century, which has been hailed by many as one of the greatest discoveries of all time. Tesla could have been a very wealthy man, and his name should probably be spoken of in the company Nobel Prize winners such as Einstein and Marconi (the latter having “borrowed” Tesla’s research).

Instead, Tesla had been largely forgotten in public discourse, and it took a half-century for his name and accomplishments to make a “comeback,” most likely because of Elon Musk and his electric car. Most inventors could have lived the life of Riley after patenting inventions to make alternating current practical, or harnessing Niagara Falls so it would become a hydroelectric miracle, providing energy to a swath of upstate New York. But for Tesla, these two early successes soon entered his “been there, done that” list. After his initial successes, he’d explain to any investor who’d listen how — with sufficient funding — he could create a “wireless” communication system, and in his journals, laid out a framework that would theoretically provide everyone on Earth with a personal means of near-instantaneous communication. Tesla imagined the technology behind your cell phone a century ago. Besides successfully inventing new technological devices, Tesla envisioned a Utopian future, and compiled notebooks filled with ruminations on his philosophical and spiritual world view he considered a blue print for the future. In fact, his practical work and Utopian vision were interleaved. His writings outline a version of a world that makes the “Green New Deal” seem like a high school science project.

Given the breadth of Tesla’s accomplishments, the main question to pose regarding Teslafy Me, an 80-minute documentary film, written and directed by Slovenian filmmaker Janja Glogovac (“L… Like Love”) with support from the Tesla Science Foundation, and distributed by Vision Films, is whether it does justice to the man’s life and work.

The film makes a valiant attempt, delving into Tesla’s early life: Growing up in Croatia in a Serbian family that included his father, an Eastern Orthodox priest and a mother who was a self-taught amateur inventor. The film includes Tesla’s complex relationships with business partners and underwriters like Thomas Edison, J. Pierpont Morgan, and George Westinghouse, and, how this idealistic thinker and lover of pure knowledge, would become exploited by the shark tank of American capitalism. Even as an introduction to Tesla’s world, Teslafy Me has a hard time. There’s just too much “there there.” Maybe a multi-episodic Ken Burns-styled treatment would be a better artistic choice, but that still would have its limits. What would do greater justice to convey Tesla’s world would be a massive art installation with multiple screens, ambient sound and light, holographs, and maybe some Universal Studio time travel simulations. On the upside, the documentary has come along as renewable energy sources are being taken seriously, so it’s an excellent time to whet the appetite of viewers to delve deeper into Tesla’s contributions.

The most interesting parts of the film are the interviews with scientists, engineers, and artists that “feel” Tesla’s magic. The film features discussions with, among others, William H. Terbo (a NASA Engineer and Tesla’s great-nephew), Branko Terzic (Senior Fellow, Global Energy Center), Leonardo DiCaprio (actor, environmentalist), Marina Abramovic (artist, writer, filmmaker) and Gramatik (composer, DJ). Teslafly Me is interspersed with special effects in an attempt to create metaphors of Tesla’s inner and outer worlds. MAYDAY VFX provides the visual effects, while there is an original sound score by Kevin White. However, many of these high-end special effects seem more appropriate for a multi-media presentation at a Silicon Valley investor’s meeting.

It just might be that Nicola Tesla’s universe is too expansive to communicate in a documentary. However, if Teslafy Me helps to promulgate the greatness of its subject, that will be an impressive accomplishment. 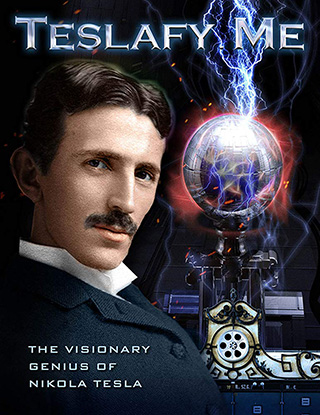