The horror genre relies, to an extent, on the utilization of familiar tropes. The use of these tropes can reward and subvert expectations, and how these tropes are used contributes to the film’s effectiveness. Audience familiarity is both an opportunity and a difficulty for filmmakers: Give the audience what they want and they welcome it, but provide too much and familiarity starts to breed contempt. Striking this balance tends to separate the memorable from the forgettable, and Blumhouse Productions has contributed several films of the memorable variety. The Hunt, sadly, is likely to be forgotten as quickly as the things you scroll past on Twitter.

The Hunt is a knowing film that utilizes common tropes of the horror genre. A common starting trope is a disparate group of characters. These characters might be attractive teens as in the case of most slashers from “Halloween” to “Scream,” but this is not essential. Varied groups are trapped in siege horrors like “Night of the Living Dead” and “The Mist,” or in haunted house environments from “The Haunting” to “Alien.” The location leads to another key trope: Uncanny surroundings, the threat of a space that is both familiar and unfamiliar. A motel in “Psycho,” ships in “Thirteen Ghosts” and “Deep Rising,” family homes in “The Exorcist,” “You’re Next” and “Color Out Of Space” all begin as safe places but quickly devolve into sites of menace. Within these sites, disparate groups of characters encounter threats and often their own prejudices, as horror frequently performs social commentary and critique. The aforementioned examples engage with issues of race, religion, class and gender, sometimes highlighting social discourse and performing outright satire. And then there is the actual horror, from jump scares where something bursts out, as well as inventive and gruesome deaths, such as “The Omen” and “Final Destination” franchises.

The Hunt features all of these tropes to differing effects. Two disparate groups make up the principal characters. The members of the first group are introduced in a text message group chat — fairly mundane. The second is decidedly unusual: Various characters wake up in a forest clearing with bits padlocked around their heads. They quickly find a crate filled with weapons, making the scenario even more unusual, before the shooting starts. The archetypes are familiar: Pretty young woman, handsome young man, older man with “Airborne Squadron” cap, yuppie type, cranky older woman, loner who displays survival skills. There are some minor surprises amongst this group, but for the most part they are little more than the descriptions above. When the members of the group chat actually come on screen, The Hunt quickly establishes that they are ostensibly liberal but ultimately arrogant and self-righteous, which leads to the film’s attempted satire.

Broadly speaking, the two groups in the film are the 1% and the rest, capitalizing on the current debates about the wealth gap in American society. The familiarity of the debate is enhanced by the environment: Woods and roads, plus a gas station, all suggest a location that is at least linked to the familiar, only for it to turn out not to be. Thus the familiar trope of the uncanny, the familiar and unfamiliar together, takes shape. The 1% group are distant from anything outside their rarefied milieu of private jets, caviar and champagne. The “rest of us” group includes stereotypical “rednecks” with strong southern US accents, and some terribly attractive middle-class types. While this set-up does offer opportunities for insightful satire, there is little exploration of the class divide. The various archetypes are dumped on screen much as the victims are dumped in the forest. Some of them are swiftly dispatched (the viewer may struggle to remember how many we begin with and therefore how many are left), and the principal characters emerge from their respective groups with little fanfare or suspense. Thus character, location and social reflection are all used functionally, but with little imagination or impact.

This leaves the matter of the various deaths. Of the film’s elements, the deaths are the most effective, because the film has fun with its kills. Bullets punch through heads unexpectedly, a pit provides a repeated gag, landmines and grenades add to the carnage, arrows prompt one of the funnier lines (“What is this ‘Avatar’ shit?”), and shotguns deliver close range gore. The initial bout of blood outs recalls the Cornucopia sequence in “The Hunger Games,” which is interesting because although gorier The Hunt lacks the disturbing context and impact of that series. This is largely a matter of tone, as director Craig Zobel seems intent on giving the audience a fun time. A later set piece at the aforementioned gas station exchanges the exposed forest clearing for a confined space of blood spatter and some crunchy interactions, although by this point the film is losing steam. A set piece in a bunker is another matter of gunshots interspersed with unarmed combat, and despite some wince-inducing moments there is little inventiveness here.

Overall, the kills are enjoyable and some are laugh out loud funny, but at no point does The Hunt feel actually scary or even suspenseful. The best scene of the film is the first massacre, because this section is genuinely creative and committed to its gore. After that, Nick Cuse and Damon Lindelof’s script feels increasingly clumsy as social commentary spills from the mouths of the characters IN CASE THE AUDIENCE WERE NOT GETTING THE SATIRE. References to refugees, climate change, social media, politically correct terminology and “Animal Farm” feel forced, making the satire blunt. The climactic confrontation combines elements of Final Figure and Boss Fight, and while the choreography and stunt work is impressive, there’s nothing the film, and indeed the genre, hasn’t shown us before and better. After such incisive pieces of socially critical horror films as “Get Out,” “Halloween,” and “The Purge,” The Hunt feels like a step back and a misfire for Blumhouse. Not to worry though, plenty more scares where that came from. 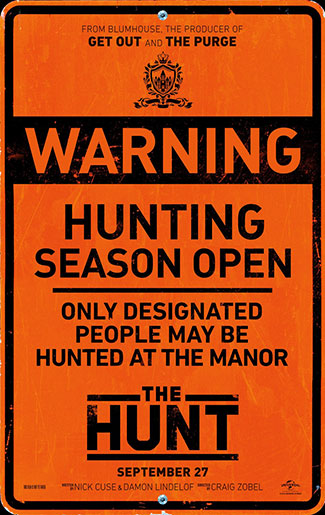