Jude Law (“Captain Marvel”) plays an “entrepreneur” who moves his American family back to his home country of England so he can work for his old company in, The Nest, a deathly slog of a movie directed by Sean Durkin. This movie is so slow moving it practically runs in reverse, with an almost phobic treatment of such oddities as an ambulatory plot and interesting characters. In short, it’s really a waste of time for any viewer, even fans of Law or costar Carrie Coon (“Gone Girl”) or of director Durkin, whose sole previous film “Martha Marcy May Marlene” was much better at holding interest over a 100-minute time span.

Law is Rory O’Hara (pronounced “Oh-HA-rah”), and as with many Law characters Rory is a bit of a caddish jerk. Now, people in the world of high finance tend to be Type A personalities after the almighty dollar, and it feels like Law can play that sort of character in his sleep. Which is more or less what happens here. His portrayal of Rory doesn’t lack for conviction, at least — the viewer is easily persuaded that Mister Law is indeed the rapscallion he plays in this movie. Coon plays his American wife, Alison, who supplements her husband’s income by giving horse-riding lessons. This signifies that she is more down to earth, someone unafraid to physically get her hands dirty, sort of a yin to Rory’s slithery, deceitful yang.

They have two kids, do Rory and Alison: Teen Samantha (Oona Roche, “The Morning Show” TV series) and preteen Benjamin (Charlie Shotwell, “Captain Fantastic”). Like their mother, the children are uprooted from their USA comfort zone and tossed into the wild, zany world of Britain. They are each enrolled in snooty private schools, the better for one to make bad-influence friends and for another to be bullied by larger students for the crime of not being British. Oh, and did I mention that the family moves directly into an old mansion that’s far larger than their needs? It seems Rory likes to tell people he’s rich (he is not rich), and having a mansion and kids in private schools helps sell that image.

This trans-Atlantic move has a significant impact on each of the four. Well, in Rory’s case, his prodigal-son return to his old company is kind of a hero’s homecoming; his old mentor Arthur (Michael Culkin, “The Good Liar”) is glad to have him back in the fold after some twenty years gone. (Naturally, over the course of the film the viewer will learn of the circumstances of Rory’s initial departure, and they should surprise no one). Alison finds herself increasingly mistrustful of her husband and takes to squirreling away money on her own. She also finds herself with a freaked-out horse, also shipped over from the States. The horse is not pleased with the move at all. Meanwhile, the kids are being neglected.

It should come as no surprise that Rory is a bit of a liar. His lies aren’t even convincing; he’s one of those fibbers who just overwhelms people by talking at and over them, making it harder for them to spot the problem. He likes to think of himself as a schmoozer and a high roller, but he’s not very smooth with anyone, let alone clients, and he’s definitely not money-rich. He’s the kind of guy who thinks he’s amazing and honestly believes everyone else agrees when in fact his self confidence just gives a strong early impression. After that, people start to see the facade crumbling, and now Alison is seeing the entire thing come crashing down as Rory tries to make things work in England.

I had in my mind that this was going to be a little more . . . well, interesting. An online synopsis states something about “a twisted turn,” and I spent the entire movie waiting for something, anything, to happen. There are some allusions to the house being scary, and since it’s so large and empty, one might get the impression that the building itself will play a role in the “twisted” nature of the plot. Maybe Alison finds out about Rory’s lies and there’s a big confrontation between them and the house. Spoiler alert — like much of the plot, the house can only bore the viewer to death.

The Nest is only 107 minutes, about average for movies these days, but it felt at least twice as long. There’s no urgency and nothing exciting except for the characters’ own histrionics. Boy, if shouting at a spouse were only an Olympic event, eh? And there are plenty of red herrings in the movie, plot threads that simply go nowhere or make no sense. I’m all for showing, not telling, but this film couldn’t do either right. Add in some truly jarring cuts from scene to scene and you have all the makings for a dull, dull time. 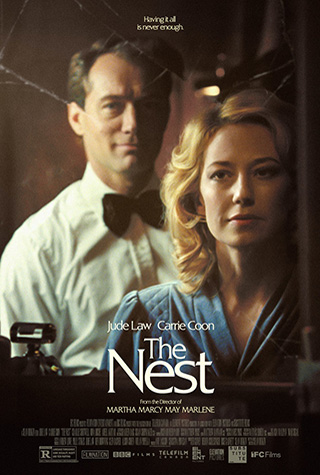