Few documentaries are as touching as Alive Inside, a film that realizes at its core that people don’t just learn from true stories; we’re moved by them. This is undoubtedly assisted by the fact that the film’s two points of focus are concepts we can all relate to in one way or another: Music and aging. There are countless studies into the lives of elderly people — particularly those suffering from diseases such as Alzheimer’s — and into the effect music has upon the human mind, and yet few have thought to put the two together, and even fewer have done so as effectively as Dan Cohen, founder of the non-profit organization Music & Memory.

Cohen, being a social worker, discovered that playing music to people suffering from dementia often had a great impact on not only their demeanor, but even their memory. Asking each of them to tell him what their favorite songs were, he found that even those with severe dementia and/or Alzheimer’s disease were roused by hearing these songs again, and could even recall other aspects of their youth. He asked writer/director Michael Rossato-Bennett to film his work for a day, and seeing the effect Cohen was able to have upon patients at a nursing home, Rossato-Bennett then continued to follow and film Cohen’s work for three years. Over the span of those three years, the team visited several nursing homes and affected the lives of many patients.

Alive Inside begins by showing us a few of these patients in their first interactions with Music & Memory, in which Cohen explains to them that they can listen to music through something called an iPod. He places headphones over their ears, and we watch their eyes light up, realizing instantly the reasoning behind the film’s title. Their faces — and sometimes even bodies — spring to life when hearing music, as was the case with Denise, who hadn’t been able to walk by herself for years, but upon hearing Schubert’s “Ave Maria” again cast aside her walker and began dancing. It’s clear that this vitality has always been inside these people, but with little encouragement to express it, it has been left dormant.

As the film progresses, it delves further and further into the issue of medication and other forms of care provided for old people, and how it is insufficient in terms of providing the happiness that music has been proven to provide. Yet while various professionals appear on camera to tell us just how little the cost of providing music for these patients is in comparison to the millions spent on developing drugs that are ineffective, the film fails to offer much of an explanation of why this is the case. It’s generally understood that some form of red tape is holding back funding, but little is said of what Cohen’s efforts have been to combat these obstacles. The film is also incredibly light-handed in relation to the patients; very often, no backstory for them is provided, and when it is, it is cursory. With little context with which to truly appreciate Cohen’s struggle, and little understanding of the situations of these individuals, we’re left feeling a little like we’ve seen a 78-minute Kickstarter advertisement, rather than a documentary.

In keeping with this theme, the film rounds off with a look into how the video of Henry, one of the Alzheimer’s patients Cohen first played music to, went viral on YouTube, prompting hundreds of young people to visit their grandparents and other elderly people in order to play music to them and help the cause. As a documentary, Alive Inside doesn’t offer much in-depth analysis for what has been shown in the film, and fails to consider the project on a long term scale for patients, instead settling for showing us merely their immediate responses to hearing music. These responses, however, are so inherently uplifting that we’re not too concerned with how informative the film is, and simply enjoy the experience. 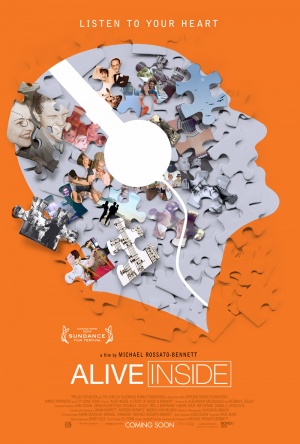