From its first scene of dialogue, older Italian men with permanent scowls etched into their world weary faces mumbling to each other in a Brooklyn bar, Zarra’s Law reads like a mob movie made by someone who wants to imitate the genre but doesn’t speak a word of English. For a significant portion of the movie, it is unclear even who is in the mob, who is part of the police force, and who is secretly an agent for the FBI; with stakes this unclear and a plot that moves so excruciatingly slowly, it’s extremely difficult to root for any of the characters or even understand what’s supposed to be going on.

Zarra’s Law is technically the story of Tony Zarra (Tony Sirico), I guess, who wants to avenge the murder of his brother Roberto Zarra (Salvatore J. Reale) by car bomb when he finds out that Bobby Stax (Wass Stevens), the man who was put away for the crime, is being released from prison only a quarter of the way into his eight year sentence. That being said, Tony only appears to outwardly display the desire to get back at the person responsible for Roberto’s death in the final moments of the film and, by then, so much has transpired that it doesn’t even matter anymore.

Another character who might want revenge, I think, even though he does a lot of other things in the movie that don’t really make much sense either is Gaetano Zarra (Brendan Fehr), Tony’s nephew and Roberto’s son. When he shows up to his father’s funeral dressed in full military attire, Gaetano seems disgusted by his father’s way of life, and disappears, as everyone finds out two years later, to New Jersey. See, while Tony is a retired detective, Roberto was apparently part of the mafia (just like their father), and when Gaetano returns at the beginning of the film after ostensibly not so much as having told his loving uncle and grandmother (Renée Taylor) where he’s been, he appears to be some kind of soldier lawyer who is intimately acquainted with several members of the crime family Tony believes to be responsible for Roberto’s death.

Of these characters (or caricatures, honestly), Frankie “It’s not Frankie-Boy anymore” Andreoli (Brian Tarantina), the man who tried to take over the family while Bobby was in prison and is now having trouble stepping down, is the standout. Gaetano grew up with Frankie, and apparently still feels comfortable holding the man’s own gun to his head and threatening to beat him up and take his money even after he is offered the opportunity to represent Frankie’s wife Vanessa (Kelli Barrett) in a domestic violence dispute.

The plot of Zarra’s Law thickens, or something, when Gaetano is shown to sort of flirt with Vanessa, but not really, even as he meets and immediately starts dating a bartender at the local mob hotspot named Christine (Erin Cummings), “but you can call me Chrissy, or Crystal,” because those totally aren’t completely different names or anything. Christine/Chrissy/Crystal also happens to be a stage five clinger; after knowing Gaetano for what seems like minutes she surmises that he is “a protector,” for some reason, and shortly thereafter picks up a dog from a shelter that she just assumes he will willingly adopt with approximately no notice whatsoever. Fortunately, Vanessa happens to be completely willing to take the dog.

Most notable in the extremely strange and legally unethical relationship between Gaetano and Vanessa is when they go to pick up her son from a birthday party, only to find him dribbling a basketball on a sidewalk in front of a house by himself. Additionally, despite the fact that Frankie’s tendencies toward domestic violence continually leave bruises on his wife’s face and put his son in danger, an implacable judge refuses to even acknowledge the remote possibility that Frankie is actually abusive until he looks at a paper (which Gaetano has, for some reason, managed to acquire from the FBI via Tony) for about two seconds, at which point he immediately changes his mind 180 degrees. Just as legally logical as this poor portrayal of courtroom proceedings is Frankie’s response to his lawyer’s intimation that Vanessa and Gaetano’s relationship might be more than strictly professional.

While at first perplexing in a way that could be misconstrued as intriguing, Zarra’s Law — in particular, when Tony spells what Zarra’s Law actually is minutes before the movie is over — ends up just being cringe-worthy. Its twist deus ex machina ending raises more questions than it solves and, by the time its over, one is made more vicariously uncomfortable by the dramatic cannoli icing and pigeon feeding sequences than the fight scenes and emotional drama that the movie appears to obligatorily include. 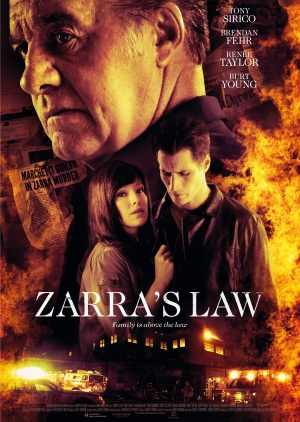