We’ve all seen the trailers for Smokin’ Aces for the past week or so, depicted a wild movie in which the world’s best contract killers are all gunning for $1,000,000 for killing a mob informant Buddy ‘Aces’ Israel (Jeremy Piven). Who wouldn’t we intrigued by a movie that seems to promise a mile-a-minute roller-coaster ride of guns and violence? I know, me being the simple man that I am, I certainly was.

I’m just not sure how I feel about Smokin’ Aces now that I’ve seen it. It certainly was well cast. The cast for this movie is a virtual who’s who of Hollywood. You’ve got, but not limited to, Ben Affleck as bounty hunter Jack Dupree, Andy Garcia as FBI agent Stanley Locke, Ray Liotta as FBI agent Donald Carruthers, Ryan Reynolds as FBI agent Richard Messner, a surprising role by Alicia Keyes as killer Georgia Sykes. The best however is Jeremy Piven, playing the role he was always meant to play — a jacked up, loud, obnoxious scumbag. He’s played these characters so well through the years (Ari Gold in “Entourage” and Dean Prichard in “Old School,” to name a few) and here he simply shines. Now even though the casting was impressive, I questioned some of the characters. I can understand Ryan Reynolds looking to expand his role playing abilities, but he seemed out of place as the straight-laced agent. Most perplexing were the Tremor brothers (Chris Pine, Kevin Durand and Maury Sterling). These guys reminded me of the Angels from the fucking awesome “Judge Dredd” comic books. I found it hard to imagine that these eccentric, backwoods freaks could possibly be considered elite contract killers. And more amazing is the arsenal they manage to tote around with them — I should think a few red flags would be raised seeing these fuckers roaming about.

Now even though Smokin’ Aces delivers on its’ promise of crazy action, bloodshed/violence and sex & drugs, I wasn’t quite sure how the movie wanted to present itself. On the one hand it gives off a vibe of a 70’s campy, blacksploitation film with bigger than life action and cheesy dialogue. Then it does a 180-degree turn and takes a serious tone with the melodrama of Reynold’s psyche and a plot revelation that was rather easy to foresee and more importantly easier to not give a shit about.

All in all, the movie was a good time, but it could have easily been made into a great time if the director (Joe Carnahan) picked a distinct path for the movie to follow. If it would have remained odd and quizzical as an Ed Wood movie, Smokin’ Aces would surely have built up a cult following — which, in my eyes (as they’re the only ones that matter), is a good thing. 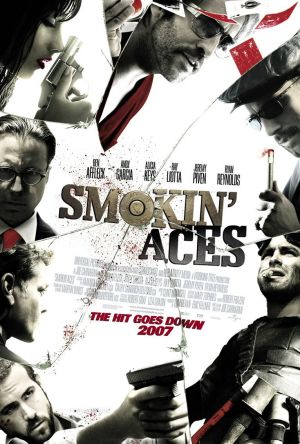