Well, I had hoped that the comedy parody movies had ended with “Scary Movie 2,” as it was the last time I saw a funny movie of this type. But then they went ahead and clubbed me like a baby seal and came out with two more in the franchise and then the unspeakably bad “Date Movie.” Now we’re blessed with Epic Movie.

This time around we’re supposed to give a shit about four orphaned kids, a black, a mutant, an annoying white chick and an Indian guy, who after winning golden tickets find themselves whisked away on a magical journey which shows them they are really a family. In telling us this story, Epic Movie, pokes fun at:

There are others movie/television parodies throughout, but these are the main ones that the writers were trying their damnedest to make funny. And guess what? They failed miserably.

I can’t recall a movie, especially a comedy, where I didn’t laugh. Not one fucking time. Epic Movie, has done the unthinkable – proven a movie doesn’t even have to come close to it’s expectations to make money! We’ve seen close examples (“Superman Returns,” and the aforementioned parody movies, among many others), but never to this extent. This has just proved to me that movie makers are completely out of ideas and they don’t give a shit about the product because they know people will still go to the theaters to see it (it is #1 at box office).

There is one good point to make however. It was a pleasure to see Anna Faris absent from this movie. She has made it her bread and butter to play the dumb-as-shit blonde girl in all the other movies, that had I seen in her in this, I would have punched my dog in the chest repeatedly. Actually, there is another good point too — Carmen Electra is fucking hot.

There really isn’t much else to say about this shitfest. The only thing that comes to mind is, I hope Kal Penn doesn’t get into a rut and keep doing this horrible movies — Seann William Scott is still regretting all the Stifler-type roles he’s done (and probably continues to do). Do yourself a favor and stay away from Epic Movie. It sucks that bad. 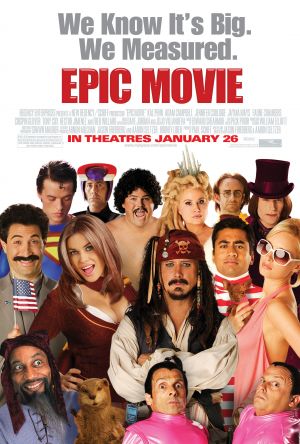