“We are not lost, we are just finding our way” — Stephen Meek, “Meek’s Cutoff”

As depicted in “Wendy and Lucy” and “Meek’s Cutoff,” Kelly Reichardt’s characters are lost without a significant guidepost to hold on to, adrift in a society in which they struggle to fit in. Based on short stories from the 2009 collection “Both Ways Is the Only Way I Want It” by American writer Maile Meloy, Reichardt’s latest feature, Certain Women, displays the struggle for connection of three women whose loneliness mirrors the economic and spiritual malaise gripping a part of 21st century America. Set in the rural West, the film features an impressive cast that includes Laura Dern, Michelle Williams, Kristen Stewart, and newcomer Lily Gladstone, all complex and resilient characters, yet individuals who resist any outward expression of their inner feelings.

In the first section, Laura (Laura Dern, “The Founder”) is a personal injury lawyer distracted by a mid-day affair with the married Ryan (James Le Gros, “Big Miracle”). When Fuller (Jared Harris, “Allied”), an emotionally distraught client refuses to accept the fact that he has no cause of action against an employer for an injury suffered on the job, Laura must balance her innate feelings of empathy with her fears that he may become violent. When he takes a night watchman hostage, the police turn to Laura to confront him, an acknowledgment of her personal strength.

In this segment, the open spaces of the West so beautifully depicted in “Meek’s Cutoff” are transformed into the spiritually empty local mall with its Starbucks and chain stores, seemingly mocked by a contingent of Native Americans dancing for the customers. In the second story, Gina Lewis (Michelle Williams, “Manchester by the Sea”) is in an unhappy relationship with husband Ryan (Le Gros), who appeared in the opening segment as Laura’s secret lover. As they plan on building a home in the area, the family’s emotional state is reflected in the attitude of her teenage daughter Guthrie (Sara Rodier, “Bad Teacher” TV series), who makes little effort to hide her resentment towards her parents, causing her dad to implore her to be nice to her mother.

In their visit to Albert, an elderly neighbor (Rene Auberjonois, “This is Happening”) husband and wife attempt to convince the old man to sell them a pile of sandstone that has been in the front of his house for years, property to which he has an emotional attachment. Marital strain is evident in the conversation in which Gina takes the lead, however, but the focus is on her needs rather than Albert’s feelings and when Gina waves to him from her car when she is leaving, he simply stares blankly at her through his window.

In the longest and most powerful of the three stories, lawyer Beth Travis (Kristen Stewart, “Personal Shopper”) has to drive four hours each way to teach an evening class on Education Law. One of the attendees, Jamie (Lily Gladstone, “Subterranea”) is a lonely rancher who shows up each week to the class even though she is not registered. Apparently physically attracted to the instructor, they meet after each class at the local diner, but the conversation about Beth’s awful drive to and from work is less important than the poignant expressions on Jamie’s face, looks that longingly search for clues that her attachment to Beth might be mutual. 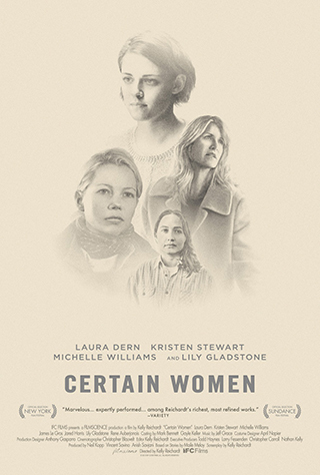