Mr. Jones, directed by Agnieszka Holland (“Julie Walking Home”) from a screenplay (Holland’s first) is based on the real life story of Gareth Jones (flawlessly played by James Norton, “Little Women”), a young Welsh journalist. In the 1930s, he managed to uncover and reveal to the West -– through a series of feature newspaper articles — the tragedy perpetrated by Joseph Stalin on the Ukraine. Millions of Ukrainians starved when the Stalin-controlled government ordered the region’s harvest sent to Moscow. The policy resulted in what became known as the Holodomor, a Ukrainian term roughly meaning, “To kill by starvation.” Not that Jones’ revelations had much impact on England or the United States, both of which were more concerned with assessing Stalin’s position towards Germany given that Hitler’s aggressive rhetoric was saturating the news. Others continued to champion the Soviet Union’s modernization miracle. Much debate focused on whether another world war was on the horizon, and if it was, how distant was it? Some world leaders, for example, Lloyd George (expertly and robustly played by Kenneth Cranham, “Official Secrets”), viewed the threat of a new armed conflict as a mirage. Jones, however, who worked for Lloyd George, was skeptical about the impressive Soviet transformation. The young reporter had kept up on current events, having recently garnered an interview with Hitler and Goebbels.

The first inkling we get that Jones believes something is amiss in Stalin’s Soviet state occurs when he ponders how a country undergoing impressive modernization and industrialization could flourish, while financial indicators suggested it was economically in near ruin. Where was Stalin getting the money to hire British engineers and to import material to build new factories and schools? Was Stalin hiding something so that Western investors would continue to trust him? Jones uses his journalistic chops in an effort to persuade Lloyd George to send him on a fact-finding trip to the Soviet Union. George demurs, but Jones is determined. The intrepid journalist seeks entry into Moscow as a foreign reporter with the hopes of interviewing Stalin. In Jones’ favor is the fact that he speaks Russian, and is familiar with the Ukraine via the stories his mother related when she returned from teaching English in the region, considered Russia’s agricultural breadbasket.

Soon the dramatic question of Mr. Jones becomes whether Jones will have the skill, finesse, and luck to confirm his suspicions: That some devious, perhaps iniquitous policy exists in Russia that undergirds its progress. Using gentlemanly tact and providing a letter of reference from George, Jones presents himself to the Russians as a model journalist. He impresses the bureaucracy with his fluent Russian, and is awarded a press visa. Soon after, he arrives in Moscow.

James Norton, in the role of the determined reporter, displays a seamless blend of geniality, assertiveness, and guile that helps insinuate himself into the Moscow-constrained foreign correspondents corps. Additionally, Jones comports himself well — impeccably dressed with a professional, impartial demeanor. This helps him finagle his way into obtaining permission to travel by train to the large farming region of the Ukraine and its environs.

Agnieszka Holland and her creative team employ stylish visual subtleties to depict Jones as a resolute truth seeker. The camera follows him with steady tracking shots to emphasize his determination, and he is frequently framed in close-ups to emphasize a mien that communicates strength of character. In addition, the cinematography and art direction are placed in the service of constructing a sinister Muscovite cityscape, where dark forces seem hidden beneath the surface. For example, despite the many sequences depicting spacious, well-appointed hotels for foreign visitors and prominent office buildings that house Russia’s extensive bureaucracy, interiors are dark and desaturated. Even the inflowing sunlight entering the windows seems anemic. Adding to this atmosphere is an array of characters that flit through the nouveau-Soviet edifices — an international crowd that seems to move with purposeless ennui. Two characters with whom Jones crosses paths are the Pulitzer Prize-winning newspaperman Walter Duranty (played with an exquisitely derisive demeanor by Peter Sarsgaard, “Jackie”) and Ada Brooks (Vanessa Kirby, “Mission: Impossible – Fallout”), his disconsolate assistant. At other times, the camera moves in tight to frame small groups of Soviet bureaucrats in order to evoke a claustrophobic mood.

Jones’ train trip to the Ukraine is a continuation of his relentless, solitary journey. When he stealthily steps off the train, he trudges through the Russian slush, becoming a lone, shadowy figure in the snowbound landscape. Movement becomes difficult, but Jones’ resolve gives one the feeling he is determined to fulfill a personal destiny. Soon after, he becomes an eyewitness to a bleak, surreal world with bodies of desiccated humans and animals — scenes as disturbing as any you’d find in a post-apocalyptic movie.

Jones returns to Moscow, where he evokes the displeasure of the Russian government. Then, safely out of Mother Russia, Jones travels to his home country of Wales, where his observations and investigations are published. His reports are not welcomed, however. They could jeopardize international alliances, not to mention threaten a few high-profile careers. It’s not surprising, given the climate of Europe in the 1930s, that there is a backlash to his reportage. He is accused of naïveté and exaggeration. In contemporary parlance, he could be accused of disseminating fake news. This latter aspect was a motivation for Holland to revisit and imaginatively interpret this dark period in history that occurred nearly ninety years ago.

There is little to no humor in Mr. Jones. It perseveres in maintaining its minatory mood. It’s true that even Macbeth has scenes of comic relief. But Shakespeare’s play was about regicide. Genocide is another matter. The film takes some liberties with the specifics of the historical record (it’s a movie, after all), but the basic story is true and harrowing, even if the facts are dramatized. 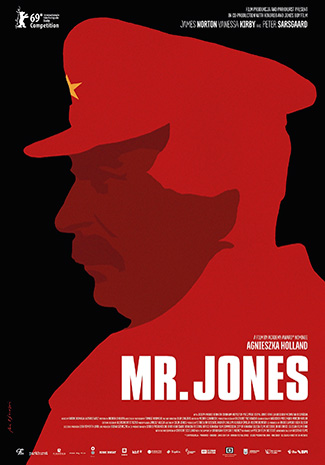