If you were presented with the opportunity to see into your future, would you take advantage of it? What kind of effect would this knowledge have on the way you live your life day-to-day? How would your interactions with your friends change? Would these changes be positive or negative . . . and for how long would you have control over what comes next?

These exact questions confront friends and roommates Finn (Matt O’Leary, “The Lone Ranger”), Callie (Danielle Panabaker, “Piranha 3DD”), and Jasper (George Finn, “Just Before I Go”) in Bradley King’s Time Lapse. Working as building managers for an apartment complex, they help tenants with everyday tasks like toilet malfunctions and plant watering, and become concerned when one of the tenants disappears. Mr. Bezzerides is late on his rent, his car is collecting parking tickets, and his newspapers haven’t been brought inside. When they enter his apartment, they discover a wall covered with Polaroid pictures of their own living room, each documenting their activities for days and days on end, including days when the room was empty. There’s also a strange contraption they realize is a giant camera pointing out the window, and they notice a new Polaroid sticking out of it — a photo of their empty living room with a knocked-over coat rack in the frame. Confused, they decide to check out Mr. B’s storage unit, hoping to find clues about the camera; instead, they discover the burnt corpse of the missing man. Completely unnerved and frightened, they return to their apartment to determine their next steps. When Callie accidentally knocks over the coat rack, and they realize the camera is actually taking pictures of scenes 24 hours into the future, their predicament becomes much more complex.

Jasper, a compulsive gambler, convinces his roommates to stick out the situation to see what develops (pun intended), and, for a while, things go swimmingly: Finn, a struggling painter, regains his inspiration as well as his affection for Callie; Jasper begins making steady, successful bets with his bookie, and Callie finds some new self-confidence as Finn’s muse. But, alas, things turn sour as Jasper’s increasing paranoia and unending winning streak tips off his bookie. Ivan (Jason Spisak, “Piranha 3D”) appears with his muscle Marcus (David Figlioli, “I Know Who Killed Me”) in tow and forces Jasper to reveal the source of his success. Ivan takes over control of the camera, and the roommates’ lives snowball towards chaos.

What’s refreshing about Time Lapse is its focus on the psychological aspect of forbidden knowledge and the impact on a close-knit friendship. Once the roommates discover the secret of the Polaroids, it’s hard for them to resist the temptation, as it probably would be for anyone. What’s especially interesting is how tangled their control over the situation really becomes. They make a pact early on, jokingly at first, that they won’t break the cardinal rule of time travel — don’t try to change the future. However, as the pictures become more and more foreboding, they struggle with the obligation of recreating the scenes depicted in the Polaroids. The obvious solution seems to point towards making different decisions in order avoid the predicted events, but then they remember Mr. B, the dead tenant, whom they believe tried to change his future and was punished.

The hows and whys of the future-telling camera’s function are irrelevant to the plot, and the story and acting are engaging enough to foster acceptance of this fact. While some of the early photo situations are pretty predictable, the tension created as the threesome gets closer and closer to picture-time each evening is actually rather effective. There are times you think they just won’t make it in time, or that one roommate will ruin the future for the other two. Additionally, as the film continues, and the psychological tension gets stronger and stronger, the resulting emotional explosions don’t always come in the forms you’d expect.

Written by BP Cooper in collaboration with writer/director Bradley King, Time Lapse is a pleasant surprise and festival darling of a small-budget film. The story ponders intriguing questions about the nature of fate and free will, and while we’ve all seen many films (both dramatic and comedic) that warn against trying to change the future, they don’t all postulate that we may be intentionally bending our free will to match our fate. Are the roommates actually at the mercy of fate, or is fear driving them to fulfill events they truly could change if they tried?

Overall, Time Lapse takes a fairly simple premise and stretches it into a film that works on a number of levels — believable interactions between characters, simple-but-engaging situations that build tension, and a great little ending that’s pretty satisfying. The film may not be hugely ground-breaking, but what its developed is certainly worth a look. 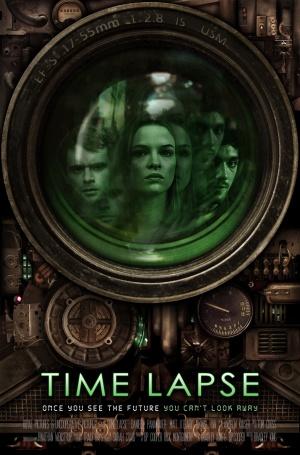