Nightmarish visions abound in Romain Basset’s horror mystery Horsehead and the narrative elements are so tightly focused here that the picture’s success relies almost entirely on the effectiveness of those visions. Basset makes the bold move to let the visions swallow the story so that the movie threatens to topple off the edge of reality at any point, which puts pressure on the director to deliver a tone and mood worthy of a cinematic dreamscape.

It’s been done before, of course, but often movies so deep into the state of unconscious experience try to blur the lines of reality so that we’re forced to question the veracity of what we’re seeing. Horsehead, however, never tries to trick us since the nightmare sequences are treated as such an intense sensory barrage that it’s hard to mistake one experience for the other. Basset wants us to be aware when we’ve slipped below, which quickly occurs more often than not.

What makes Horsehead such a curiously intriguing and oddly memorable picture is how the visions are captured so cacophonously without becoming obnoxious and so relentlessly without becoming repetitive. It’s a tough spot that Basset puts himself in because the movie’s impact hinges entirely on the evocative nature of the visions and on beautiful star Lilly-Fleur Pointeaux’s ability to make us care with what often amounts to a silent performance.

The story begins simply with Pointeaux’s protagonist Jessica returning to her rural childhood home in a small French town. Jessica’s grandmother has recently passed away and so a visit is in order, although tension between Jessica and her mother Catelyn (Catriona MacColl) is clear from the moment she arrives. Jessica’s stepfather (Murray Head) is an amiable guy who does his best to smooth over the rift between mother and daughter, usually with little success.

Upon arriving, Jessica is soon besieged by visions that link her to the deceased grandmother and hint at an eerie secret involving the church, Catelyn’s pregnancy years prior, and a disturbing humanoid figure who fulfills the promise of the pic’s title rather literally by having a disturbing horse’s head on its shoulders. The creature is partially brought to life with a frightening mask that adds a tangible quality to the surging surrealism.

Jessica soon falls ill and begins to dip into the dream world so often that the movie eventually treats the waking world as a brief pit stop. Basset hurls us into the nightmare visions and teases out the truth of what’s happening, but where Horsehead really finds its stride is in the depiction of the nightmares and the sense of assaulting horror that they contain.

The plot and the answers that Jessica seeks are mainly trivial, which isn’t to suggest they don’t leave an impression, but that the ideas are ones we’ve encountered before. They’re well executed, but that’s the point here. Basset acknowledges that the narrative elements aren’t particularly original, so he packages them in an original way. He comes at us with an energy and strange mix of sexy and nasty that breaks down our sense of cinematic surroundings and determinedly inserts us into Jessica’s dreamscape experiences, aligning us with her perspective.

To do this effectively, Basset has to leave behind certain conventions of modern horror cinema and commit to a visceral eruption of his imagination, complete with grinding sound effects and poetic flashes of gore. The visions rarely have any dialogue spoken in them and even the lines that exist are attributed to flashbacks, so while the sound mix is aggressive, Basset still forces himself to explore the nightmares through inventive imagery.

A logline for the movie mentions horror icons Mario Bava and Dario Argento as influences and while the Grand Guignol style and emphasis on visuals support that suggestion, I also found shades of Takashi Miike in here due to the clarity of vision and relentlessness of delivering it. Others may find further influences, but regardless of who or what has imprinted on Basset, it’s clear that this new filmmaker has both imagination and the skill to bring it to light. Horsehead takes its inspirations and morphs them into something fresh and interesting, a cinematic nightmare enveloped by its own experience. 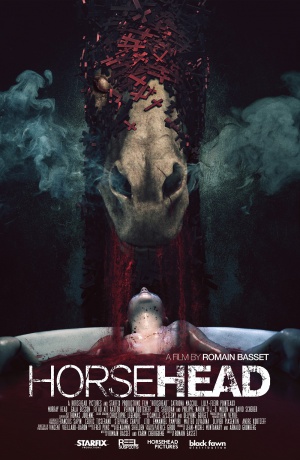