Sam Peckinpah’s “Straw Dogs” released theatrically in 1971. Based on the novel “The Siege of the Trencher’s Farm” by Gordon Williams, it came out the same year as “A Clockwork Orange,” “The French Connection,” and “Dirty Harry,” causing quite the uproar from conservative Americans, who were worried about the increase of violence in movie houses. Nevertheless, that didn’t stop many critics from eating it up, despite countless censorship issues and its purported endorsement of misogynistic sadism and fascism. Today, it stands as one of the filmmaker’s best works, and in the lead, Dustin Hoffman gives one of the most enticing performances of his career. But, as with every classic film (that’s not entitled “The Godfather”), studio execs have adapted Peckinpah’s work for a modern audience (who obviously couldn’t have just rented the original). And director/writer Rob Lurie is responsible for the tasteless exploitation that is 2011’s Straw Dogs.

In this eponymous remake, James Marsden (“Hop,” “X-Men”) fills the role of David Sumner, a screenwriter working hard on his debut screenplay, a Stalingrad war-epic. Eager to escape urban temptations, he travels to the deep South alongside his wife, Amy (Kate Bosworth), a somewhat successful actress and former resident of the Mississippi town. Once there, they move into her old home, a comfy old retreat, where James expects to churn out a classic. What’s stopping him, however, are the neighbors: Charlie (Alexander Skarsgård), leader of a group of misfits (whom David hires to fix his barn roof) and Amy’s former spark; the mentally-handicapped Jeremy Niles (Dominic Purcell), a domineering lad, ostracized because of his dark past; and Tom Heddon (James Wood), a former High School coach and rowdy alcoholic, who spends his days at the local pub, downing beers, telling stories (amongst them, a riveting tale about a man who, armed with a machinegun, fends off a vicious bear), and attacking any bartender brave enough to say that he’s had enough to drink. With that, there forms a schism between the locals, a close-knit community of churchgoers, football fans, gun enthusiasts, and handymen, and David, an atheist, artist, classical music junkie, and city slicking creampuff. Of course, the good ole boys don’t like outsiders, and will do anything to force them out: What starts with the murder of their cat, and hoots and hollers at Amy, results in rape and torture. But is the thick-rimmed Mr. Sumner strong enough to fight back? Unfortunately, you’ll need to see the film to find out.

There isn’t a shred of likeability in this watered down rehash. Unlike Peckinpah’s production, a tense, sometimes nihilistic, ‘Nam-era exploration into the human psyche, Lurie’s Straw Dogs is a celebration of gratuitous violence, which, by sick faith, has become a trademark in mainstream horror. And, not being a fan of mutilations, amputations, and decapitations (or really anything that ends in an “ations,” save for vacations), it’s ironic that I found the inventive uses for bear traps, nail guns, and boiling water, an appreciated escape from sheer boredom. But it’s not unlikely that there are sociopolitical undertones hidden beneath the bloodshed and inept writing, however, it becomes a chore to decipher them, especially considering the one-dimensional stereotypes we’re stuck to trudge along with.

David’s from L.A., wears John Lennon-esque shades, drives a convertible Jaguar (complete with fake hood ornament), owns several bathrobes (a staple to any esteemed gentleman’s wardrobe), and drinks Bud Light. As an urbanite, it’s his job to be insecure, meek, and Harvard-educated. As a Southern chap, it’s Charlie’s role to be emasculated, jealous, and prone to violence. Though, what should play out as a balls to the wall game of cat-and-mouse between brute force and calm wit, is reduced to 90 minutes of Amy stripping down for no apparent reason, Coach throwing punches, Jeremy having strange, unexplained, pedophilic delusions, and jabs at Sheriff John Burke (Laz Alonso), for being one of two African-Americans in the area (the other, is Larry, an auto mechanic, played by Tim Smith). The last few minutes are dedicated to the advertised showdown, a less-than-subtle sequence, in which David must fortify his retreat to protect Amy from rampant rednecks. Here, Lurie tries to explore whether or not it’s possible for the pussycat to become a lion, but what was shocking in the ’70s, doesn’t have much of an impact nowadays.

The film’s title, Straw Dogs, derives from a classic Chinese text called the “Tao Te Ching,” which compares ceremonial straw dogs to objects without substance. That’s the perfect description of Lurie’s latest: Without any fucking substance. 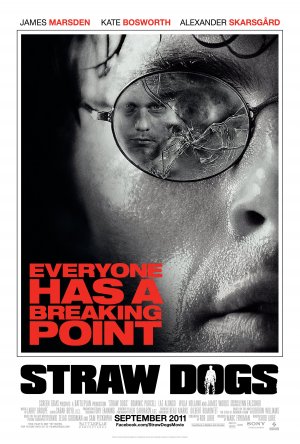