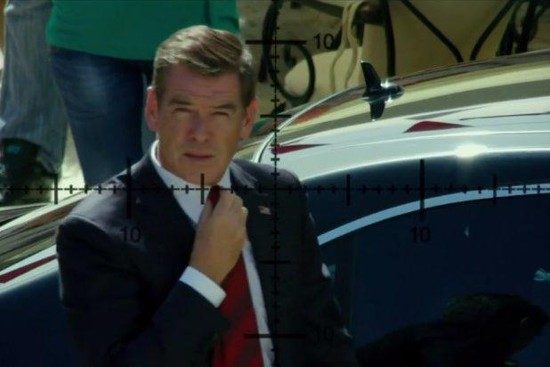 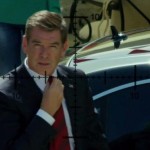 If you haven’t heard, Pierce Brosnan (“A Long Way Down”) is back as Agent 007 and he’s better than ever . . . well, no, actually that’s misleading and untrue. Brosnan, 61, really has returned to the spy genre, only not as Ian Fleming’s elite spy, but as Bill Granger’s ex-CIA operative Peter Devereaux in The November Man.

The film is full of genre clichés, stiff dialogue (especially from Bill Smitrovich, “Ted”) and narrative holes — or craters in this case — but the blood-spilling and bullet-whirling brings back “Brosnan the badass” in a loud, even rebellious fashion. The film is also a helpful introduction to another thriller star in the making — Luke Bracey (“G.I. Joe: Retaliation”), who carries a ruthless killer’s swagger with the emotional baggage of any high-ranking government agent quite convincingly. That’s usually a recipe for success, unless the actor is bogged down by scabrous writing, which is, unfortunately, the case in The November Man.

That cavil aside, Roger Donaldson’s film is still fun to lay eyes on. It is violent, turbulent, and its main character is typecast predictably, but also admirably. Sporting signature Bond-esque gray suits and embodying the MI5 agent’s arrogance, Brosnan as “The November Man” is a pleasure to watch. He’s quick on his feet, figuratively and literally (believe it or not) and appears to be ecstatic in his jump back to the genre. Also, in a tidbit that should not go unmentioned, Olga Kurylenko (“Oblivion”) is gorgeous and charismatic.

Narratively, The November Man begins with Devereaux and a younger David Mason (Bracey) working the security for an ambassador in Montenegro in 2008. The detail doesn’t go as planned, a horrific accident happens and the two split — Devereaux retires from the CIA and Bracey’s life as a coldblooded killer ensues. In current day Moscow the two cross paths again, this time on opposite sides of the political spectrum. The CIA is trying to forge an alliance with Russia and its dirty presidential candidate, Arkady Federov (Lazar Ristovski, “Casino Royale”). Agent Bracey is sent to eliminate those loose ends which could expose Federov’s ruthless past. Those loose ends happen to be Devereaux who has a wealth of knowledge from his CIA days and Alice Fournier (Kurylenko), a woman with her own damning evidence that could expose the Russian magnate. 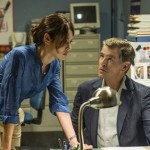 With regard to production values, there’s a lot to praise. For one, the filmmakers did not, for a second, consider minimizing the violence or catering to virgin ears. There are a few bone-chilling moments and horrifically violent scenes that will make viewers praise the production team for their verisimilitude, when they could have instead resorted to trite CGI explosions and bloodletting scenes. The November Man spans all of Belgrade wonderfully and uses many subtle tricks of the trade from the thriller business to try and get viewers hooked into the story. At times, they succeed, with drawn out action sequences, suspenseful music and quality audio for radio dialogue. The screenplay, adapted from Bill Granger’s book, There Are No Spies, by Michael Finch and Karl Gajdusek doesn’t keep up, though. The at-times-majestic camerawork seems miles ahead of the narrative, as it out-duels almost everything about the cliché-ridden story. Still, the film’s lighting follows Devereaux quite neatly throughout the movie, and Kurylenko’s costumes are definitely something to take notice of — especially the risqué dress with the glitzy red wig.

At 108 minutes, The November Man moves nimbly and delivers very much like other films such as “Jack Ryan: Shadow Recruit” or even “Safe House.” It has just enough aesthetic chops to keep viewers entertained, so long as they don’t dissect it and see it for what it is — a late summer, fast-paced espionage flick with a strong cast and limited depth. 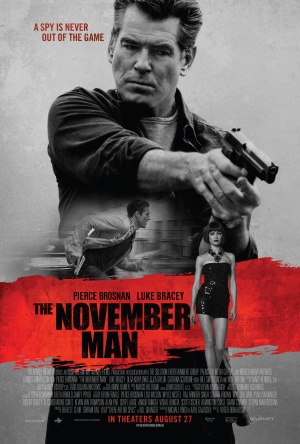