Britain has a great range of cities, some of which receive extensive cinematic treatment. London is the most iconic, but Manchester, Sheffield, Birmingham, Edinburgh and Glasgow have also graced the silver screen. But is there a more evocative, romantic, inspiring and fascinating city than that Las Vegas of the United Kingdom, that Dubai of England, the shining beacon of light, joy and love that is . . . Blackpool? If so, director Jason Wingard should probably film it, since Wingard portrays Blackpool as a welcoming and vibrant city, where the lost can look for home and the hopeless seek connection.

Eaten By Lions, directed by Wingard and written by him and David Isaac, is the story of Omar (Antonio Aakeel, “Tomb Raider”), a teenager of mixed racial heritage from Bradford, searching for his father in Blackpool. It is also the story of Omar’s relationship with his brother Pete (Jack Carroll, “Trollied” TV series), and their mutual journey to maturity. It is a story of family, community, romance, memory, regret and race. In short, it is a remarkably complex tale that manages to balance this array of themes in a manner that is warm and affectionate while also moving and bittersweet. Best of all, it never feels portentous or weighty because it is frequently very funny.

Key to the film’s success is the central relationship between Omar and Pete. Both teenagers mourn the loss of their Gran (Stephanie Fayerman, “The Bill” TV series), who has raised them after the death of their mutual mother and Pete’s father in the titular incident at a safari park. Interestingly, this incident never appears in the film and is only referred to, making the title ambiguous. Perhaps it refers to the dangers these teenagers face in the world, a point underscored by various references to the boys looking after each other. And they need to, since both of them are disadvantaged in interesting ways.

Pete is disabled and requires a walking frame, but he is also a shoplifter, a liar and readily exploits Omar, who is shunned by Pete’s relatives Ellen (Vicki Pepperdine, “My Cousin Rachel”) and Ken (Kevin Eldon, “Hot Fuzz”). Aside from Pete, Omar is alone and victimized by racial prejudice from Ellen and Ken, and the film’s main narrative thrust is his search for his father, about whom he knows virtually nothing. Although initially determined to strike out on his own, Omar allows Pete to accompany him, and much of the film’s enjoyment derives from their mutually antagonistic/loving banter. The two leads are compelling and engaging, Carroll imbuing Pete with a cheeky arrogance that veils a deep fear. Aakeel has the more difficult job, expressing Omar’s internal turmoil through eyes and physicality as much as dialogue. His stance blends vulnerability with determination, and it is hard not to warm to him and his struggle.

Omar’s struggle is with loneliness and isolation, often captured in wide angled long shots by director of photography Matt North. These shots characterize the film as a whole, as images of a largely deserted Blackpool Pier capture Omar and Pete walking in isolation, the mise-en-scene and location echoing their somewhat pathetic, but still endearing optimism. It is also within these wide shots that our heroes form connections with the colorful characters of Blackpool. A curiously generous fortuneteller (Tom Binns, “Hospital People” TV series) gives them important information, while a chance encounter at an ice cream van brings Omar into contact with the feisty and big-hearted Amy (Sarah Hoare, “Powder Room”), who subsequently introduces them to Ray (Johnny Vegas, “The Brothers Grimsby”), a sardonic hotel manager who manages to be both repulsive and generous. These characters are often figured against a wide backdrop, be that of a hotel lobby, an expanse of sky, sea or sand, emphasizing both the boys’ isolation and the vital connections that they form. Perhaps ironically, similar wide shots are used when Omar and Pete find the home of Malik (Nitin Ganatra, “Charlie and the Chocolate Factory”) and his extended family. This family is captured in wide shots within an expansive living room, and the reverse shots present the diminutive teenagers, once again a large backdrop although an interior one. Yet across these wide spaces, connections and relationships both touching and amusing develop.

The extended family that Omar may or may not belong to features some colorful and engaging characters as well. Malik makes plenty of pretense for authority, but is regularly put in his place by his wife Sara (Hayley Tamaddon, “Coronation Street” TV series); patriarch Saftar (Darshan Jariwala, “Million Dollar Arm”) exercises gravitas balanced with indulgence, and any reactions about his car are priceless, including another wonderful wide-angled shot when Saftar practically breaks the fourth wall with his plea regarding the vehicle. Major laughs and pathos are provided by Irfan (Asim Chaudhry, “High & Dry” TV series), a flamboyant man-child who loves music, his car and his fashion, and considers being deprived of satellite television a terrible punishment. Perhaps most striking is Parveen (Natalie Davies, “Coronation Street” TV series), a daughter of Malik and Sara who appears mute, but as the drama develops steadily reveals unexpected and wild qualities, which Pete finds both alluring and alarming.

Amidst all this humor, there are serious elements to Eaten By Lions. A thread of grief and loss runs throughout the film, both in relation to the loss of Gran as well as the lion-related death that foregrounds the plot. Omar repeatedly describes himself as having no family or home, and despite Pete’s insistences that he is not, Omar’s isolation and loneliness is hard to deny. Omar’s suitcase and the urn for Gran’s ashes are potent visual metaphors: Omar carries them with him for the early part of the film and it is only after he loses this baggage that he starts moving forwards.

Perhaps most impressively, Wingard incorporates a critique of British racial attitudes, in a way that recalls the higher profile “Get Out.” Ken and Ellen represent middle class Britain, very caring and protective of their nephew Pete, and ostensibly generous to Omar by taking him in as well. But Omar is consistently ostracized and blamed for putting Pete in danger or being a bad influence, an influence explicitly tied to his race. When Ken and Ellen encounter Malik’s family, their racial prejudice becomes apparent, as Ellen refers to the Muslim family as “you people,” “like you,” “your sort,” delineating clear perceived distinctions between “us and them.” Significantly, however, this family is multicultural: Saftar runs a successful business of seaside gift shops (what could be more British?); they wear both traditional Muslim attire and contemporary British clothing. Their gathering is culture specific while also being modern, as they welcome the two strays that come to their door, while the family’s music and passion is in stark contrast to the insular and closed-off nature of Ken and Ellen, for whom a jigsaw is exciting.

Eaten By Lions, therefore, pulls off quite a remarkable feat: It is a broadly humorous fish-out-of-water tale that features colorful characters and witty dialogue, and manages to perform a penetrating social critique without ever overwhelming the drama with the politics. For this, it deserves to be seen and hopefully embraced by all. 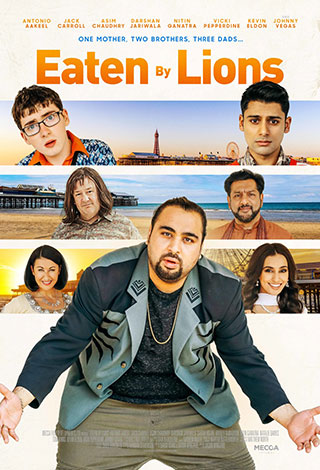