In 1999, “American Pie” had its main character violate a warm apple pie. In 2003, Billy Bob Thornton portrayed the most offensive, self-destructive, and felonious Santa anyone has ever imagined in “Bad Santa.” Now, attempting to grab the mantle of the most provoking and/or distasteful movie ever is A Very Harold & Kumar 3D Christmas. There are topless angels hanging out with Jesus, naked, lesbian nuns lathering each other in the shower, and a baby who imbibes so many illegal substances it will probably will not sober up for the next decade.

The 3D in the title is a gimmick. It is not subtle and it is not there to emphasize action sequences or dazzle the audience with its spatial abilities. It is there to assault the audience. One character, while obviously hawking a brand name mentioned 3D television set and all of its revolutionary gee-whiz characteristics, points at the audience to remind them early on that, “You are watching this in 3D!” Harold (John Cho) wonders aloud if the whole 3D shtick is already passé. The movie responds to that quickly with a scene designed to astonish the audience and make them feel better about the extra dough they just spent to rent their 3D glasses. Eggs are thrown in slow motion, someone pees on a windshield, a more solid form of fecal matter is splashed across the side of a vehicle, and to achieve the bodily fluid trifecta, a 3D ejaculation sequence finds its way towards the audience.

Plot is secondary to the 3D onslaught. Once again, Harold and Kumar (Kal Penn) find themselves on a specific mission; this time it is to replace a Christmas tree to appease an angry father-in-law (Danny Trejo). The vast majority of A Very Harold & Kumar 3D Christmas keeps that particular plot line in the background so it may focus on more immediate sub-plots and situations to incorporate more 3D wizardry. There are Russian gangsters, Santa Claus himself, and yes, Neil Patrick Harris as Neil Patrick Harris.

Even though there is a constant barrage of every substance imaginable being hurled at the audience in the third dimension, it is usually quite effective. Kumar, still getting by in life with his preferred herb, blows smoke at the camera which produces a very interesting effect in 3D. Harold and Kumar also have more depth to their characters than Cheech and Chong do. They significantly expand on that stale one joke theme of being high all the time mainly because the situations they find themselves in are much more life threatening and outrageous.

The situations do not always work though. There is an unfortunate claymation episode and a ridiculous musical ensemble which is only there to showcase Neil Patrick Harris. However, the humor, the shocking set-ups and pay-offs the character relentlessly dodge, and the overall extreme and foulness of the whole mess frequently work. I slightly recommend A Very Harold & Kumar 3D Christmas even though I recognize Harold and Kumar are not making fun of 3D or commenting socially on it; they are cashing in on it. Look past the gimmick, and you will find the next film to wear the badge of most extreme comedy; at least until the next disgusting comedy rolls out to take its place in the next year or two. 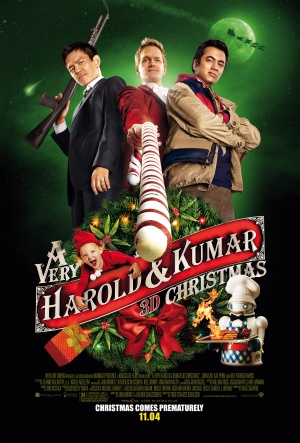