Georges Prosper Remi, better known by his pen name Hergé, was the revolutionary behind the Adventures of Tintin comic series, which he wrote and illustrated. Known for the meticulous research that went into each chapter, its vivid humanism, political satire and the “ligne claire” art style he used (and pioneered), which utilizes strong lines, cast shadows and cartoonish characters against realistic backdrops. Meanwhile in Hollywood, Steven Spielberg had his sights set on the franchise since 1983, when he first bought the rights. However, it took several decades for production to begin, and in 2008, he started to film his adaptation. Scheduled for release in 2010, his retelling of the first three books was constantly delayed before releasing this holiday season. Unfortunately, much of the magic has been lost.

In The Adventures of Tintin, the titular reporter and adventurer (voiced by Jamie Bell), his canine companion, Snowy, and Haddock (voiced by Andy Serkis), a drunken shipmaster, embark on a treasure hunt. Their key to finding the lost fortune is a model ship sold to the intrepid journalist at a street market. Sculpted after a ship called the Unicorn, it houses one of three scrolls rumored to reveal the location of the riches. Like all great explorers, they have a nemesis, the sinister Mr. Sakharine (voiced by Daniel Craig), who is also interested in the loot and resorts to murder, kidnapping, and the cacophonous vocals of opera singer Bianca Castafiore’s (voiced by Kim Stengel) to secure it.

The first animation of Spielberg’s career is an exercise of style over substance. While the motion capture technology creates photorealistic character models (which, surprisingly, don’t suffer from the “zombie eye” phenomena that’s plagued films like “The Polar Express”) and locations, the story is appallingly hollow. There are moments of brilliance here-and-there, yet, for the most part, the narrative lacks a cohesive flow. The Adventures of Tintin visits a slew of places (including a beautiful rendition of Monaco), but plays out like a spasmodic series of scenes that don’t build on one another.

It doesn’t help that Steven Moffat, Joe Cornish and Edgar Wright’s screenplay is painfully uneven. Dialogue is overwritten, with characters pointing out the obvious or redundantly narrating prior events, while the storyline is rushed and saturated with pointless subplots (such is the case of Aristides Silk — voiced by Toby Jones — a pickpocket who’s essential to the novels, but trivial here). Had the journey not continuously lulled me to sleep, the inspired action — exalted by John Williams’ score — would’ve been more satisfying. Reprising the grandiosity of his opus “Raiders of the Lost Ark,” the way Spielberg handles the final showdown — a sequence that has two seaport cranes smashing into each other — is unmatched.

Among the few successes, casting is spot-on. Bell sounds just like I’d imagined Tintin to and Serkis continues his yearlong winning streak, cementing his status as one of the industry’s most undervalued talents. Also Nick Frost and Simon Pegg deliver as Thomson and Thompson, two identical police detectives with a liking to bowler hats and canes and the comic relief. But my problem was never with the voice acting, rather in that the characters don’t have anything interesting to say — a letdown considering the names attached.

All in all, the illustriousness of The Adventures of Tintin may be befitting for a director who popularized the blockbuster, but it’s also used to hide the film’s lack of depth.

'Movie Review: The Adventures of Tintin: Secret of the Unicorn (2011)' have 4 comments 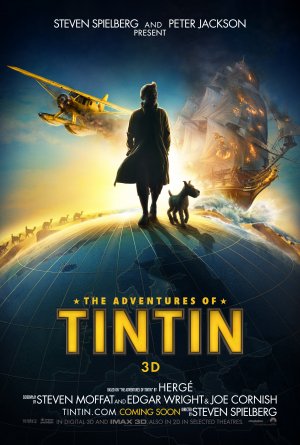 The Adventures of Tintin: Secret of the Unicorn (2011)