“Today is only one day in all the days that will ever be. But what will happen in all the other days that ever come can depend on what you do today” — Ernest Hemingway

In its depiction of the life of an Austrian farmer who refused to sign an oath of loyalty to Hitler or to fight in an unjust war, Terrence Malick’s (“Song to Song”) nearly three-hour film, A Hidden Life, reminds us of the power of moral and spiritual commitment. Based on the exchange of letters between Franz Jägerstätter (August Diehl, “The Young Karl Marx”), and his wife Fani (Valerie Pachner, “The Ground Beneath My Feet”), it is a sublime portrait of a man compelled to call upon his last reservoir of strength to maintain his commitment, knowing that his act of conscience will do nothing to stop the war and will put his family and his own life at risk.

The film opens in 1939 in the village of St. Radegund in Austria where Franz lives a simple life with his wife and their three daughters. Devout Catholics, they live in a close-knit community, gathering in the local pub on Saturday nights and in church on Sunday mornings. In the rich poetic style Malick is known for, we see fields of grain, pristine flowing streams, awe-inspiring mountain vistas, and children running and playing, as gorgeously photographed by cinematographer Jörg Widmer (“The Invisibles”) and enhanced by the music of James Newton Howard (“Red Sparrow”). To remind us of the context, we view grainy newsreel footage of Adolf Hitler and the Nazi annexation of Austria in 1938, an event that foreshadowed the start of World War II less than two years later.

It is clear to Jägerstätter that every able-bodied Austrian man will be forced to sign an oath pledging their allegiance to the Führer but Franz, whose father fought and died in World War I, asks Fani, “Oh my wife, what has become of our country?” In 1940, Jägerstätter is conscripted into the Wehrmacht, but is twice sent home on the grounds of his “reserved civilian occupation” as a farmer. He refuses to obey a third order, however, recalling a dream in which he saw a train carrying hundreds of Hitler Youth to their death as a warning of the evil of Nazism. In his writing Jägerstätter says that, for him, “to fight and kill people so that the godless Nazi regime could conquer and enslave ever more of the world’s peoples would mean becoming personally guilty.”

Since a referendum was held on April 10, 1938 in which an astonishing 99.73 percent of Austrians voted in favor of joining the Third Reich, it is not surprising that Franz receives little support from his neighbors or from the local priest (Tobias Moretti, “Cold Hell”). A religious man, Franz turns to the Diocesan Bishop of Linz, Joseph Calasanz Fliesser (Michael Nyqvist, “Frank & Lola”) for support but is told by the Bishop that it is not his task to decide whether the war was righteous or unrighteous. In a powerful scene, a man (Johan Leysen, “Claire Darling”) who paints murals of a happy Christ on a church ceiling laments the fear that has kept him from painting Jesus’ suffering on the cross.

In prison, Malick captures Jägerstätter’s humanity when he helps a prisoner get up from the ground after a beating and when he sneaks an extra slice of bread to a hungry prisoner. When one of Franz’ final judges played by the late Bruno Ganz (“Amnesia”) suggests that the prisoner’s principles will change nothing and that if he signs the oath he will go free, Franz smiles and says that he is already free. Though his mother, friends, and relatives try to change his mind, only Fani stands by him saying, “If I hadn’t stood by him, he wouldn’t have had anyone at all.” It is only later when he is in a Berlin prison, condemned to die as a traitor, that she begs him to sign a loyalty oath.

Malick’s point of view, however, is clear and unmistakable as stated in the quote from author George Eliot shown in the film:

“For the growing good of the world is partly dependent on unhistoric acts; and that things are not so ill with you and me as they might have been is half owing to the number who lived faithfully a hidden life, and rest in unvisited tombs.”

54 years later, on May 7, 1997, Jägerstätter verdict was annulled by the District Court of Berlin and his martyrdom was officially confirmed by the Vatican ten years later. His beatification took place in St. Mary’s Cathedral in Linz in October, 2007 and he is now referred to as Blessed Franz Jägerstätter. How many people in power today who face the same accounting will be remembered for their acts of conscience? 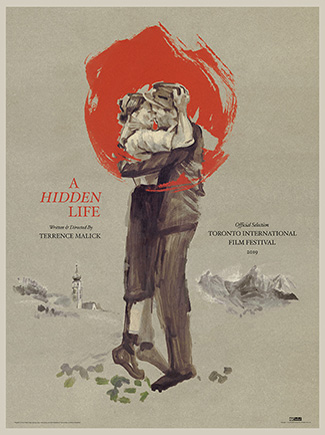