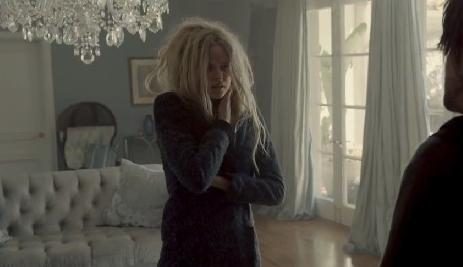 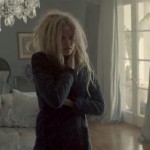 At the onset of Martin Weisz’s Los Angeles-based Squatters, two raggedy drifters awake on the beach under a lifeguard station. Dirty clothes. Matted hair. The sun slowly rises and two of the most glammed out drifters of cinema are revealed. The beauty of the girl is made abundantly clear through her cherry red lips while the boy could be mistaken for Green Day lead singer Billie Jo Armstrong. Seriously.

They are Kelly (Gabriella Wilde) and Jonas (Thomas Dekker), and they’re a couple who soon find themselves trespassing in a Pacific Palisades mansion after the owners leave for a month-long vacation. The young streetwise duo revel in their luxurious new life, but once the smoke disappears from the proverbial mirrors, they must acknowledge the truth and separate fact from fiction.

It doesn’t take long to realize there is an “interesting” style to Squatters, so it wasn’t surprising to later discover that director Martin Weisz is a successful commercial director and has worked with a variety of successful pop artists. Unfortunately, Weisz’s focus on style over substance doesn’t allow much room for the development of Justin Shilton’s flimsy script to connect nor does it help in differentiating from other “trading places” films as the standard youth angst clichés can all be found in abundance.

An early acid-dropping scene reminds of Sofia Coppola’s “The Bling Ring,” as the drifters dance on the beach after a minor robbery and don’t have a care in the world. The similarities are unavoidable.

In others scenes — all with Oscar worthy dialogue like, “Everybody can go fuck themselves” and “That’s how it works in this fucked-up world” — key sensibilities are lost. For example, while most street kids would celebrate the cracking of a safe, count the cash and hightail it from the scene, Jonas throws money in the air and remarks on Kelly’s appearance after a bath. Astonishingly, there is no reference to the safe that was just cracked, or how it was opened. In another ridiculous moment, a love scene takes place seconds after Kelly and Jonas spot a car in the driveway of the house they are trespassing in. This could be a simple editing error (or perhaps Weisz got lost in the moment and said, “Well, this will look cool”), but it’s another huge distraction and makes little sense.

To make matters worse, the film also boasts a nemesis straight out of an Austin Powers film and how convenient that the sexy drifter Kelly would end up alone in movie theater with the dashing son of the family she robbed? 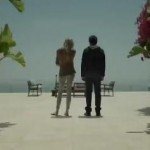 Stealing the life of luxury.

Squatters does feature a solid performance from Gabriella Wilde, who recently appeared in 2013’s “Carrie” and has the goods to become a major star. Her character doesn’t quite have the edge that one might expect from an opportunistic drifter, however, the sense of longing for a new life makes her Kelly endearing and likable and Wilde’s tender softness is undoubtedly the highlight of the film.

Thomas Dekker (“Plush”), while perhaps a talented actor in some sense, is not utilized effectively due to his troubling dialogue and unnatural natural rebel appearance. Evan Ross (“Jeff, Who Lives at Home“) stands out as the streetwise friend and Luke Grimes (“Taken 2“) has just the right amount of confidence and charm to be a potential suitor for Kelly.

In fact, Squatters would have been a much better film with Grimes cast in the lead. And with all the inconsistencies, undeveloped plot points and characters, and unintentional comedy, the film probably would have been that much better had Shilton and Weisz rethought their roles too. 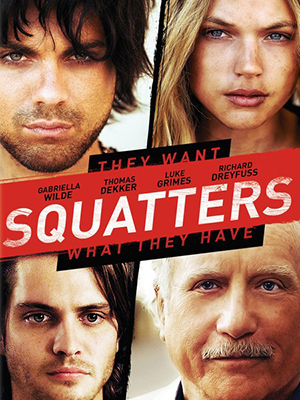