Justin Long should not wear a mustache. He shouldn’t become a walrus either, but he’s ended up in the clutches of an eccentric old man who thinks otherwise. Yep, taking “The Human Centipede” idea one step further (or backward, depending on your tolerance level), writer/director Kevin Smith, has dreamed up the horror flick, Tusk, which involves a man surgically transforming another man into a large flippered marine mammal. Hopefully, Justin’s friends played by Haley Joel Osment and Genesis Rodriguez can get to him before things get too sickeningly graphic, although from the trailer released by A24 early today I get an uneasy feeling they won’t. Check it out.

Official Synopsis:
Wallace (Justin Long), a journalist on a mission finds the story of a lifetime in Mr. Howe (Michael Parks), a worldwide adventurer with amazing tales and a curious penchant for walruses. When he goes missing in the backwoods of Canada, his best friend and podcast co-host, Teddy (Haley Joel Osment), joins forces with Wallace’s girlfriend, Allison (Genesis Rodriguez), to search for him.

Tusk transforms in US theaters on September 19, 2014. No UK release date has been scheduled. 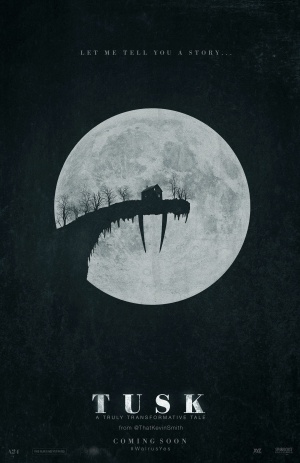