1917 is director Sam Mendes’ first film since 2015’s 007 picture, “Spectre,” and no doubt reaches the pantheon of respected war films. A Best Picture contender at this year’s Academy Awards, the film is a visual masterpiece, aided by the lens of 15-time Oscar nominee Roger Deakins, strong direction and an uncompromising look at No Man’s Land from the trenches of World War I.

The awards darling is perhaps most notable for its expansive look at the frontline, shifting young soldiers from claustrophobic muddy pits to yards of coiled barbed wire, abandoned lengths of enemy territory, a seemingly peaceful country home, a fiery village, corpse-laden waters and much more. These settings alone take center stage as relative newcomer George MacKay (“Ophelia”) teams up with “Game of Thrones” alum Dean-Charles Chapman to deliver a pivotal message to the Second Battalion of the Devonshire Regiment, which is just hours away from stepping into a German-laid trap.

The end credits of Mendes’ project say he drew inspiration from his grandfather and the tales that have been passed along to his generation. This is clear, as Mendes opts for emotion and character-building, versus a focus on overall conflict and perhaps trite storytelling. Sure, those moments where brave British soldiers plunge “over the top” are exquisite — and, if done right, this is true of any World War I film. Yet, where 1917 sets itself apart is in its careful attention to detail and an anecdotal take on events of the Western Front; for Will Schofield’s (MacKay) experience weaving into and between disparate German units would be far different than other lance corporals, officers, and others.

This principle seems to align with “The Lord of the Rings” helmer, Peter Jackson’s, 2019 documentary, “They Shall Not Grow Old,” which also traced the emotional status of young soldiers on the front — in lieu of political turbulence and military strategy. Most soldiers were unaware of the latest political schemes — instead simply cast into the “meat grinder” that was the attrition-fueled Great War. These films, along with another recent project, “Journey’s End,” certainly add depth to the conflict’s ever-growing oeuvre. Similar to 1917, Saul Dibb’s “Journey’s End” retraces the footsteps of a young soldier and his shrinking unit. Both films are a masterclass in visual arts and the minutiae and emotional tug-of-war of these global campaigns.

More specifically, 1917 and its impressive ensemble begins with Colin Firth’s (“Kingsman: The Golden Circle”) General Erinmore summoning Schofield and Chapman’s Lance Corporal Tom Blake for a top-secret mission to pull back the Devons’ Second Battalion before they are torn apart by a strategically relocated German front. With field telephone lines cut, there is only one way to access the regiment, led by Colonel Mackenzie (Benedict Cumberbatch, “Avengers: Endgame”): A hand-delivered message. Erinmore taps Blake and Schofield for the daring mission.

The duo quickly traverse the British line for the best exit point — the top of a trench that just nights before spilled immeasurable British blood — and set off with their weapons, a flare gun and official postage from the General. What Schofield and Blake subsequently see is nearly indescribable, from drowned allies, dead animals, abandoned properties, mountains of artillery shells and a downed enemy fighter pilot. Following a swift and harsh tragedy, Schofield becomes doggedly determined to reach the front and prevent the loss of 1,600-plus lives. He’ll encounter sporadic German fighters, incredibly muddy trails, a mobile British unit and a kind French woman and orphan, holed up below ground with just a fire and German leftovers for sustenance. The question is: Will he defy odds and reach Mackenzie, along with the other Blake brother (another “Game of Thrones” alum, Richard Madden)?

Mendes and Deakins made another bold artistic choice, to boot: Presenting the film as one long take, devoid of choppy cuts, flashbacks, etc. The result is mesmerizing, allowing for immense character growth and “proximity” to these living, breathing fighters of the Lost Generation. Deakins, no doubt, is worthy of his latest Oscar nomination. His filmmaking prowess on 1917 and Mendes’ narrative vision will make the work something long studied by film students and scholars alike.

However, at times, the film appears to skew a bit too far toward Schofield’s perspective, but the bold point of view choice ultimately pays dividends, showing that the action is more about a heroic act that can go largely unnoticed in an enormous and wretched campaign that took around 20 million lives.

Suffice to say, viewers will see Mendes and Deakins take the Oscar stage; but beyond its run at the box office, 1917 will stand as a powerful testament to the brutality and pointlessness of warfare for decades to come. In fact, it is — where it rightly belongs — likely on many critics’ shortlist of top war films, rivaling the likes of “Saving Private Ryan,” “Apocalypse Now,” “Dunkirk” and “The Thin Red Line.” 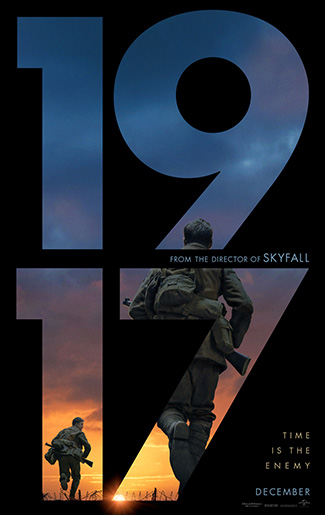