Released nearly two years ago, it turns out that Hell House LLC wasn’t the complete package. Some intended VFX shots for the final sequence were never completed, and investor anxiety over breaching the 100-minute mark meant eight minutes of characterization was shaved from the original release. This “director’s cut,” which I saw, reinstates some of those changes.

In a small town in New York state, known with Biblical foreboding as “Abaddon,” a group of young entrepreneurs (barely distinguishable, frankly, from a group of teenagers on a cabin-in-the-woods trip) move into a ramshackle hotel. Its homicidal history only adds to the excitement of their project: They’re transforming the place into the ultimate, gore-drenched haunted house experience.

The fixer-upper action is framed within a faux documentary. The filmmakers have snagged an interview with a survivor of Hell House’s latest grisly incident; and that individual happens to have a bag of home videos, recorded by the terror team themselves. We’re here to see the content of these tapes, and the tragedy that unfolds.

In retrospect, I can’t help wondering if the documentary framing device might be surplus to requirements. Do we really need a local cop telling us how mysterious and scary the events inside the Hell House were? The best found footage, I find, is claustrophobically self-contained and deliberately limited in its context-building. If ever there were a sub-genre whose strength was in the show, rather than the tell, it’s surely this one.

Still, the actual scary stuff inside the house is nicely handled. The cheesy fairground setting is a hoot: A bounty of red herrings skulking amidst a cast of dead-eyed dolls and blood-weeping masks. There’s nothing particularly new about the setup — high-fiving extroverts violently silenced by ghostly forces with an uncanny sense of gradually building tension — but the setting certainly freshens things up.

Found footage horror can have the unique quality of rendering its main characters either frustratingly vague or extravagantly irritating. But overall, writer-director Stephen Cognetti does a decent job of toning down the obnoxiousness and injecting his characters with contrasting emotions and believable motivations. The simple fact that they choose to stick together in times of fear means it’s more convincing than half the horror movies out there.

The characters are consistent and well-sketched. There’s Alex (Danny Bellini, “15 Minutes of Faye”), company founder and leader, who is willfully blind to the heightening weirdness of the hotel — which is not surprising, given his literal investment in the place. And there’s Paul (Gore Abrams, “Let Me Make You a Martyr”), a nerdy misogynist creep who yearns for female companionship, only to receive it — in the film’s most effectively freaky moment — in a terribly unwelcome way.

Cognetti shows an admirable aversion to cheap jump scares throughout Hell House LLC, and provides a range of effective, if familiar, horror tricks. Some — such as the unreliable presence of the world’s least joyful clown — are truly chilling. Other moments, however, are less effective — one “shock” involving a poorly Photoshopped Google Street View picture is downright laughable.

The film is a reasonably slow burn, creating tension with the genre-standard repositioned objects/figure-in-background tropes. Cognetti has an unusually keen eye for the uncanny, constantly inserting subtle visual inconsistencies into the frame. The effect is unsettling — which makes the inevitable yelling chaos of the final act somewhat disappointing. Opening night is less of a descent into hell, and more of a descent into panic.

Smartly made, nicely acted and well-paced, Hell House LLC is a very tight and sometimes very scary found footage horror. Without the needless documentary framing, and with a more disciplined ending, perhaps the sense of mystery and ambiguity could have haunted us beyond the final credits. Regardless, it throws everything and the blood-filled kitchen sink at the screen, all delivered with aplomb, so there’ll surely be something here to horrify genre fans this Halloween. 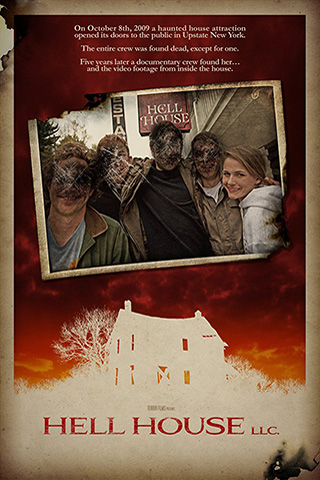