Nowadays, we could probably use all the knowledge and understanding of mental illness that we can possibly obtain, so Cyrus Trafford’s well-intentioned short film, The Voice in the Head, certainly has something meaningful to offer. The 12-minute piece uses a young woman’s final exam essay question in a psychology class to probe our perception of sanity and insanity and the razor-thin definitions that separate them.

The University of London student (Charlotte Luxford, “It’s Not Custard”) personalizes her answer to the exam question, which Trafford then underlays with a flashback account of how the student once viewed an apparent “crazy woman” (Stella Willow, “The Night of the Procession”) — disheveled and talking aloud to herself — while riding the Tube and then happened to follow her around the city streets after they both get off at the same stop.

Luxford narrates the whole experience as the camera floats solemnly along London streets, leaving us to wonder where this is headed. Trafford’s goal is simply awareness, which is a modest aim that the movie still somewhat misdirects by adopting a mood and tone more regularly associated with mystery thrillers. We can sense a twist ending of some sort lurking around each corner they turn, so that becomes the focus instead of a more tangible emotional connection.

This is all part of Trafford’s plan to surprise us with his suggestion and the protagonist’s realization that mental illness is a more complex and far-reaching problem than the general consensus implies with a straight forward question like, “If sanity and insanity exist, how shall we know them?” While he might have a point, his ability to articulate that point is arguably overwrought.

The Voice in the Head is a noble effort, but not the powerful eye-opener it purports to be. Trafford’s observations appear relatively mundane in the end, despite an overly dramatic presentation that suggests we’re witnessing the unveiling of some great hidden truth. The result of all this effort and insistence is a pretty picture with a big heart. While its honesty is honorable, this attempt to educate (or at the very least open a dialogue) provides more illusion than insight. 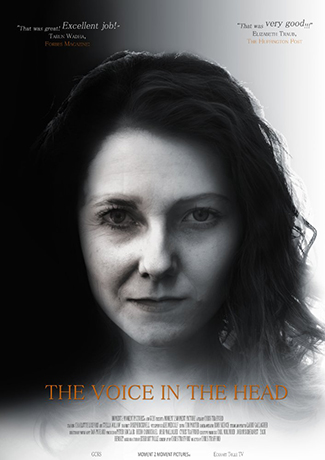