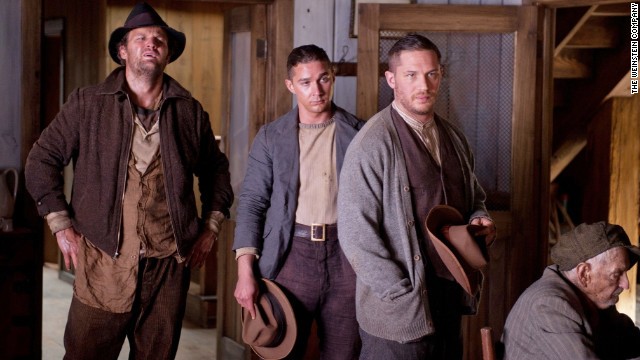 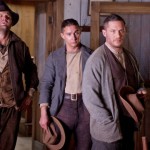 For a movie about moonshine makers, you’d think Lawless might have a bit of a kick. And maybe some flavor. But no, this poorly calculated picture is devoid of such pleasures, instead settling for a generic blandness. At best, it’s like eating a sock. You’ll be craving some of that bottled moonshine being passed around on screen just to give your taste buds something to do. There’s hardly a moment in Lawless that hits its mark, barely an idea that doesn’t feel doused in cliché. Lumbering from one scene to the next, the movie is a pacing nightmare and the plot feels carelessly strewn together with a bunch of simplistic characters locked in a basic battle shot with lazy indifference.

Those may be harsh criticisms, but with the talent in front of and behind the camera, Lawless really has no business being so bluntly bad. Director John Hillcoat continues his fall from the solid peak he reached with Aussie western “The Proposition,” a meaty effort he followed up with a misbegotten adaptation of Cormac McCarthy’s poetic post-apocalypse tale “The Road.” That movie had some decent imagery, but it struggled to realize the poetry of the material in an effective manner. Hillcoat again attempts to bring a poetic voice to the big screen with Lawless, but all we get is some uncomfortably intrusive narration by Shia LaBeouf.

Teaming again with Nick Cave, Hillcoat’s regular composer collaborator and sometimes screenwriter, too (Cave wrote the strong script for “The Proposition”), should at least reap some benefits, but the score isn’t all that interesting and Cave’s screenplay, adapted from Matt Bondurant’s non-fiction book “The Wettest County in the World,” is a sopping, sloppy slog. There’s no spark to the narrative here and no attempt to establish the situations with any imagination or even gusto. The plot is so stubbornly stuck on template-set tracks that it fears crashing and burning if it so much as puts one toe off the chosen path and into refreshing territory. Personally, I think the movie could have used a little more chaos.

It would be seemingly fitting, given the chaos that apparently punctuated the lives of bootlegging brothers Jack (LaBeouf), Forrest (Tom Hardy), and Howard (Jason Clarke), who kept liquor flowing during the prohibition era with their homemade stills stashed in the hills of Virginia. The brothers were pretty much above the law for a while, but early in the movie, conflict comes into play when greasy Chicago cop Charlie Rakes (a ridiculously reptilian Guy Pearce) rolls into the area and demands a piece of the moonshine pie. Forrest, a man of few words and many punches, turns Charlie down and therefore incurs the wrath of the laughable villain.

Lots of scenes follow where the brothers scrunch up their faces and stand their ground, while subplots involving love interests played by Mia Wasikowska and Jessica Chastain eventually show up and soon fall flat because the women have nothing to do but smile or stare longingly at their men. Their co-stars also struggle with badly written parts, though Hardy comes closest to achieving something memorable. His mumbling line deliveries and comical grunts are at least mildly interesting and the actor’s intimidating presence often plays a factor in scenes involving opposition. Clarke doesn’t fare too well and LaBeouf is just trying far too hard to be taken seriously. Pearce is a joke that only gets funnier as the movie progresses. He’s a wildly flailing punch line in his final scene. 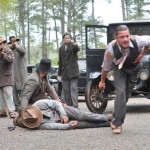 Dane DeHaan actually makes a fine switch from his angry supervillain role in early 2012 hit “Chronicle” to play an innocent pal of LaBeouf’s Jack and Gary Oldman fits nicely into a gangster role that’s woefully small, so a couple cast members do manage to get through this dreck with their dignity intact. But it’s not like any of the performances are particularly great. There’s a thin line between what works and what doesn’t here and the closeness of success and failure on the acting front can be traced back to the script and to Hillcoat’s direction.

That’s where the movie’s main problems lie. The story plods along as the three brothers argue and the occasional burst of violence is unleashed. After a while of really going nowhere, the movie lurches lazily when Cave and Hillcoat try to inject some energy by jamming a montage sequence into the proceedings. Yeah, that’ll liven things up! Once that lame dip into the cliché grab bag is exhausted, the movie mercifully lumbers toward a conclusion that’s all too predictable right down to the details. It’s not hard to guess where this is all headed right from the start, but it’s as though Hillcoat wants to ensure that the predictability touches every aspect of the finale.

Lawless is a blah mess. Despite talented actors on screen and a director/screenwriter team who have worked well together in the past, this tale of moonshiners and gangsters and crooked cops is a blasé bore. It wants to be an intimate portrait of the Bondurant brothers and their brutal experiences, but it’s too busy playing everything by the book and cutting away to make us hate the villain or swoon for some romance. Still, the brutality is certainly on display here: Forrest has enough near-death experiences to fill several movies, but thankfully they’re all contained in just one. When the violence hits, it’s ugly and rugged. The attempted authenticity is admirable. It just doesn’t count for much when so many characters are underwritten and the whole picture is shot and edited so obviously — a constant reminder of how bland and forgettable this movie is. Everything in Lawless is visible from a mile (or at least an hour) away. Ugh, what a waste, what a dull taste. Now where’s a good drink when you need one? 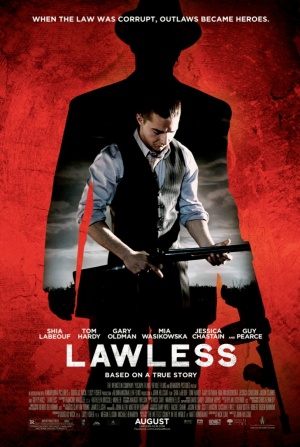