It is fitting that there are two competing readings of François Ozon’s Double Lover. The film dually presents as a highly stylized, seductively sleek French psychosexual thriller and this “I Know Who Killed Me”-esque overtly overly symbolic camp. Not wanting to assign one dominance over the other or perhaps unable to distinguish between apparent equals, I shall mimic our protagonist Chloé and endeavor to do both.

Chloé (played by Marine Vacth, herself the double of Natalie Portman at certain angles) is a troubled twenty-five year old Parisienne, who is battling chronic undiagnosed stomach pain and an overbearing mother. The former model, having become disenchanted with an industry that centers around being observed and objectified, is introduced through a peephole lens effect while having her long hair chopped into a chic new do. The quick early transitions from peephole to pap smear to naked eye immediately inform the viewer that while we are watching her story unfold (with countless boundaries pushed and privacies invaded), she’s flipped the gaze and is now watching, too. Ozon’s clinical approach shows us more of Chloé than any non-medical professional has a right or want to see. Observing no apparent medical reason for her pain, Chloé’s gynecologist recommends a return to therapy, having decided she needs more than a pelvic exam to fix what ails her.

During these psychoanalysis sessions, Chloé talks openly to her nearly silent psychiatrist Paul Meyer (Jérémie Renier, “The Unknown Girl”). They are staged on equal footing, occupying the same amount of space in his office, facing off in identical chairs. Though, Chloé appears to do the heavy lifting during their sessions as she comes to terms with her mommy issues and lack of purpose. With Chloé admittedly healed, Paul admits to catching feelings and confesses that she would be better served by a more impartial analyst. They quickly fall in love and move in together.

With her new beau, old cat (Milo), and even older noisy neighbor entering her orbit, Chloé takes a part-time job as a museum watchwoman (a truly voyeuristic title if there ever was one). The museum’s current exhibition, entitled Flesh and Blood, consists of large scale sculptural models of body parts among other anatomical set pieces. This motif is carried throughout Double Lover as characters act on carnal desires and struggle to differentiate the corporeal from the abstract.

One day on her way home, Chloé glimpses Paul — or his suaver non-bespectacled doppelgänger — embracing another woman. At home, she confronts Paul about the encounter only to have him deny it. Questioning his truthfulness and her perception of reality, she returns to the scene to find the office of another psychiatrist, Louis Delord. Early on, Paul has been tight-lipped regarding his past and family only revealing that he changed his last name from Delord to his mother’s maiden name following some bad press having to do with his father. Chloé books an appointment with this other Delord (also played by Renier) while standing below the entangled tree branches of a museum exhibit, setting up the main conflict of the film and foreshadowing the entanglement to come. The next two acts follow her obsessions and competing relationships with these twin brothers.

The production design of Double Lover is impeccable, if a little over-dramatized and exaggerated. Not one to leave a good symbol underrepresented, there are symmetrical identical chairs in psychiatry sessions, twin bedside tables with matching lamps, and mirrors on every surface of Louis’ office, which deliver a disorienting funhouse effect during Chloé and Louis’ “sessions.” The mirrors also exist as a means for watching themselves engaged in sexual activity. To Chloé, watching is more pleasurable than the physical act. For a film predicated on voyeurism and the exploration of one’s most repressed desires, there was something unsettling and unsexy about the sex scenes. Between the disturbing sound design, over pronounced kissing noises, literal flesh and blood, and more swapped saliva than when Sarah Michelle Gellar taught Selma Blair to french all those years ago, I found myself watching with a stare blanker than Chloé’s beloved cat. These moments are darkly comedic and played as such. Milo’s parallel voyeurism and numerous gross out moments elicited shocked guffaws from my retiree-filled weekday matinee screening. The audience serves as the counterpoint to Chloé’s voyeur, bearing witness to graphic sex scenes and dreamy orgies, though receiving no gratification from said acts.

The film, based on Joyce Carol Oates’ “The Lives of Twins” and slyly published under a pseudonym, follows the same basic conceit of its source material. Both make illusions to Chloé uncovering a dark family secret. Book blurbs are designed to be mysterious and to compel the reader to desire more. Double Lover follows that same principle, though it is impossible for me to work through this film without spoiling it. And it turns out the dark family secret belongs not to the titular double lovers, but to Chloé.

Chloé is left to puzzle through her complicated feelings for both brothers, but the real mystery is why they no longer have a relationship with each other. In competing for her affections, Louis plants a seed in mentioning a former classmate of theirs and leaving a possible clue as to the circumstances of their falling out. Chloé pays a visit to Sandra Schenker (Fanny Sage), a young woman driven to shoot herself after Louis, under the guise of her boyfriend Paul, raped her. The suicidal act was ultimately unsuccessful but left Sandra in a vegetative state and under the care of her mother. The consensual yet falsely pretentious act sowed doubt and distrust, and severed the relationship of the twin brothers. Chloé briefly sees herself in Sandra, a psychic twin leading a disturbingly parallel life.

The final reveal that Sandra’s mother is also Chloé’s implies the encounter never occurred and thereby calls Louis’ entire existence into question. The mind reels and I am immediately reminded of the fake plastic orchid in the lobby of his office, which stemmed in clear contrast with the real potted plant in Paul’s. Of course, none of this was real. When seeing Louis, Chloé lies to Paul about the identity of her new therapist. She claims to be treating with Paul’s colleague, Dr. Wexler (Dominique Reymond, “Diary of a Chambermaid”), a published psychiatrist with respect to dream analysis. Double Lover is dream-like in that it scraps subtlety in its representation of subconscious desires and blurs the lines between imagination and nightmarish reality.

In the end, Chloé’s stomach pain was caused by the undeveloped twin sister she absorbed in utero. She had the mirror twin, not Paul. I would argue that Louis was an invention of Chloé’s tormented psyche — the psychological manifestation of her physical pain. This theory is further supported by Peter’s continued denial of the existence of a brother, the false orchid, and the same actors playing multiple roles, i.e., Jacqueline Bisset as Mme Schenker/Chloé’s mom and Dominique Reymond as Dr. Wexler/Chloé’s gynecologist. Even the idea of a mirror image suggests that one likeness is a false representation, a flat and one dimensional reflection of something real. Louis was also a manifestation of Chloé’s desires and showcased the way she subconsciously viewed herself. He was dominant and seductive where Paul was sensitive and loving. There are, of course, multiple interpretations. And if we are to believe that Louis is a symptom of Chloé’s imagination and repressed desires, then his invention serves to both reinforce and undermine the film. For confirming the falseness of his storyline ultimately deprives Chloé’s of meaning, too. 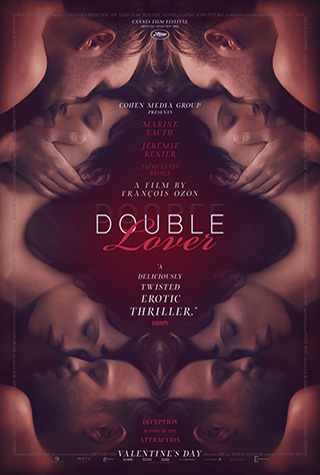